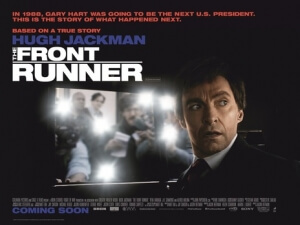 BASICALLY…: In 1988, Senator Gary Hart (Jackman) finds his campaign to become the Democratic Presidential nominee to derail when reports of an affair begin circulating the press…

Politics in general right now is such a draining experience that nobody wants to be reminded of it when sitting down to watch a movie; case in point, Jason Reitman’s The Front Runner which debuted at film festivals – including the BFI London Film Festival back in October, where I first saw this film – to a rather lukewarm response from critics, and was scheduled for a US release on Election Day only for the movie to bomb hard when nobody turned out to watch it (it ended up grossing $56,000 in its opening weekend and to date has only made just over $2 million domestically, a pretty horrendous result for a hopeful awards contender). Whether or not they were busy voting that day instead isn’t the point; the fact that nobody bothered to go and watch it, especially with a huge star like Hugh Jackman in the lead, is undeniable proof that in a time when politics is now officially stranger than fiction, nobody wants to go see a film that reminds them of how miserable being in politics can be.

Then again, it could have bombed for a number of reasons, one of them being that the film is an absolute slog that never really takes off, somehow managing to be even more underwhelming on a second viewing, largely due to knowing going in that it’s not going to be an especially good movie, but even then it never dawned on me until seeing it again just how tiresome and frankly depressing the whole experience was.

The film chronicles three weeks of Senator Gary Hart’s (Jackman) 1988 campaign to secure the Democratic nomination for the forthcoming Presidential election; Hart starts out as the undisputed front-runner, double-digits ahead of the other candidates and turning in one good PR move after another. However, it all begins to crumble when reporters of The Miami Herald are tipped off that Hart is having an affair with a young woman named Donna Rice (Sara Paxton), and after accosting the Senator they run the story which soon attracts the attention of the entire press, causing Hart’s campaign to eventually wither and die as the Senator’s policies are eclipsed by the exposure of his private life.

In my earlier review, I noted how the movie had a lack of focus, incorporating several perspectives of the ordeal including from Hart and his family, his campaign team, reporters at The Miami Herald and The Washington Post, and a female campaigner tasked with looking after Rice when she comes into the picture, and how it didn’t really care to explore how or why this particular event is considered by the filmmakers to be major enough to warrant a big-screen dramatization. On a second viewing, the film feels even emptier in its efforts to try and give itself a more meaningful reason for being, because barely any of the drama is made out to be truly hard-hitting and it comes out as black-and-white instead of in full colour as a result of this thin and uninteresting script. Again, I question why Reitman chose to follow up Tully, one of his strongest movies in years, with a movie that’s considerably one of his most lacking; this movie has none of the drive or real emotional gut-punch that most of his other films contained, and although I imagine he and the rest of his crew meant well by making it, it’s still an unfortunate dud that makes us wish for more hard-hitting fare from the director in the future.

I also didn’t really notice until this second viewing of the film how it seems to paint the media in a very unflattering shade, which given the current President’s disdain for the media is worryingly close to tipping itself over into anti-news propaganda territory. The vast majority of the reporters in this film are written to be such seething, cynical scumbags that resort to staking out Hart’s private Washington residence after stalking Rice from the airport to the location, harassing Hart as well as his family and campaign members, distorting out-of-context quotes from Hart about allowing the press to follow him around, and all while acting smug and self-satisfied about what they’re doing. It’s an extremely questionable portrayal of the media, which for all I know could very well be how they acted at the time, but how they are depicted in this film is the most black-and-white representation in a film that clearly writes them as antagonistic figures while the politicians caught in the middle of the scandal are somewhat heroic. It’s made even more problematic by the fact that someone in this day and age who sees this film and how it essentially paints the media as parasitic leeches, and who also happens to believe every single word that comes out of the current US President’s mouth, could very well be inspired to adapt an incorrect attitude toward hard-working journalists which could, in the most extreme cases, lead to violence.

That alone makes this a more uncomfortable sit than it was the first time around, since not only was it pretty dull with very little going on that’s interesting enough to hold your attention, but its rather irresponsible depiction of the media, especially in a time when the President is publically declaring them to be an enemy of the people, is extremely unsettling and thoroughly misguided; at the very least, make them actual human beings instead of the scumbags they’re depicted as being here. I’ve not seen Reitman go this far into anti-progressive propaganda since Men, Women and Children, which is still a worse film than The Front Runner is but is just as clueless to the world at large as that film was.

The Front Runner is a deathly dull political drama that paints a very black-and-white picture of Gary Hart’s disastrous Presidential campaign, especially when it comes to its rather irresponsible depiction of the media which doesn’t sit too well in today’s anti-news environment in politics.