The French Dispatch (LFF Review) – The Most Wes Anderson Movie Yet? 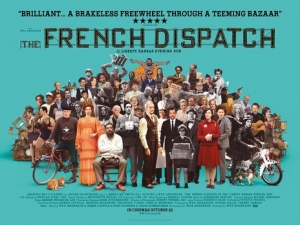 BASICALLY…: A series of stories by journalists for the revered publication The French Dispatch…

This review of The French Dispatch was conducted as part of the BFI London Film Festival 2021.

By now, you should know exactly what you’re going to get when you walk into a Wes Anderson film. His quirky filmmaking and storytelling style has become so iconic that simply being asked to describe one of his movies is like pointing to the Mona Lisa in the Louvre; you just know it is what it is almost immediately without even thinking about it. Somehow, though, Anderson has yet to truly show signs of fatigue with his signature fashion, with even his latest – and perhaps most intricate to date – film The French Dispatch finding interesting new ways to keep a potentially stale technique feeling fresh and engaging.

The French Dispatch is, without a doubt, the most Wes Anderson movie yet made. It has all the expected hallmarks of an Anderson movie – artsy framing, a droll sense of humour, Bill Murray and Owen Wilson among the cast, and plenty more – but also a vastly different narrative approach which is somehow still entirely in his wheelhouse. Most of all, though, whatever whiffs of pretension you may get from his work – and I am fully aware that there are just as many people out there who don’t like Wes Anderson movies than there are that do – are quickly waved away because it is still an entertaining movie to watch, and that’s very much the case with this one too.

The film foregoes the traditional three-act structure, or really a thorough plot, in favour of sections from the fictional publication The French Dispatch of the Liberty, Kansas Evening Sun, which has been overseen for years by its editor Arthur Howitzer Jr. (Murray) in the equally-fictional French city of Ennui-sur-Blasé. The issue we are watching unfold is the final one, for it comes after Howitzer Jr.’s death – the movie opens with an obituary setting up the history of the editor and his publication – and, in accordance with his will, all production on further issues is to cease immediately. That’s just the set-up, by the way, for the rest of the film where we see journalists’ stories – and a brief travelogue of Ennui-sur-Blasé narrated by Owen Wilson – play out in true Wes Anderson style, making for a unique framing device that pays tribute to both the revered publication The New Yorker, and hard-working journalists in general, with an anthology of stories that only the auteur (along with Roman Coppola, Jason Schwatzman and New York Times illustrator Hugo Guinness) could come up with.

The first entry is called The Concrete Masterpiece by art journalist J.K.L. Berensen (Tilda Swinton), which details the story of incarcerated artist Moses Rosenthaler (Benicio del Toro) and his prison guard model and muse Simone (Léa Seydoux), who become sensations in the art world for his eye-catching portraits. Of the three stories that The French Dispatch has to offer, this one is the most straightforward in terms of its plot, and is clearest in setting up certain character dynamics from del Toro’s tortured artist to Adrien Brody’s snivelling art dealer. It certainly dives into satirical territory when showing the intricate and pretentious ways in which Brody and his associates interpret the imprisoned painter’s work, and more often than not there are good laughs to be had at some of the visual and physical humour that come with chunks of the story. Plus, getting to see Benicio del Toro as an eccentric artist is pure magic, whether he’s strapping himself to an electric chair due to his typical tortured nature, or chasing down Adrien Brody in a wheelchair as wacky music plays on Alexandre Desplat’s bouncy soundtrack.

Next up is Revisions to a Manifesto by Lucinda Krementz (Frances McDormand), which sees her following the actions of student revolutionaries who are seeking to crumble the status quo and implement fiercely left-wing new societal rules like having men be allowed to go into ladies’ dormitories. Krementz ends up having a brief affair with Che Guevara-like student leader Zeffirelli (Timothée Chalamet), which is only one of many things happening in this story, by far the most complex and layered story of the anthology. That doesn’t make it the easiest to follow, since a lot of the details such as what it is the students are actually rebelling for are (perhaps intentionally) largely left to the imagination, which could possibly be Anderson’s way of commenting on the current radical left-wing activism in our modern society, or maybe it’s all just a bit too convoluted for its own good. At least both Frances McDormand and Timothée Chalamet are having fun with Anderson’s heavily-composed writing and direction, though.

It is down to the final story, entitled The Private Dining Room of the Police Commissioner by food journalist Roebuck Wright (Jeffrey Wright), to bring things to a sombre and even emotional conclusion. This story sees Wright witness first-hand the events of an evening where he is invited to dine with a commissaire (Mathieu Amalric) and his private chef, the revered police officer Lt. Nescaffier (Stephen Park), which is interrupted when kidnappers – among them Edward Norton and Saoirse Ronan – abduct the commissaire’s young son Gigi (Winston Ait Hellal) and hold him for ransom. This one is much more of a caper than the others, closer to Anderson’s The Grand Budapest Hotel in terms of its energetic but ultimately meaningful spirit, and features a 2D-animated car chase sequence which is the closest we’ll ever come to a Wes Anderson action movie. However, unlike the other stories, this one is anchored by a central performance from Jeffrey Wright, who is utterly captivating as a fictional composite of James Baldwin and A.J. Liebling that you’re both charmed by but also very sympathetic towards for a lot of things we find out later about his character. Wright even gets his own dedicated wraparound segment in the style of a television interview with Liev Schreiber, any clip of which would be most suitable for a potential awards clip should he and his performance be recognised over the coming months (which, hopefully, it will).

With all the stories that he is putting forward, Wes Anderson has made a jam-packed love letter to a bygone era of journalism that has clearly served as a great influence on his own work, while also making a reasonably entertaining anthology movie that only he could have made. As ever, his is a mesmerizingly crafted piece of cinema from the cinematography to the sets all splendid to look at, with even the inconsistent aspect ratio and shifts from black-and-white to colour feeling very much in line with a typical Anderson archetype: unexpected, and sometimes random, but always certain of what it wants to say and do. The handsome craft and intricate storytelling should not come as a surprise to those familiar with the filmmaker’s work, but detractors will be highly unlikely to be swayed by this one, which I can see dividing even some of Anderson’s most loyal audience members for its untraditional narrative which can seem odd even for someone like him.

Nonetheless, Wes Anderson is back with his most Wes Anderson movie yet, which can never be an entirely bad thing.

The French Dispatch is Wes Anderson’s latest, and most intricately crafted yet, movie which pays loving tribute to the journalists of a bygone era in an anthology of stories where some work better than others, but are made consistently fascinating to watch based on Anderson’s typically detailed filmmaking and eccentric (though potentially divisive) storytelling structures.

The French Dispatch will be released in cinemas nationwide on Friday 22nd October 2021 (as of publication).