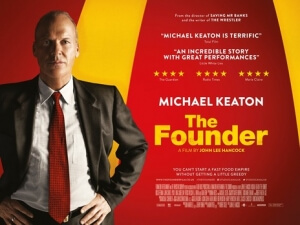 It’s one of the most famous companies in the world, with millions of people around the world buying and eating its products every day (or roughly 1% of the world’s population, according to the text during the end credits of the film), but even McDonald’s had a less than smooth transition to the big leagues, as we discover in the big-screen recapping of its rise to glory, which is a story of betrayal, greed, and Michael Keaton at his sleaziest.

The Founder, based on an original script by The Wrestler’s Robert Siegel and directed by Saving Mr. Banks filmmaker John Lee Hancock, sees Keaton play Ray Kroc, who at the start of the film is a struggling salesman in 1950s America who can’t seem to get anyone on board with the milkshake mixers he’s selling. He’s understandably frustrated with things going nowhere, until he gets an order for six mixers (a mistake, he initially thinks, since no diner could possibly have the capacity for six of the things, let alone one) to go to a small family business called – what else? – McDonald’s, run by brothers Dick (Nick Offerman) and Mac (John Carroll Lynch). Kroc is immediately wowed by their revolutionary business, and persuades them to franchise the restaurant to make more money than they’re already receiving – thus begins the long, slippery slope that pushes Kroc and the business more into the spotlight, and pushes the brothers slowly but surely out of power within the company they set up.

It is an entertaining movie for an number of reasons, one of which being that it’s surprisingly interesting to see how this global empire actually came to fruition. There’s a rapid-fire scene where the brothers explain the true origins of their initial restaurant, which given its content and some of the wacky things that happen along the way could actually be a movie in and of itself, and it’s delightfully quirky enough to keep your intrigue and, despite knowing exactly where this will all end up, makes you really root for these guys to succeed. However, this film is much more interested in how McDonald’s became the multi-million dollar corporation it is today, and again there is a great deal of interest in seeing how Kroc manipulates things to his own end, from starting a scheme that charges restaurant managers rent for the land on which they sell the food, to implementing a powdered-milk substitute for the milkshakes instead of the more costly method of using actual ice cream, and it’s all at once devious but actually fascinating. Even though this is the kind of film that’s been made before, about a small-time business which via shady tactics and ultimate betrayal became a giant in the industry, it still keeps your interest because the film knows exactly what the right things are to focus on, and delivers them in an entertaining way that ensures your intrigue is never lost.

Keaton is great fun as this utter sleaze-ball of a character, manipulating the work ethics of these hard-working, honest businessman brothers to essentially hand over the company to him, and doing a lot of other things that make him a rough figure to like, such as mistreating his neglected wife (Laura Dern) with his increasingly narcissistic behaviour, hitting on the wife (Linda Cardellini) of another business partner played by Patrick Wilson – right in front of him, no less – and constantly going behind the brothers’ backs to further his financial gain, not caring about the contract that he initially signs. But no matter how sleazy and unlikeable this character gradually becomes, it’s Keaton’s enthusiasm and smarmy sense of self-confidence he brings to the role that always makes the character endlessly watchable. Think of him as the all-smiling boy-scout equivalent of Daniel Plainview from There Will Be Blood; as a matter of fact, the whole movie is basically that film if it were about McDonald’s, right down to the fact that the ending also involves milkshakes. That right there should make the film even more entertaining to sit through.

However, while it is an entertaining sit with an equally fun lead performance, The Founder still doesn’t quite feel like it’s pushing many boundaries when it comes to this type of story. As mentioned earlier, this kind of story has been done many times before, and although it’s done well in this case there’s still nothing that this film says about the cutthroat nature of building a business and franchise that hasn’t been said many times previously. While you’re left with an undeniably fascinating movie, don’t go in expecting it to say or do anything new with this kind of cautionary tale – though it has to be said that, for a film about a fast-food company, there’s not a whole lot of bite to it.

But like with any typical McDonald’s, you still can go into The Founder expecting a satisfying product to chew on, and odds are you’ll come away with a full stomach and your taste buds utterly delighted.

The Founder might not be the freshest item on the menu of films about the cutthroat nature of businesses, but you’ll come away feeling satisfied and entertained by its surprisingly interesting details surrounding the rise of McDonald’s, as well as an energetic lead performance by Michael Keaton.