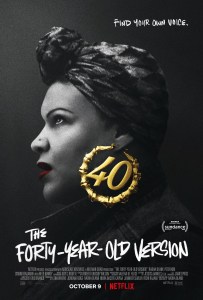 BASICALLY…: A struggling playwright (Blank) reinvents herself as a rapper, and finds her creative voice in the process…

Although its title is obviously a play on The 40-Year-Old Virgin, Radha Blank’s energetic debut surprisingly shares a few things in common with the Judd Apatow comedy; both are about protagonists in the autumn years of early adulthood who are desperate for a breakthrough in life-long goals, both have a ton of heart amidst the crudeness, and both are extremely funny. However, Blank’s The Forty-Year-Old Version doesn’t come with a hilarious chest-waxing scene, which might sound like a knock against it but in fact, it’s entirely complimentary that the film doesn’t stoop to those levels to mine some thoughtful, even provocative laughs from a unique situation about modern artistry with, fittingly enough, a unique voice to tell it with.

Blank directs, writes, produces, and stars in the black-and-white film, as a New York woman named Radha (massive stretch, I know!), who was previously among the “30 Under 30” upcoming playwrights but now, as she approaches the big 4-0, is stuck in a dead-end job teaching drama to local teens, with her new gentrification-centric play Harlem Ave either being rejected by her fellow black theatrical types, or condescendingly scoffed at by the dominant white upper-class regime. Fed up with her career going nowhere, she returns to her early passion for rap and, donning the stage name RadhaMUSprime, teams up with younger beat producer D (Oswin Benjamin) to come up with hard-hitting new verses, while also facing personal crises about artistic integrity when a smug white theatre producer (Reed Birney) offers to bring her play to the stage, but with heavy compromises for a more diverse audience.

Clearly evoking the spirit of early Woody Allen, Spike Lee and Noah Baumbach (from its black-and-white cinematography to the slick New York backdrop), Blank’s film owes stylistic cues to those filmmakers but also finds enough wriggling room for her own voice to shine. As a director and writer, she uses a strong sense of humour to satirically attack the white colonialism of black arts – at one point, two elderly white women converse about a mixed-race adaptation of August Wilson’s Fences, while movie-Radha also gets asked to write a Harriet Tubman musical by white producers – and a lot of the time it’s both very funny but also rather telling about the overall lack of confidence by certain white liberals in just letting black artists tell the stories they want to tell. She also doesn’t put all the blame on the controlling elite, for she calls out the willingness of coloured artists such as herself to compromise their vision for the sake of a wider appeal, which only appears to be a part of the problem rather than a concrete solution for all parties. Blank gets real when it comes to the fickle and in some ways segregated nature of the industry – which is more interested in black stories if they in some way depict a rougher, grimier vision of the streets – but she also finds increasingly heartfelt ways to celebrate the power of having a creative voice can achieve, especially for a performer or creator of colour.

Blank’s creative voice of her choosing is rap, something that she herself clearly finds great joy in – end credits footage sees her onstage performing to a crowd – and again uses both humour and pathos to endow her character’s inner wordsmith with an ability to spit some hard truths while also having plenty of fun with it. Tracks with titles like “Poverty Porn” and “WMWBWB” (wait till you hear what it stands for) are performed with passion by Blank herself, who also turns in a compelling lead performance that’s funny and dramatic simultaneously, whether she’s expressing sorrow over her recently-passed mother or trying to keep the peace when her class erupts into a fight. All the while, Blank keeps the consistency going with a formidable and stylistic tone, complete with frequent cutaways to seemingly improvised vox pops with people on the street, and imagined scenarios and pictures shown entirely in colour, making it easy to see why Blank received a Directing award following its debut at this year’s Sundance.

The film is a highly engaging sit, with plenty of humour to keep the audience amused and a wholesome story about the artistic progress that does not hold back in its oddly accurate satire. It also announces a solid, upbeat voice in the form of Blank herself, who can do both comedy and drama very well while also writing and spitting lyrics which really do leave a mark. She’s a natural, as is the movie which will likely never show its age.

The Forty-Year-Old Version is a funny, smart and ultimately wholesome look at the creative process for black artists, primarily from the perspective of director/writer/star Radha Blank who announces herself as a formidable voice in all her fields.