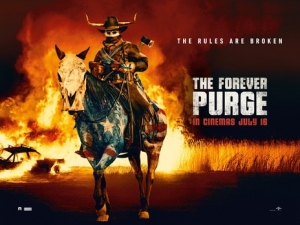 BASICALLY…: A group of lawless individuals attempt to make the annual 12-hour event known as the Purge last forever…

Once upon a time, The Purge was simply an average home-invasion movie that just happened to have a killer excuse as to why nobody could call the authorities. Now, five movies (including a prequel), two seasons of a short-lived television series, and one Rick and Morty parody episode later, the fictional 12-hour crime free-for-all has wiggled its way so deep into pop culture that one mention of it will make people instantly know what they’re referring to. There can be plenty of reasons as to why this is so, from the premise perhaps resonating with people as a harsh commentary on modern American values, to the fact that audiences just want to see people go crazy and raise their blood count over one night. Whatever may explain its strong resonance with people, the series has largely retained its pure entertainment factor, going from one awesomely overblown kill to the next like an exploitation film of the past.

The carnage continues – and supposedly concludes – with The Forever Purge, which raises the level of insanity so high that I’m honestly surprised that this isn’t the one that’s called Anarchy (the title of the second film).

This one takes place after the New Founding Fathers of America have resumed power and reinstated the Purge – making the events of the third movie, Election Year, somewhat pointless – but our main focus is on a small town in Texas, where Mexican immigrants Juan (Tenoch Huerta) and Adela (Ana de la Reguera) have settled in to their new life in America, with Juan taking a job at a local ranch for a wealthy and mostly nice family, save for prejudiced son Dylan (Josh Lucas). When the time comes for the annual event, both families barricade themselves until the next morning, and it looks like another Purge has come and gone – until a psychotic group of white supremacists known as the Purge Purification Force begin implementing a nationwide Purge that lasts forever, and as the country begins to crumble it’s down to our main characters to find a way to escape before succumbing to the absolute non-stop carnage going on around them.

Since it is billed as the final movie in this series – although something tells me that we’ll still see plenty more stories in this universe for years to come – The Forever Purge makes the most of its apparent finale status with perhaps the most bombastic and largest-scale action yet, all within the confides of its series-high budget of $18 million (and trust me, they use every spare penny). This is virtually a war movie, with the streets flooded with gunfire and explosions while people on both sides engage with tanks and other heavy artillery, while the camera engages in long one-shot takes focused on our heroes like it’s Children of Men or Saving Private Ryan. Director Everardo Gout and long-standing series writer James DeMonaco push things all but over the line into post-apocalyptic territory with this film (the third act especially has echoes of an early Mad Max film), and they have a good enough grasp on the situation to still make it digestible and entertaining for the audience, which like a Fast & Furious movie is all you really want out of this series, no matter how extreme and over-the-top it can get.

Of course, this being a Purge movie, “subtlety” isn’t a word that exists in its dictionary. Every single one of these films has had very obvious political themes, so the fact that The Forever Purge continues that trend isn’t really a criticism but more of an understanding of how it operates. However, that doesn’t mean that it’s difficult to spot what kind of themes it’s leaning towards, and since this one revolves around immigration, there’s plenty of real-life parallels you can easily draw to the unfortunate hostility surrounding that topic, especially over the last five years of American politics (at one point, white supremacist characters refer to Mexicans as “bad hombres”). The character arcs in this movie also seem fairly obvious, but like just about everything else they are executed well enough for them to work within the overall context; Josh Lucas’s Dylan character has a major arc going from this jealous bigot to, of course, learning to respect his Latino counterparts because they, unlike him, know how to survive in dangerous situations like this. It helps that most of the characters in this movie are likeable enough to make you want to root for them, and they get some cool moments where they just unload bullets into raving Purgers like they’re nothing.

What this series has been rather good at doing thus far is taking its wholly fantastical premise as seriously as it can take itself, while still giving audiences the dumb-but-fun entertainment value they want out of a set-up like this. With the exception of the first film – which remains the weakest, despite launching this entire franchise in the first place – these Purge movies find new and interesting ways to expand on this concept, whether it’s showing the results of its initial trial phase or setting it during an all-important election year, which always repurposes the basic idea without it becoming dull or uninteresting. In the case of The Forever Purge, it stretches the concept far beyond its own limitations, often to rousing and decisively bombastic effect, which makes me both concerned and also curious to see how, even if, they can raise the bar even higher. The Fast & Furious series eventually went to space, so is it out of the question to see the Purge series also go beyond the stars, in terms of what it can do with its wild concept (although, as silly as it would be, a Purge movie set aboard a space shuttle would be kind of amazing)? Maybe the American tradition could spread worldwide, creating a destructive society that, given many countries’ current leaning toward right-wing policies, could have even more devastating consequences than if it stayed Stateside.

Whatever they end up doing for the next one – and again, don’t believe people who say that this is the last Purge movie, because it most certainly is not – the fact that we’re already imagining where the concept could go next is proof that this series has done its job: it’s taken a fantastical idea and given it real horsepower as a functioning and endlessly fascinating piece of popular culture.

The Forever Purge takes the series to its most bombastic and anarchic levels yet, while still retaining its entertainment factor despite its extremities and distinct lack of subtlety.

The Forever Purge will be released in UK cinemas on Friday 16th July 2021 – click here to find a screening near you!