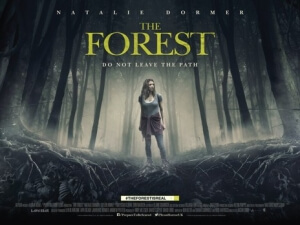 BASICALLY…: Sara (Dormer) travels to Japan to find her missing twin sister Jess (also Dormer), but finds something more sinister when she enters the Aokigahara Forest during her search…

It’s a well-regarded fact that any horror movie that is released in the first couple of months in any given year, as opposed to, say, around October time when it’s closer to Halloween, is usually expected to suck. Of course, there have been exceptions in the past (It Follows, for instance), but mostly they tend to fit well within the variety we’d expect from dumping ground season, when studios quietly release underwhelming projects with little fanfare and watch it die a slow death at the box office.

The Forest, the debut feature from filmmaker Jason Zada, is unfortunately just another example of that trend, sacrificing a promising set-up for the standard jump-scare mentality we’ve seen time and time again.

Such a set-up in this context includes the mythos surrounding the Aokigahara Forest, a blanket of woodland located by the base of Mount Fuji in Japan, notorious for being a quiet and secluded place where the suicidal head to kill themselves. Truth be told, there is definitely material for a truly chilling horror film in there somewhere, and with the right script, director and cinematographer, this could have been an effective and atmospheric mood piece where the scares would come from the pure isolation and scent of death from all corners.

Needless to say, this doesn’t end up happening with this film. The plot sees American woman Sara (Natalie Dormer) head to the forest to search for her twin sister Jess (also Dormer), who has gone missing; but instead of the sense of isolation getting to her, it’s actually ghosts. Yeah, bet you didn’t know that living and breathing demonic hell-spawn were actually the cause of people going mad and suddenly suicidal in these woods, not that silly excuse of interior depression and loneliness that nobody could POSSIBLY take seriously in a film like this. But nope, it’s all the work of creepy ghosts that either look like demented Japanese schoolgirls or the hanging corpses of people we’re guessing weren’t strong enough to fight these literal demons, who want nothing more than to jump out at you as loud music blares from the soundtrack instead of, y’know, mentally scar you with dark memories and give you more reason to off yourself.

Yeah, it’s that kind of horror film, folks; one that thinks it can get by on outrageously silly supernatural elements and irritating jump-scares alone, instead of developing mood, atmosphere and characters to create more suspense and feelings of dread and despair. At a time where the genre is going through a mini-Renaissance with films like The Babadook, It Follows and The Gift, a film like The Forest feels somewhat redundant in its increasingly outdated approach to horror, especially as it uses the kinds of scares that we’ve not only seen many times before, but done much better and more intelligently in the past. This is a film that actually uses the “ghost face” effect we’ve been subjected to in many a YouTube video or Snapchat filter as one of its many attempts to frighten the audience, and after it’s been used in those capacity it’s almost impossible to take it seriously anymore.

You get the feeling that this was a script that was not only passed around from person to person in an effort to make it more conventional a horror film than was probably originally set out to be – no fewer than three writers are credited – but also left somewhat unfinished, with the film’s unsatisfactory closing point feeling more like a break into the third act instead of the actual ending. Zada, as a first-time director after helming a few short films, suffers from the usual first-timer tropes of not steering the film in the right direction and instead making it as safe and predictable a horror film as you can imagine; meanwhile, the actors are definitely trying their hardest to make their material work on-screen – Dormer still gives a fairly strong performance here, although her talents as a leading actress would probably be put to better use in a much more sufficient film than this – even when their efforts threaten to be blindsided by the film’s overwhelming thoughts and contrivances.

So, yeah, The Forest is pretty much as standard a bad early-year horror film as you can get. But hey, at least it’s not Grimsby.

The Forest takes no advantage of its intriguing set-up, instead relying way too much on silly plot contrivances and lame jump-scares that make itself look fairly redundant next to the much better horror films of late.