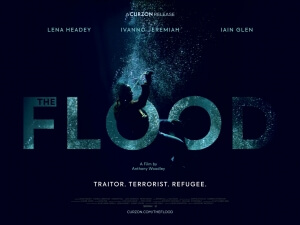 Just like with the Syrian conflict as depicted in For Sama, the refugee crisis is a real-world issue we can’t afford to ignore. Every day, there are hundreds if not thousands of people that have been exiled from their home countries due to war, persecution, or a mere lack of fundamental supplies trying to cross the border in order to obtain better lives, yet the current political climate – and especially the impending Brexit deadline – is making it exceptionally hard for them to even get close. It’s a touchy subject, but it’s one that absolutely worth talking about, or better yet doing something about (even if it’s donating money to helping refugees, which you can do by visiting the links at the bottom of this review), and movies like The Flood are vital to bringing that conversation into the foreground, since they get a lot more exposure than most other things designed to raise awareness.

However, while the intentions of The Flood are absolutely viable, the movie itself is disappointingly clunky and not quite as ambitious as it perhaps thinks it is.

The movie starts when Haile (Ivanno Jeremiah), a refugee originally from Eritrea, is arrested after assaulting a police officer when he is found in a British lorry that’s just crossed the border. He faces criminal charges and, even worse, deportation back to his home country, and he is brought before hard-boiled and cynical immigration officer Wendy (Lena Headey), whose job it is to determine a person’s eligibility to claim asylum. Structured around said interview, Haile relays his story to Wendy; originally a soldier for the Eritrean army, he is exiled after refusing to obey an order, and hastily travels into Europe towards the infamous Calais Jungle, where he scrounges for whatever deal he can make that can obtain him passage into the UK. Meanwhile, Wendy is going through some personal set-backs, including a rather acrimonious divorce, and as she hears more of Haile’s story she starts to become increasingly sympathetic, for perhaps the first time in her iron-fisted career.

Opening text claims that this story is based on many true ones, all amalgamated from several experiences by refugees with the same exact goal as Haile here, and presumably acquired when Anthony Woodley, Helen Kingston and Luke Healy – the film’s director, writer and producer respectively – actually volunteered at the Calais Jungle. Despite the weight that comes with this subject, as well as the many stories that the creative team heard during their time with migrants, the film is surprisingly light on true drama, as you don’t know a whole lot about these characters to care about what happens to them, nor do you ever get the feeling that what they’re trying to do is the only option available to them. Take Haile, for example; throughout, he says that he wants nothing more than to live in the UK – but why? What makes him think that a life in the UK will be a much less complicated one than anywhere else in the world? We don’t really get to know a whole lot about this guy, despite him being the central focus of the movie, so it’s tricky to decipher what his reasons are for choosing this as his ultimate goal, and so the lack of understanding means we are less likely as an audience to empathise with him and his mission. On the opposite end, you have Lena Headey – who, to her credit, does great as always, even if the material isn’t always up to her standards – who this film likes to spend more time with than the actual refugee in this refugee crisis drama, yet her character and the emotional arc that she is given feels neither believable nor fully defined, because the writing isn’t strong enough for the audience to get behind some of the sudden changes she goes through, which feel forced more than they do earned.

A lot of the drama falls flat, including when it should really leave far more of an impact; a crucial early scene that sees Haile on a crowded lifeboat that’s slowly sinking in the middle of the ocean, which should be an emotional highpoint of the story, is all but glossed over through quick and unsubtle editing that it barely leaves a mark on your memory. Another sub-plot that sees Haile befriend critically ill Pakistani refugee Faz (Peter Singh) and his heavily pregnant wife Reema (current Doctor Who companion Mandip Gill) also doesn’t hit the mark, as it mainly feels like it’s there to inject some forced melodrama into an already dire situation, and again you don’t know a whole lot about them to really care all that much. The way it ends seems to be deliberately open-ended, but it feels like there’s a whole chunk of material that’s missing which the filmmakers either couldn’t afford to film, or just didn’t think about setting up a proper resolution to this story which really kind of needs one.

It’s a shame that this movie didn’t turn out as well as it should have, because while the acting is strong and the filmmakers have some level of understanding about what they’re talking about, it’s not executed in a strong enough way to really make the audience feel like they’ve been on just as emotional a journey as the central character. A disappointing mix of contrived melodrama and undefined characters, this movie’s biggest achievement is that it at least is getting people to talk more about a crisis that can’t be overlooked – it’s just sad that the movie’s not better as a whole for it to truly be a conversation starter.

The Flood disappointingly isn’t able to mine as much drama out of the refugee crisis as it thinks it does, with contrived melodrama and undefined characters bombarded into a script that can’t find a way to make a reasonably strong topic interesting for the audience to talk about afterwards.

If you would like to help refugees who, like the main character in this film, are desperate for a new life, then feel free to donate to one or more of the following charities:

A donation can help change a person’s life – please consider making one today.

Want to decide what the movie’s like for yourself?
Check out The Flood showtimes in London
via