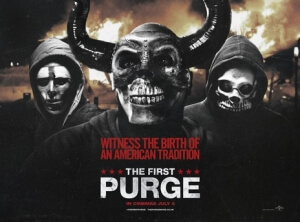 BASICALLY…: The New Founding Fathers of America test a sociological experiment that sees all crime be made legal for one night of the year, and the results are far more chaotic than anyone expected…

The last time a Purge movie came out, it was right in the middle of an intense election year where hatred and common decency were butting heads with one another, in a forceful game of ethics and morality that only the world of fiction – in this case, one where all crime is made legal for one night of the year – could provide us an extremely bloody escape from.

Unfortunately, we all know what won out in the end, and now the Purge series has reached a point where reality has surpassed it in terms of dangerous ideology and corrupt political overtones. The franchise’s first prequel, The First Purge, comes at a time where politics in the real world are suggesting that we are indeed heading down a dark path that could very well lead to something very similar to the Purge, if not the Purge exactly, so the entertainment factor is kind of lost now because we are all aware of how something like that could very well exist in this crazy day and age.

Nonetheless, it’s still a Purge movie, and real-world political overtones aside, it still manages to give audiences exactly what they are expecting from one of these films; a cruel, ultra-violent ride that soaks in our inner bloodlust and makes the gore seem rather intriguing, against our better judgement.

The First Purge takes place during exactly that; the very first instance of all crime being made legal for twelve straight hours, in an attempt by newly-implemented governing party The New Founding Fathers of America to reduce crime, economic woes, and civil unrest. The poverty-stricken and predominantly African-American province of Staten Island, New York, has been chosen as the primary base where the experiment will be tested out,  with citizens either being advised to stay indoors for a $5000 compensation when the sirens announce its commencement, or sign up to purge in return for an even greater pay-out. When the night begins, and people all over the area begin purging by committing petty crimes and in some cases even killing other people – all under the watchful eye of Dr. May Updale (Marisa Tomei), the woman considered to be the architect behind the idea of the Purge – it doesn’t take long for things to get out of control, and several people caught up in the crossfire, including local drug kingpin Dmitri (Y’Lan Noel), siblings Nya (Lex Scott Davis) and Isaiah (Joivan Wade), and plenty of other characters too numerous to mention, all must try and survive what will turn out to be the first of many long nights once a year.

None of these movies have been especially great at subtlety, with some of them becoming so overblown and sometimes pretentious (particularly the first one, which remains the weakest Purge movie) that they may as well be smacking you in the face with a brick plastered with its social commentary. This one is no different, in particular how it addresses the sharp racial divide with rich white people of power unleashing hell amongst a group of neighbouring minorities, the point being driven home so hard it’s hitting you at every turn. Again, this current political climate which seems so set against any race or ethnicity that isn’t the one in power makes this a particularly unsettling Purge movie to watch, because you can just barely see something like this coming to life with all these hateful people in charge, and it makes you feel more uncomfortable than before when you see all these crazed hooligans – again, most of them white and even dressed in full Klansman robes – pouring bullets into the oppressed minorities like water into a glass. It feels like a movie made entirely in response to the growing rise in nationalism, especially with US politics, and tries its hardest to show a mirror image of how things could genuinely be if the world doesn’t sort itself out anytime soon, although the message – as anti-hatred though it may seem – is so blunt and obvious that you’re shouting “we get it!” to the screen about fifteen minutes in.

However, at its heart it is still an action-horror movie with plenty of guns, blood splatters, knives, machetes, and even exploding teddy bears to satisfy any audience wanting a darkly fun time out of these movies. Although this movie lacks Frank Grillo – the de facto lead in the two previous Purge movies – it gives us a new action hero in the form of Y’Lan Noel, an unknown actor up until now who is first introduced here as someone who you think is going to be the main bad guy – after all, he’s a criminal drug lord with a penchant for violence – but that stereotype is quickly diminished when we see that he is someone with a conscience, revealed through his troubled relationship with other main character Nya, and he ends up becoming an unlikely action hero of the Bruce Willis type (seriously, bloodied vest and everything) who’s easy enough to root for in the midst of all this carnage going on around him. For the most part, he is genuinely selling his big action moments, and it helps that the fight choreography is shot in a way that you can actually tell what’s happening, nor does it shy away from some of the gorier sides of the fight either. I hope this film paves the way for Noel to get more prominent roles in action films, because I thought he pulled it off well here.

By now, you probably know what you’re getting into with these Purge movies, and you’ve probably already sussed whether this is the kind of movie you want to see in a cinema or not. Either way, it’s another gory and darkly thrilling ride to go alongside all the rest of the mayhem.

The First Purge offers more of the same bloody and largely unsubtle carnage you’ve come to expect, although the current political climate makes this a less digestible entry to watch than the others.