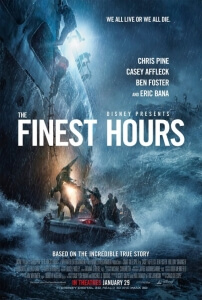 BASICALLY…: An oil tanker is devastated in the middle of the ocean, and the Coast Guard enlists  Bernard “Bernie” Webber (Pine) to man a rescue boat and save the survivors before they drown…

For some reason, this month has seen a succession of films that have been utterly joyless, lacking a spark of life and energy, and being exceptionally dull and boring as a result. Films like Dad’s Army, Point Break, Jem and the Holograms and Concussion all sadly match those qualities, emphasising more that the first couple of months in a year – often referred to as a “dumping ground” for studios to quietly open their rubbish movies and, in the UK’s case, awards contenders that didn’t find room to open last year.

But by far, the absolute worst one out of all of them… is still Point Break, but in terms of blandness then The Finest Hours is not that far behind.

There are moments in this film, which documents the Coast Guard’s brave rescue of 32 men from a sinking oil tanker just off the Chatham, Massachusetts coast in the early 1950s, where you have to wonder if director Craig Gillespie (responsible for much better films like Million Dollar Arm and Lars and the Real Girl) actually acted as a front for M. Night Shyamalan, because it seems to have all his tropes – stilted acting, wooden dialogue, direction that thinks it’s far more important than it actually is – and all that’s missing is his name on the credits. Almost everything from the writing to the visual effects feels completely off, and it’s all spearheaded by a filmmaker who’s usually fairly reliable but for whatever reason seems as un-invested in telling this particular story as everyone else seems to be.

To be fair, though, maybe it’s just Gillespie’s physical response to a wafer-thin script that skips the emotional investment just so it can give us the straight facts, which aren’t even that interesting to begin with. There is absolutely no reason to care about ANYTHING in this movie, and this is one where it’s established that the lives of at least 30 men are in danger of drowning in the middle of the ocean. It all boils down to the film’s failure to give any of its characters enough of an emotional arc to make us really root for them to make it out okay, nor even who or what their actual personalities are, outside of traditional stock traits like a hard-ass who treats the hero like crap but respects him by the end, the jovial one who lightens people’s spirits in time of crisis (by singing, of all things, “Sit Down, You’re Rockin’ The Boat” from Guys and Dolls), and not one but TWO instances of the personality-free main character who exists only to save the day and nothing else. It wouldn’t be unfair to say that out of all the characters in this movie, it’s Graham McTavish’s beard that has the most personality and rounded character arc out of the bunch.

It’s weird, because it also features in the lead roles Chris Pine and Casey Affleck, two actors who are usually very charismatic and good in these type of roles, yet both of them – Pine especially – seem to be actively going the distance in order to make their already-bland characters even more limp and lifeless. Pine perhaps plays the most pathetic and uninteresting lead character that distributor Disney has put out in a long while, and that’s saying a lot about the studio that recently made a way more passive version of Cinderella; his portrayal of Coast Guard Bernie Webber as a timid, socially shy wet blanket, who for some reason whispers the majority of his lines even when they’re meant to be delivered in moments of triumph and valour, is frankly astonishing in how half-assed it feels. To bring up the Shyamalan comparisons again, it reminds one of Mark Wahlberg’s infamously tone-deaf turn in The Happening, one that – much like with this movie – took away everything that was great about the actor and instead presented him as a robotic and stiff impersonation. What’s more, he never changes as most character arcs are wont to do, and stays his exact boring self all the way through the film without any major breakthroughs in developing his personality, even when the film takes away precious time to focus on an extremely vanilla romance between Pine and Holliday Grainger, which is more painful to watch when you suddenly realise that their chemistry is about as engaging as the pairing of an ice bucket and a tennis ball. Affleck, as the captain of the sinking oil tanker, fares slightly better, but even he can’t get past how his character has almost nothing to warrant an emotional reaction from the audience.

Gillespie also shows his overwhelming un-enthusiasm in the project with a slow and messy pace that sucks away all developing interest you may be getting – slap-bang in the middle of the climactic rescue at sea amidst a terrible storm, it suddenly cuts to a mini sub-plot of a broken-down car back on land – and visual effects that hardly disguise the fact that it all seems to have been shot exclusively on a green-screen, not to mention waves that look like a cut-scene from a PS4 game which also comes with the glitches one might expect to find (at one point, the small Coast Guard lifeboat is forced completely underwater before re-emerging on to the surface, yet everyone looks and acts like they’ve been hit by a few splashes of drizzled rain).

Whether or not Shyamalan had anything to do with the making of The Finest Hours, his now-infamous hokeyness is felt all over this bland and forgettable mess, unintentionally or not.

The Finest Hours is a completely bland and lifeless disaster movie that nobody even feels like they wanted to make, which is shown in Craig Gillespie’s hokey direction and charismatic actors like Chris Pine making an active effort to match their wafer-thin and boring characters with their stiff and stoic performances.