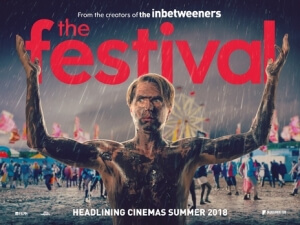 BASICALLY…: After suffering a nervous breakdown, graduate Nick (Thomas) is dragged along by his best friend Shane (Animashaun) to a three-day music festival…

I have a theory as to how The Festival came about: a couple of guys at university together bonded over their shared love for The Inbetweeners, so much so that one day they decided to write their own fan-script that focused on the character of Simon, the neurotic and hopeless romantic of the main quartet, who in their story had somehow distanced himself from the others in the group, gone on to make his own friends at university, and got roped into attending a music festival where he would naturally get himself into awkward situations as he did on the show. Their finished script then somehow found itself in the hands of Inbetweeners co-creator Iain Morris, who decided that this was the script he wanted to turn into his solo directorial debut, even roping in Simon actor Joe Thomas to play the lead, despite the fact that he was basically adapting fan-fiction of the show he helped create.

Obviously, none of this is true (I hope), but that’s kind of what The Festival feels like; an Inbetweeners clone written by fans who can’t even replicate the strong and awkward humour that the show and its own feature spin-offs perfected, and no matter how hard it tries it just doesn’t raise enough chuckles to even be considered a worthwhile knock-off.

Joe Thomas plays the central character Nick – though I don’t really know why they gave this character a different name, because the character basically is Simon, albeit under different writers (and trust me, we’ll get to this character shortly) – who is dumped by his girlfriend Caitlin (Hannah Tointon, Thomas’ real-life partner) just as they are about to graduate from university. In an effort to get Nick out his depression, best friend Shane (Hammed Animashaun) lures him out to the massive, unnamed (though filmed last year at Leeds) outdoor music festival for the long weekend, where they almost immediately get into one mishap after another, as you would expect from your average Inbetweeners episode.

I know that’s like the fourth direct reference to The Inbetweeners (and now fifth) I’ve made so far in this review, but the comparisons are just too great to ignore, especially seeing how it’s not only got Iain Morris and Joe Thomas on board as director and lead respectively, but it’s also been marketed in almost the exact same way as either of the two movie adaptaions were, right down to using similar title font on the poster. It’s really hard, therefore, to see The Festival as anything other than a blatant attempt to copy the style and humour that made that series popular, especially when on its own it really falls flat in a lot of areas. One of the biggest problems with this film is, for something that clearly wants to fill the gap left by that popular TV and film series, it’s really not all that funny; a lot of the gags go for the same kind of gross-out and shock humour that you’d find in The Inbetweeners, including piss and poop jokes, accidental nudity, sex gags (including an opening money shot, so to speak, that would feel right at home in any American Pie sequel) and people just generally being awkward and borderline unsociable, which work fine under the writing duo of Morris and co-creator Damon Beesley who were smart enough to balance it out with genuine wit and believable embarrassment, but under different writers clearly inspired by Morris and Beesley’s work, there are times when it feels like a straightforward copy more than its own thing. That’s not to say that it’s entirely laugh-free, as there were a couple of times where I did chuckle a little (many of them courtesy of Jemaine Clement, who shows up as the affectionate step-father of Animashaun’s character) and did find that there were ideas which, with cleverer writing, could have actually been something much more uproarious than it is.

The other major problem I had with this obvious Inbetweeners clone was, funnily enough, the inclusion of one of the actual Inbetweeners. Joe Thomas is a fine actor, but his character on the show was always the weakest in the group, the neurotic and hopeless romantic whose moments of teenage angst and gullible awkwardness were usually the butt of many jokes in both the series and films, and he was usually more frustrating to be around than endearing; now, when you have him play someone who is basically the same character in all but name, you’re going to end up with a pretty intolerable lead, and that’s sadly who Thomas is saddled with here. Nick is an incredibly frustrating character to lead a film like this, as he’s a self-absorbed, rude and inconsiderate wet blanket who’s too uptight and snotty to care about, and you really do side with a number of people who consider him to be an annoying waste of space, in moments where they are clearly written to be the villains. As the film goes on, you find yourself caring much more about Shane, played by largely unknown actor Hammed Animashaun who’s a far more likeable presence and is playing a character who you can more easily root for, especially when he’s sharing some nice chemistry with Amy (Claudia O’Doherty), an Aussie and festival enthusiast who befriends the boys on their trip. Unfortunately, it’s Joe Thomas’s character who’s the designated lead, and again while he is a fine actor, he’s playing the sort of character who will far more get on your nerves than actually form some core connection to, especially since we’re being asked to follow his story throughout the entire movie.

As for how accurate this movie is to real-life music festivals, I couldn’t tell you; but if they’re anything like The Festival, then it’s no wonder so many people do drugs just to get through the drudge of it all.

The Festival is an obvious carbon copy of The Inbetweeners, only without much of the wit and humour that made the series and its film spin-offs popular, and with an unlikeable lead character who’s too stuck-up and self-centred to really care about.