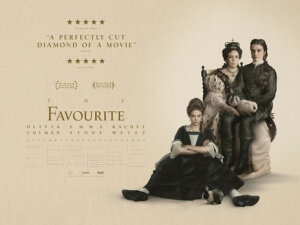 BASICALLY…: The favour of Queen Anne (Colman) is fought over by her loyal confidant Sarah Churchill (Weisz) and newcomer Abigail (Stone)…

Yorgos Lanthimos’ third English-language film The Favourite had a long journey to the big screen; writer Deborah Davis first wrote a draft of the script over twenty years ago, but although it attracted the enthusiasm of producer Ceci Dempsey – who remained a producer on this film all the way through production – the script failed to secure financing from studios who were, at the time, afraid that a mostly female cast would be difficult to market. It took nearly a decade for the script to once again be uncovered by producer Ed Guiney, and a few years later it was finally a done deal with Yorgos Lanthimos signing on to direct as well as the leading acting trio of Olivia Colman, Emma Stone and Rachel Weisz (the latter being a replacement for original actress Kate Winslet), not to mention writer Tony McNamara being hired by Lanthimos to freshen up Davis’ long-gestating script.

As you may have read in my previous review for this film, it was time well spent as The Favourite is an uproarious satirical film drenched in historical drama, with a fantastically tuned script filled with sharp witticisms and harsh put-downs, and three outstanding central performances which are career high points for at least one of them. However, as the film’s history clearly shows, it takes great patience and undying faith to get a film like this made in the first place, which makes me respect it a hell of a lot more that it didn’t turn out to be just another costume drama primed for awards success.

The plot, just to recap from last time, is set almost entirely in the court of Queen Anne (Colman), a gout-suffering monarch who spends most of her time wandering aimlessly about like a toddler in the midst of a temper tantrum. Most of her commitments are fulfilled by Sarah Churchill (Weisz), her closest confidant and secret lover, whose power and closeness to the Queen is tested when Sarah’s cousin Abigail (Stone) shows up looking for employment. Driven by her own desire to become a lady once more, after her wealthy father lost everything to gambling, Abigail soon starts making her way into the Queen’s good graces and into direct competition against Sarah, leading to a catty power struggle with both women making each other’s lives hell in order to become the Queen’s court favourite.

I mentioned last time that this film feels like an episode of Dynasty if it took place in the same continuity as Stanley Kubrick’s Barry Lyndon – it even shares similar avant-garde cinematography, here provided by Robbie Ryan who uses fish-eye lenses to effective if off-putting use –  but upon second viewing, the film feels much more separate from that. Lanthimos is a director who always seems to take the most unconventional paths to tell a certain story, and here he gives the classic costume drama a helping of dry wit and a blunt delivery that you don’t often find in this genre of film. It’s rare to see a film where the Queen of England is involved in not one but two passionate love-making scenes with two other women, especially one where the monarch herself openly admits that she enjoys having a woman’s tongue inside of her, but the fact that Lanthimos makes it feel so matter-of-fact via his direction is a testament to how funny and sharp the script can be, because with some of these one-liners that the characters trade with one another there really wasn’t any other way they could be delivered whilst getting their scathing point across. It’s a costume drama that takes a few more liberties than some of the more standard ones out there, with a catty manner about it that makes it a lot more enjoyable than your standard slice of cinematic royal history.

Again, it’s a very good thing that Lanthimos didn’t also write the screenplay, because I feel he is a far more effective director than he is a writer; both of his previous English-language ventures The Lobster and The Killing of a Sacred Deer, although stunningly made, tended to falter with a script that Lanthimos would co-write which would go a little too hard with the dryness and bizarre overtones, a problem that never seems to arise with Davis and McNamara’s script for this film. Instead, the director can just focus on getting the best visual style possible for this film as well as some great performances out of his cast, including three outstanding turns from the lead actresses who have never been more delightful to watch in a film. However, while Weisz and Stone turn in two excellent performances as the women trading reserved threats with each other, with one certainly having more nefarious goals than the other, in the end it’s the one with the crown that rules all; Colman gives an exceptional turn as the troubled Queen Anne, a woman who we can certainly laugh at due to her many insecurities and child-like mannerisms, but also sympathise with as we learn a little more about her tragic history (she keeps seventeen rabbits in her chambers, all of which symbolise the children she has lost over the years). She has been such a strong actress for years in British film and television, and it wouldn’t surprise me if she started getting much bigger roles in international productions based solely on her film-stealing turn in this movie, especially when it looks increasingly more likely that she’ll be up for her very first Oscar in the coming months.

The movie makes very good use of its limited locations, a provocative cinematographer, and of course an incredibly witty and intelligent script that this director and these actresses can really sink their teeth into; but really, the biggest compliment that one can give a film like this is that, after all the years it took to get this script into production and to then have it go on to become an actual favourite in this year’s awards race, this is a film which deserves a great deal of favouritism by anyone fortunate to go and see it.

The Favourite is a stand-out historical drama that sees director Yorgos Lanthimos and a fantastic leading trio of actresses including an outstanding Olivia Colman really sink their teeth into an entertainingly witty and intelligent script that sets itself apart from other royal costume flicks.