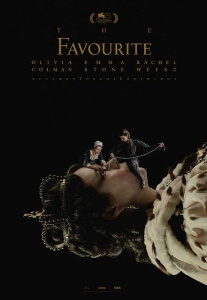 BASICALLY…: The relationship between Queen Anne (Colman) and Sarah Churchill (Weisz) is threatened by the sudden arrival of Sarah’s cousin Abigail (Stone)…

This review is of the cut shown at the BFI London Film Festival in October 2018 – the UK release date is currently listed for January 1st 2019.

I’m starting to get the impression that director Yorgos Lanthimos fancies himself as the next Stanley Kubrick – a noble ambition, given that the legendary filmmaker behind 2001: A Space Odyssey, The Shining and A Clockwork Orange amongst many others had a particular style that others have seldom tried to replicate but come up short next to his unique way of presenting his own brand of stories, but so far (at least, in terms of the films of his I’ve actually seen) his road to becoming Kubrick’s natural successor has been a bit divisive to say the least. The Lobster, which critics and some awards groups fell head over heels for, was certainly ambitious but way too weird and out-there for my personal tastes; meanwhile, The Killing of a Sacred Deer was a film I was fascinated with way more with and certainly had kinder things to say about it, although it did not meet anywhere near as major critical acclaim as the Greek director’s previous English-language film did (though reviews were still kind, up to a point).

After a little while of my opinions and that of the critical consensus failing to align with his work, he has debuted The Favourite which has already won over critics and audiences alike, as well as push its Oscar chances through the roof, but more significantly I can say that out of the films of his that I have seen, this is by far and away the best one; you could even say that this one is… the favourite (wait, please come back!).

Taking place in the court of Queen Anne (Olivia Colman) during the early 18th century, during which time Britain is engaged in a war with France, the royal is far less concerned with governing her country, and more so with just bumming around eating, attending dances, and tending to her many rabbits. Official duties are handled by the Queen’s trusted friend and advisor Sarah, Duchess of Marlborough (Rachel Weisz), whilst Anne mainly sits and acts like a spoiled and petulant child. Sarah is considered to be a powerful figure due to her position, to a point where she’s actively influencing her royal friend to double the price of taxes to help pay for the ongoing war; but her position is threatened when Sarah’s cousin Abigail (Emma Stone) arrives on the palace’s doorstep, covered in mud and possibly faecal matter. Abigail comes from a wealthy family ruined by her father’s gambling habits, and in her desire to once again become a respectable lady acquires a job as a maid for Anne, slowly but surely winning the Queen’s affections and sparking a bitter, catty power struggle between Sarah and Abigail.

All the ingredients for a polished and bronzed Oscar-bait movie are there; the historical setting, extravagant costumes, a member of the royal family played by a beloved actress, and a female-centric storyline that resonates well in today’s post-#MeToo timeline. But if you have seen any of Yorgos Lanthimos’ previous films, especially his last two, then you will know that what you are bound to get with The Favourite is anything but a typical Oscar contender. It’s filled with provocative cinematography that makes heavy use of wide-angle lens camerawork to add an off-putting and other-worldly vibe to it, some extremely catty dialogue that would make Jane Austen blush, and the occasional dash of pitch-black comedy delivered with such dry matter-of-factness that you’d swear that this is something straight out of a Wes Anderson movie half the time.

I enjoyed this film greatly for those reasons, and especially when I placed myself under the pretension that this is as though Stanley Kubrick directed an episode of Dynasty and for some reason set it in the same continuity as Barry Lyndon, as it was a good bit of fun watching these women play for the same position of power and resort to the most animalistic of ways in order to come out on top, sometimes in a physical and even Biblical sense. Also, these are three fantastic actresses who are each revelling in their very different but similarly ambitious bitchiness, with Stone and Weisz excelling as two sides of this very strange love triangle, while Colman is utterly brilliant as the petulant prize both are fighting for, and their combined enthusiasm and ability to deliver the witty dialogue provided to them is awe-inspiring to watch. I think it also helps greatly that Lanthimos didn’t contribute to the screenplay, a first for one of his movies, with writing duo Deborah Davis and Tony McNamara instead providing the words while Lanthimos is tasked with executing it with his trademark dry wit. I found that this was actually rather healthy, because as much as I liked The Killing of a Sacred Deer and tolerated The Lobster, I did find that whenever he would write something it would usually be a bit overindulgent and blunt to a fault, as seen in both those films.

I never got that out of The Favourite, which is probably why I liked it more than any of his other films I’ve seen to date; it sees Lanthimos actually focusing on his unique directorial style, which he exhibits well here, while letting other writers provide the dry wit I find he usually he tends to struggle with. In that sense, this is a strong film that shows how, as long as he continues to be generous with his scripts, he can make a good and compelling movie if he were to be reeled in.

The Favourite is probably Yorgos Lanthimos’ strongest English-language film to date, largely due to its impressive production values, three great lead performances, and a script that lets other writers come up with the dry with for him.