The Father (Review) – One Of Anthony Hopkin’s Greatest Performances 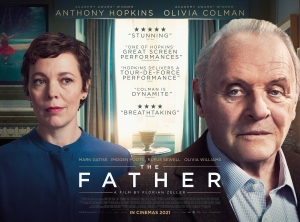 BASICALLY…: An aging man (Hopkins) begins to struggle with his concept of reality…

This review of The Father was conducted as part of the Borderlines Film Festival 2021.

Watching director and co-writer Florian Zeller’s excellent drama The Father was a highly emotional experience for me, as I’m sure it will be for a lot of others. After all, many of us have or have had parents, grandparents, or even very close friends who have succumbed to the devastating effects of old-age dementia, and at least nine time out of ten it’s been an exceptionally difficult sight to watch someone you’ve known your whole life suddenly have no idea what’s going on around them, or even who you may be. I myself have seen my grandfather pass away from Lewy body disease, while my grandmother has been suffering from Alzheimer’s for well over ten years; at some point in the future, one or both of my parents will be in need of care when they start forgetting things, and eventually I may even suffer from it later in life. It’s a cold, cruel fact, but sadly dementia is destined to be a part of our lives in some way, shape or form.

What The Father does so brilliantly, and really unlike many other depictions of dementia in film, is that it places the audience directly in the shoes of someone who is suffering from it, and so we get to see how confusing and discombobulating the world around them can truly be. It makes for some incredibly heart-breaking drama, especially if you have indeed seen the effects of it first-hand on a loved one, which the intelligent script and especially the fantastic acting helps make seem all the more poignant and important.

Zeller’s film, adapted from his own play of the same name, is about Anthony (Anthony Hopkins), an elderly man living in a London flat, where he is clearly exhibiting signs of deteriorating memory loss, but is nonetheless determined to stay where he is. Anthony is regularly looked after by his grown daughter Anne (Olivia Colman), who is struggling to find carers who can tolerate his feisty and cantankerous nature – when the film opens up, yet another one has quit after he accused them of stealing his watch, which was really in the secret box in the bathroom where it always is – and who must face the fact that her father is perhaps so far gone that she cannot care for him anymore. Meanwhile, Anthony is starting to lose his grip on reality, as time rapidly moves from morning to evening, entire conversations are repeated wholesale, and most disturbingly of all people will appear in the flat claiming to be friendly faces, but they appear to be complete strangers.

It may sound like a horror film, and in a way it is; The Father gives us such a vast and eerily plausible look at what it’s like to see the world through the eyes of someone who’s slowly forgetting everything, and it can often be a rather scary thing to witness. As we see through Anthony’s eyes, Anne will walk through the door but instead of it being Olivia Colman, it’s a different actress entirely, and she will interact with other people who we aren’t even entirely sure are real or not, like a strange man played by Mark Gatiss who claims that Anthony is living in his and Anne’s flat instead of the other way around, or even Colman’s Anne herself. Needless to say, he’s confounded by all of this, as are we since Zeller’s direction, as well as his and co-writer Christopher Hampton’s wonderful script, does a stellar job of making everything feel so surreal and other-worldly without going anywhere close to overboard. There’s never a sense that we’re seeing the world as it actually is whenever Anthony is in the scene, but that is exactly why The Father hits so hard (no pun intended), because it is specifically designed for us to understand what this man is going through as his mind is slowly disintegrating, and it manages to do it so well that it makes you think about how other dementia-themed movies like the dreadful Head Full of Honey have done such a poor job of getting across just how frightening and upsetting it can be for everyone, most of all the person themselves.

That person, by the way, is brought to life by what simply has to be one of Anthony Hopkins’ finest-ever performances. In a role that feels like it was tailor-made for the Oscar-winning veteran – Zeller and Hampton even incorporated not just his name, but also the actor’s actual birthday into the character – Hopkins’ Anthony is a complicated but ultimately sympathetic person, who often isn’t afraid to shell out some hurtful insults to defend himself, being the stubborn old man that he is, but just as equally is distraught about his entire life falling apart right in front of him, to a point where nothing seems to make sense anymore. His teary monologue in one of the final scenes is among the most upsetting things I’ve seen so far all year, and it’s a testament to how great an actor he is that you can feel extraordinary empathy for someone who repeatedly objects to a character’s move to Paris because “they can barely speak English”. An equally-excellent Olivia Colman provides us with the film’s moral compass, as someone who must make a definitive choice that is by no means easy, but is perhaps the right one to make in this situation.

It’s also one of the few stage adaptations that you can tell by its mostly singular location was definitely first performed in a theatre, but still manages to feel rather cinematic thanks to some slick editing and grandiose direction by Zeller which makes this spacious-looking London flat feel extremely fitting for a big-screen experience. It’s just another of the many things that make The Father such an outstanding movie, which comes highly recommended by me and just about every other person on the planet who’s been fortunate enough to see this film early (and with its six Oscar nominations, including Best Picture and two very well-deserved nods for Hopkins and Colman).

Be sure to bring tissues with you, especially if you’ve experienced old-age dementia yourself at some point in your life.

The Father is an excellent drama that brilliantly puts you in the confused and discombobulated mindset of someone with dementia, which is smartly executed by director and co-writer Florian Zeller, and fantastically acted by Anthony Hopkins in what has to be one of his greatest performances.

The Father is currently scheduled for a UK cinema release on Friday 11th June 2021.