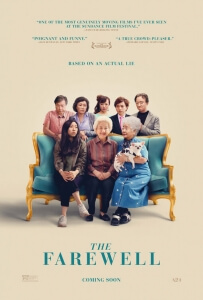 BASICALLY…: Chinese-American Billi (Awkwafina) visits her terminally ill grandmother (Shuzhen), who has no idea that she is dying…

This review is of the cut shown at the Sundance Film Festival London in June 2019 – there currently isn’t a UK release date listed for this film yet, but you can expect a second review whenever it does make it to cinemas over here.

It’s one thing to be a good movie, but it’s an entirely separate thing to also be one that can inspire some meaningful conversations afterwards about its themes, morals and even its ethics. The Farewell, written and directed by Lulu Wang, is one of those films that you watch it and are reasonably impressed by how well it’s written, directed, acted etc, but afterwards you start thinking more and more about the issues it raises about culture, family, self-discovery and even mortality, and as you do you realise that you have a newfound admiration for something that was already pretty good.

I had quite the rollercoaster of a journey through this movie, as you will read about a bit later, but at the end I came off of it being pleasantly intrigued by the ride and what it offered me from an intellectual standpoint, and am curious enough to ride it again in the near future.

“Based on an actual lie,” reads one of the opening titles, and it’s not inaccurate; Wang bases her movie on an actual family incident within her clan, which Wang had previously shared during an episode of radio program This American Life. In the film, young Chinese-American Billi (Awkwafina) learns that her beloved grandmother “Nai Nai” (Zhao Shuzhen) has been diagnosed with terminal cancer – but the thing is, her family has elected to not inform her of the illness, which is a choice that’s surprisingly common in her native culture. However, Billi – having been raised in America for most of her life – finds it to be a perplexing decision, and soon she finds herself heading out to China unannounced to join the rest of her clan to help stage a family wedding (which was their excuse for coming to see the dying matriarch in the first place), where she starts to realise there’s a greater gap between her more traditionalist family and her more open-minded mentality than even she realised.

Setting the movie in China and have it be an all-Asian cast is already a smart move, because if this exact same plot had been used for a traditional English-language film with a mostly white ensemble, it would have been laughed all the way back to the developmental phase; but that in and of itself opens the discussion about culture clashes that this movie raises, because what we – and also Billi, who is our unofficial guide into this odd and even alien part of the world – perceive as absolutely ludicrous and rather hurtful, in somewhere like China it’s a completely normal occurrence.  It’s fascinating to see how this family, the vast majority of whom have barely even stepped foot out of Asia, can have meaningful discussions about the sheer mechanics of these things when, again, to an outsider like Billi it’s anything but normal; as you see her absorb everything about this situation into her head, you can see through her facial expressions how she wants to go along with all of it and become complicit in the lie, but because of the Western beliefs that she has become accustomed to there is always that part of her that’s desperate to call them out on their bollocks. Awkwafina, who until now has mostly shone in comic-relief supporting roles in movies like Ocean’s 8 and Crazy Rich Asians, is by far at her most restrained here, and as such gives perhaps her most nuanced performance to date because she makes her expressions of inner conflict look so effortless to pull off, and she acts as a strong beacon for us to latch onto as we go through this journey with her, and as she encounters one odd family member after another.

It’s a movie that offers plenty in terms of after-screening conversation, including not just its themes of culture clash but also how it depicts the importance of family traditions (an extended scene in a graveyard puts these traditions on full display), how we deal with grief and loss in our own different way, and the significance of learning about and embracing your roots just as Billi does during the film; I feel like I could sit down with a fellow audience member and have a nice long chat about most if not all of the valid points that the movie had raised. Having said that, I didn’t immediately come to this conclusion; for a short while during its first half, I was finding it a little difficult to fully get on board with it because the dialogue and the delivery is so dry that you’re briefly struggling to find an emotional centre to latch on to. It wasn’t until characters started having legitimate conversations about the morality of what they are doing that my interest levels started to tilt in favour of it; I greatly enjoyed listening to their arguments for their beliefs, and I also appreciated that it wasn’t being presented as a black-and-white situation, since there are both advantages and disadvantages to this debate where nobody is right but nobody is wrong either. It’s very smartly written to a point where such a debate feels earned, and you can have a fair understanding of where both sides are coming from without greatly favouring one over the other.

What makes me the most curious, but also the most concerned, is that a film like The Farewell is destined to not score as big a box office draw as something like Crazy Rich Asians, because while it is a much smaller and more independent movie this one feels like it could benefit from an audience of a sizeable capacity who like to feel intellectually challenged and intrigued rather than just entertained for a couple of hours. On the other hand, though, the fact that not as many people are going to check it out kind of frustrates me, because it definitely deserves to be seen by as many people as possible.

The Farewell is an intriguing and smartly executed family drama that contains themes you can think about and have a reasonable conversation with someone about afterwards, while also be satisfied with its slightly dry but wholly intellectual approach to an odd cultural situation.