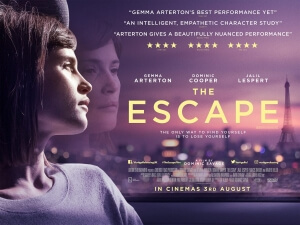 Anyone who is, or has in the past, struggled with depression in any way shape or form will find The Escape an extremely difficult movie to watch. There are scenes and performances in this movie that are so emotionally raw and eerily accurate to how someone with low self-esteem would realistically act, that it can hit home pretty hard for some people, and at worse drudge up some bad memories of when they may have been feeling their lowest.

As someone who has been diagnosed with mild depression, I definitely found aspects of this movie to be extraordinarily upsetting; this movie really captures what it feels like to be totally isolated in a situation and environment that seems perfect, but deep down there is something about it that just drains you of any other sense of life and happiness. I applaud writer-director Dominic Savage for encapsulating these feelings on-screen for the world to recognise, and especially lead actress Gemma Arterton for her pitch-perfect portrayal of someone who fits that mould exactly, as they have seriously understood the emotional pains and tribulations that anyone with depression can go through and made a movie that doesn’t shy away from how bad it can get, no matter how harrowing it appears to be.

Arterton plays Tara, a woman who lives a seemingly perfect existence; a nice house in the suburbs of Kent, an attractive husband (Dominic Cooper) with a cushy job, two young kids, and a couple of cars. But deep down, she is really unhappy with her life – and I mean, REALLY unhappy; she is taken for granted on several occasions by her inconsiderate husband who rarely ever has her best interests at heart (he initiates a morning routine of intercourse, which she tearfully allows), her children are screaming little brats who she barely has any emotional connection towards, and her life is largely spent either doing her supermarket shop, peeling vegetables, and doing nothing substantial for herself. It’s not until a relieving solo trip to London, where she comes across a book of articulate tapestries that capture her imagination, that she finally begins to openly admit her unhappiness with her life, but the lack of genuine support from her husband, who can’t seem to apprehend that his beloved wife is at all dissatisfied with their perfect existence, or even her own mother (Frances Barber in a one-scene cameo) who coldly dismisses her feelings as a “phase” that she’ll grow out of, causes her to make a decision somewhere around the half-way point that sees her take a spontaneous trip alone to Paris, where she seeks to finally find clarity for her seemingly eternal melancholy.

That trip to Paris doesn’t really come into play until much later in the film, and everything leading up to then is an increasingly uncomfortable drama about a woman that’s fallen out of love with everything, including her husband and even her own children. Her dissatisfaction is apparent from the very first frame, and we continue to witness her slow but steady disintegration as she endures one uneventful thing after another; some of it is quite hard to stomach, only because it hits so close to home as someone who has been through similar symptoms of depression, and has also experienced feelings of sudden anger and frustration over the smallest of things, as a coping mechanism to further express how deeply unhappy I was. Further scenes of other characters trying in vain to snap her out of her lull, especially her shit-heel lad of a husband who unconsciously expects his love and joy to be the stereotypical stay-at-home wife and mother at all times, only twist the knife even deeper into the skin, and you really feel this woman’s helplessness in every corner of her mundane experience, forever feeling incarcerated in her own cul-de-sac prison with no apparent free will of her own. Savage’s direction sees his actors adopting a naturalistic approach to the dialogue, which makes the situation feel ever so real and therefore far more relatable to anyone suffering from similar conditions, and the performances by those actors are grounded and humanised in ways that more traditional scripts would have easily nixed; Cooper’s husband character, for example, isn’t necessarily evil, though he does have his intimidating moments, but he is definitely ignorant and unsympathetic when it comes to anyone else other than himself; and Arterton, in a career-best piece of phenomenal acting, plays the lead role in a way that really allows us to side with this character and pray that she gets the boost of confidence and happiness that she so desperately needs.

When the movie does eventually get to Paris, following an inciting incident that is probably the closest to a crowd-pleasing moment in an otherwise bleak and upsetting movie, it’s like a breath of fresh air after being as trapped as she has been for the last hour. For a short while, it more or less turns into a silent film with the dialogue all but nixed as Arterton’s character wanders around the city, checks out some of the artwork, and even bumps into a handsome French man (Jalil Lespert) whom she fancies a bit of a fling with. By that point, you’ve endured so much of this character’s pain that you’re about as ready for a release of energy as she is, and even though there are still a couple of surprises to be found in this section of the film there are just as many life-assuring moments that help put everything into perspective. How the movie wraps itself up may not necessarily be the right or most logical choice, but you’ve gone on such a perilous journey with this character that you don’t really care and just want the turmoil to finally come to a close.

It’s a hard film to recommend, because even though it is extremely well-acted and tightly directed, it deals with such raw depictions and themes of depression that it may hit a little too close for some, and can easily turn people off by how much of a downer it can be. Nevertheless, it’s fascinating to check out even if you yourself have depression; it may make you feel miserable, but you’ll admire how powerfully it’s making you feel miserable.

The Escape can be a very difficult film to stomach, especially if you or anyone you know suffers from depression like the main character of this film does, but it is exceptionally well-acted, especially by Gemma Arterton in a career-best performance, and directed so naturally to a point that the raw and dour themes hit way closer to home than they should.