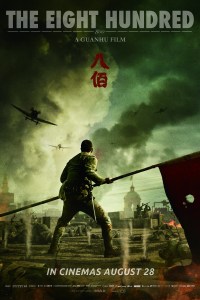 With international film markets still struggling to bring in audiences, one success story lies in China, where Guan Hu’s wartime epic The Eight Hundred has become one of the year’s highest grossers with over $300 million, in its native country alone. That is a decent sum in a normal year of film, but outstanding business during a global pandemic; to put it into perspective, that’s more than what both Tenet and Mulan – two major Western blockbusters which also opened theatrically in China – have made combined, not just in China but worldwide.

The film’s box office success is bound to make some Western audiences curious, because after all who doesn’t enjoy a big, ambitious war movie with plenty of violence and all the usual grim imagery one usually associates with armed combat? However, while it is nearly impossible to fault the movie on a pure technical aspect, The Eight Hundred ultimately fails to fully satisfy your curiosity with an empty script filled with even more empty characters, leaving you with absolutely no reason to care about anything.

Taking place in 1937, during the early days of the Second Sino-Japanese War, several battalions made up of roughly 800 Chinese soldiers are sent to guard a warehouse overlooking the neutral city of Shanghai, which is one of the last few cities to fall to the oncoming Japanese forces. As the city goes about its business as normal, the soldiers fight off constant enemy attacks from land, sea and air over a four-day period, all with the objective of defending the vibrant city that’s right across the canal from them.

Looking at the film, it’s easy to be impressed with the massive level of craftmanship that’s gone into making this movie, from the sets to the sound design which are all quite marvellous in their own unique way. Guan Hu is a rather prolific director in the Chinese film industry, best known for his gangster epic Mr. Six, and you can tell just from this movie that he really knows how to make a movie feel extremely grand and important just from the visuals alone; there are scenes where heads are being chopped off, faces shot through, soldiers jumping from high storeys onto enemies with bombs strapped around their body, and it’s just as insane to watch as it is to describe. Hu also appears to have a knack for making even the corniest of movie moments seem so epic that it almost makes you want to forget how cheesy it actually is; there is a flag-raising scene that is shot, scored and acted like it’s a Roland Emmerich or Michael Bay film, with tears trailing down the faces of every stoic-faced soldier that’s saluting with all their strength as the orchestral music swoons in the background. They really went out of their way to make this movie look and feel as epic as they possibly could, and to some degree that should earn a decent amount of respect.

Where it ultimately flatlines, however, is through its inability to give any sense of an emotional connection to any of it. As fascinating as it is to watch, the action scenes are largely comprised of just things happening, whether it’s heavy gunfire or explosions or whatever else Hu manages to chuck our way, and not once does it give us anyone or anything to latch onto during it all. We are introduced to several characters, most of whom are stock one-dimensional soldier clichés (there’s the hard-ass, the wide-eyed innocent, the cynic, and so on) or random characters who don’t really have anything to do with the main storyline, from a female casino owner to a journalist whose loyalties are a confounding mystery. We don’t spend enough time with any of them to really get to know them, because the movie is essentially a two-and-a-half hour action sequence where faceless soldiers are firing at another group of faceless soldiers, and despite that bloated running time – which becomes especially grating when you think it’s reached its big third-act climax, only to then find there’s at least another half-hour left to go – there’s not a moment where you ever find yourself caring about since it’s given you nothing to latch onto. Because of that, the movie can very quickly become tiresome, since there are only so many times that people can explode or get shot to pieces before the trick gets old, and instead of caring about any of the people who are valiantly (or reluctantly, in some cases) lending their lives to this bloody conflict, you’re more anxious for the film to finally end than actually be invested in this real historical event that actually happened.

It’s a frustrating movie, because on the one hand it’s very well-made and some of the action is admirably brutal, but on the other hand there’s nothing in this movie to latch onto in order to ensure you’re just as emotionally invested as you are visually. You want to be sucked in to this hardcore environment, but there’s nobody there to invite you in; instead, you’re sat there watching a rather numbing war movie that’s undoubtedly epic, but ultimately empty when it comes to anything else. I can definitely see why it’s become such a huge box office success in its native country, but audiences elsewhere might struggle with something that offers zero emotional impact to supplement its visual achievements.

The Eight Hundred is a visually splendid, but thematically empty, Chinese war epic that’s undoubtedly ambitious with director Guan Hu going out of his way to make sure it looks and feels as grand as it possibly can, but a complete lack of characterisation or anything else to properly attach yourself emotionally onto makes it a numbing and quickly dull movie to watch, despite the constant onslaught of war action.

Want to decide what the movie’s like for yourself?
Check out The Eight Hundred showtimes in London
via