The Dissident (Review) – Your Honour, The Prosecution Rests 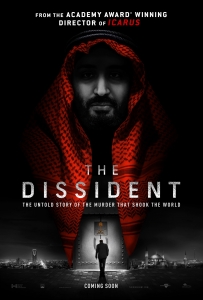 BASICALLY…: An investigative look into the assassination of journalist Jamal Khashoggi, who was targeted by the Saudi Arabian authorities for his outspoken criticisms against the regime…

This review of The Dissident was conducted as part of the Glasgow Film Festival 2021.

Last week – or, if you’re reading this way into the future, on 26th February 2021 – the CIA released an intelligence report confirming what we had all known for years; on October 2nd 2018, Saudi Arabian crown prince Mohammed bin Salman approved and likely ordered the murder of journalist Jamal Khashoggi, within the Saudi consulate in Istanbul, Turkey. The release of the report marked a significant, but bittersweet, new step towards justice for the assassination, although as of writing Mohammed bin Salman – known to others as MBS – and other high-ranking members of the operation have yet to be officially charged for their roles in the crime.

Until the day comes (if at all) when those responsible are finally held accountable, filmmaker Bryan Fogel’s damning new documentary The Dissident provides a heavily sufficient case for the prosecution.

The film is an explosive dossier of insider information from people closest to the slain Saudi journalist, from his fiancé Hatice Cengiz who since his death has campaigned for swift justice against his murderers, to fellow reporters like Omar Abdulaziz who, like Khashoggi, were ousted from their country after their anti-MBS posts on social media began to gain millions of views, to newspaper heads and politicians who sympathised with Khashoggi’s flexing of his freedom to criticise those in power. Throughout, we learn a great deal about not just the lead-up to the murder itself – which we disturbingly get to envision in all of its grisly details – as well as its devastating aftermath, but also the level of power that MBS and other high-ranking Saudi officials wielded (and in some cases still do) in order to maintain their mighty reputation in the press and the public eye.

Among the facts thrown around is how MBS was appointed by his father, the King Salman, to become the head of the state’s anti-corruption taskforce (which in and of itself is kind of like putting Freddy Krueger in charge of a school assembly), and through that was granted the ability to send in an army of “flies” to bombard anti-state social media posts with troll comments, and eventually drown them out with more and more falsehoods that promote MBS’s supposedly progressive plans for the country, while denouncing any political or journalistic rivals who dared to speak out against them. Seeing how easily this taskforce can manipulate social media and, via elaborate hacking software, wiggle its way into private and sensitive material is extremely chilling, and Fogel’s film presents an uncomfortably up-close look at how totalitarian and even Orwellian this entire regime was, well before Khashoggi even set foot inside the Saudi consulate on that fateful day.

Of course, one of the key issues at play here is the importance and the necessity of free speech, which in an era of fake news and overall distrust in journalists makes Khashoggi’s assassination all the more terrifying. As we see via archive footage and audio recordings, Jamal Khashoggi was a reporter who wanted nothing more than to report the truth about his country’s backwards and often barbaric policies, despite MBS’s public desire to promote a more progressive way forward for Saudi society, and that it was simply down to how Khashoggi’s newspaper columns and social media posts were gaining enough of a viewership for him to be considered a potential threat by the Saudi government. The notion that a major governing power would attempt to silence a fierce critic of theirs is sadly not a new concept in this day and age (how often, over the last four years, has the previous US President disavowed and discredited any major news source that he simply didn’t agree with?), although the entire ordeal surrounding Khashoggi and his disturbing fate represents a very troubling notion that a government with unchecked power can, if it so chooses, adopt extreme measures to exterminate someone who dares to have an opinion, something that The Dissident is all too knowing about and does a powerful job of showing just how bad things can get when the very right to have free speech is directly challenged by those in authority.

The Dissident works well as an investigative documentary, with almost every new shocking revelation coming in like meteorites, but also as a compelling political thriller that examines the ruthlessness of Saudi officials’ attempts to drown out any criticism with the use of their “flies” and a stark invasion of privacy. There are a fleeting few moments of light in this otherwise dark story, including when fellow Saudi journalist Omar Abdulaziz attempts to give his government a taste of their own medicine by sending in his own army of “bees” to counteract the flies’ trolling with incessant support for Khashoggi and other critics, but otherwise director Bryan Fogel keeps the dour tone consistent throughout. This is appropriate, because the story of Khashoggi is ultimately a tragic one, and the larger implications that those in power within the Saudi government can literally get away with murder if it means silencing one of their biggest opponents is just as upsetting, if not more so.

It’s a documentary that will no doubt leave you chilled and just a little bit outraged, but at its centre is a man who, at the end of the day, was only doing his job in reporting harsh truths to the world, and wasn’t even being a dick about it. Everyone who was close to him says here that he was nothing more than a gentle soul, including and especially his bereaved fiancé Hatice Cengiz who at one point comments on his love for a La-Z-Boy armchair he purchased for their apartment together, but like so many journalists who were ultimately slain by their own governments, it wasn’t his actions that drew ire but his words, and that was enough to deem him expendable by a very corrupt regime.

Who knows if anything will result from this recent CIA report basically confirming everything we see here, but until decisive action is taken by international leaders and governing bodies, The Dissident will have to serve as a primary source that puts the criminal actions on full display and, quite possibly, will be enough to inspire those who can to finally take action. Stranger things have happened thanks to the magic and the power of the movies.

The Dissident is a powerful and provocative documentary that details the build-up and aftermath of journalist Jamal Khashoggi’s brutal assassination at the hands of the Saudi Arabian government, while also revealing some stark truths about unchecked power and its overall threat to free speech that many people should be paying attention to.