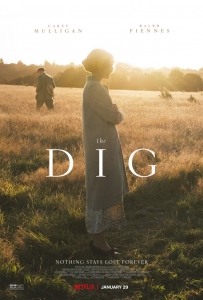 BASICALLY…: In 1939, archaeologist Basil Brown (Fiennes) unearths a historical artefact during the excavation of Sutton Hoo…

Not since Indiana Jones first broke onto the scene have archaeologists had their day in the movie spotlight, and while director Simon Stone’s gorgeous new British drama The Dig is a far cry from the excitement and blockbuster action of Raiders of the Lost Ark, it still manages to achieve the impossible and get some decent dramatic mileage out of your average excavation.

Set primarily on the site of Sutton Hoo in Suffolk during 1939, the film charts the efforts of local excavator Basil Brown (Ralph Fiennes), who has been hired by wealthy widow Edith Pretty (Carey Mulligan) to dig up the giant mounds on her estate, where she suspects some historical treasures may have been buried. As Brown investigates further, he eventually unearths a giant ship that could potentially belong to the Anglo-Saxon period, and upon further excavation – overseen by stuffier representatives from the British Museum – some priceless artefacts confirm that it hails from as far back as the 6th century, in a discovery which attracts national attention, even as the country prepares for the inevitable outbreak of war.

While the prospect of sitting through a nearly two-hour movie about people digging up lost artefacts from centuries prior might not sound particularly appealing to those unfamiliar with the concept of Time Team, The Dig surprisingly keeps things intriguing with the help of some stunning cinematography, and some carefully nuanced performances. Regarding the former, DP Mike Eley’s work on this film is simply gorgeous, taking full advantage of the natural lighting and the wide canvases of the countryside (partly comprised of Surrey, doubling for Suffolk on this occasion) to capture imagery that sometimes feels like it’s straight out of a Terrence Malick movie. It is very dreamlike imagery in that regard, particularly as the camera hovers over and around characters’ faces as frequent voiceover dialogue plays over their still faces, and makes for an exceptionally beautiful viewing experience that’s more effective than any of Malick’s movies ever have been. A Netflix debut seems almost arbitrary for a movie with this much visual pizzaz (though during these times, it’s perhaps the best we could have hoped for), but The Dig still manages to work its pleasant imagery well enough on the small screen.

The performances, too, are top notch, whether it’s from ever-reliable actors like Ralph Fiennes and Carey Mulligan, or from impressive young performers like Archie Barnes who, as Mulligan’s well-mannered son Robert, delivers a very likeable turn as a child character who, if written or performed any differently, could have very easily turned out to be a distracting and manipulative nuisance. These actors have the prim-and-proper British attitude down to a tee, particularly Mulligan whose sophistication in the part knows no limits (and it’ll be even stranger to look back upon when I eventually see her wildly different turn in Promising Young Woman).

There are a great many things to admire about The Dig, but perhaps one of its weaker areas is, sadly, the script. Though there’s not much wrong with how it depicts the main story and its central characters, it’s more what it includes on the side that feels somewhat out of place. There is an entire romantic sub-plot between Johnny Flynn and Lily James, as Edith’s RAF hopeful cousin and the wife of a closeted archaeologist respectively, which feels like it’s only there just to add more drama for the sake of it, even though some of the things revolving around Mulligan’s character invite enough of it anyway. Flynn and James do good work here (and it’s by far the better Johnny Flynn role I’ve seen this month, following Stardust), but their characters feel like they belong in an entirely different movie, instead of this archaeological drama that’s already pretty and enticing without them.

Despite its needless addition of extra drama, The Dig is still a likeable British film with plenty of beauty and warm-hearted charm, and while it’s not quite a major new discovery, it’s a small treasure that you’ll be glad to unearth.

The Dig is a likeable British historical drama that is bolstered by some beautiful cinematography and nicely composed performances, and while the script perhaps adds more drama than there needs to be it remains a nice enough movie to watch at your own leisure.

The Dig is now available on Netflix.