The Devil All the Time (Review)

The Devil All the Time (Review) 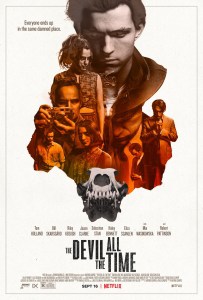 BASICALLY…: In a backwater Ohio town, a young man (Holland) fights the evil forces around him, from a sinister preacher (Pattinson) to a serial killer couple (Clarke and Keough)…

The word “bleak” doesn’t even begin to describe Antonio Campos’ Southern-fried thriller The Devil All the Time. Based on Donald Ray Pollock’s novel of the same name, it is a film that exposes the darkness in peoples’ souls, and also takes every available opportunity to shock or disturb you with some incessantly violent imagery or some very uncomfortable implications.

Sometimes, it’s (quite literally) overkill, and there are points where you can sense that’s all that Campos and his co-writer brother Paulo Campos were aiming for in certain scenes, but the multi-generational drama is enough to keep you hooked, as are the strong performances by a pretty fantastic line-up of actors, making the overbearing bleakness surprisingly compelling.

As mentioned, the movie takes places across multiple years, beginning in 1945 when, after serving in the war, U.S. Marine Willard Russell (Bill Skarsgård) returns to his Ohio/West Virginia Bible belt roots where he meets and marries waitress Charlotte (Haley Bennett), with whom they have a young son, Arvin. After tragic, but characteristically unnerving, events, Arvin is sent to live with his grandmother and step-sister Lenora, who he stays with until both he (now played by Tom Holland) and Lenora (Eliza Scanlen) are teenagers, with the latter being preyed upon by creepy new reverend Preston (Robert Pattinson). As if that wasn’t enough, there’s serial killer couple Carl (Jason Clarke) and Sandy (Riley Keough) who like to take pictures of their murdered “models”, a corrupt sheriff (Sebastian Stan) who’s in deep with some local gangsters, and a delusional preacher (Harry Melling) whose sermons involve him dumping a jar of spiders onto his head, and whose wife Helen (Mia Wasikowska) bears the brunt of her husband’s growing insanity.

How they all tie into each other is intriguing, if a little convenient, but it does give the movie a slightly disjointed feel as it shifts from one focus to another. Any one of these plots could have served as the main storyline in this film, or even as its own episode were this a Netflix mini-series instead, and the way that they are lumped together in this one singular movie can be a little clumsy. We would be focusing on Tom Holland’s character one minute, and then the next we’ve jumped forward a couple of months into the lives of some other characters, or in some cases it flashes back to entire scenes we had previously seen and been told what happens next by the film’s constant voiceover narration. Said narration, provided by Donald Ray Pollock himself, provides mixed results; a lot of the time, it will come in to explain plot points and character motivations to the audience as though we could not figure them out for ourselves, and it will even interrupt pivotal conversations just to tell us what a character is thinking. It seems like Antonio and Paulo Campos were perhaps a bit too literal in adapting Pollock’s book, because the narration sounds like it was ripped straight from the page and into the script, often betraying the “show, don’t tell” rule of visual storytelling which can get frustrating when you’re trying to watch a movie instead of listening to an audiobook.

Despite the incessant narration and disjointed approach, the film is admirable in how it sticks to its gritty, overly dark guns throughout most of its running time, with barely a moment of light relief in the entire thing. There is some pretty grotesque imagery that the movies does not shy away from, whether it’s a crucified dog or a fatal act of violence under insane pretences, and while at times it does feel like it’s there purely to shock the audience into submission, it doesn’t make it any less effective when you see it. Similarly strong are the performances in this film, which range from legitimately menacing to sadistically camp, but always good enough to keep you hooked; Tom Holland, marking a radical tonal departure from his usual lighter fare, delivers a very good turn as our de facto lead (though even he is not exempt from having just as disturbed notions as his co-stars), easily carrying this heavy material on his capable shoulders. Among the other highlights are Robert Pattinson, so intimidating as the skeevy, predatory reverend that not even his silly accent can completely distract from his intensity, and Jason Clarke as a serial killer with a severely warped view of the world. There isn’t a sour note in this ensemble, as all of the actors remain firmly committed to the deranged material, even if it means going over-the-top in ways that are still sustainable.

Ultimately, it depends on your taste for pitch-black, gritty-as-hell Southern Gothic melodrama, which can be fine for some but off-putting and unpleasant for others. For me, there was enough material here to keep it afloat, and the performances are so compelling that they left me all the more interested in characters who, on paper, perhaps might not be as interesting. A decent thriller, if not an especially outstanding one, The Devil All the Time is intriguing most of the time.

The Devil All the Time is a bleak and extremely gritty slice of southern-fried melodrama, which boats plenty of outstanding work from a committed ensemble cast, among them some impressive turns by Tom Holland and Robert Pattinson, and a strand of storylines that were interesting enough to hold interest, even if the structure can often be messy, as can some wildly unnecessary narration.

Want to decide what the movie’s like for yourself?
Check out The Devil All the Time streaming links
via