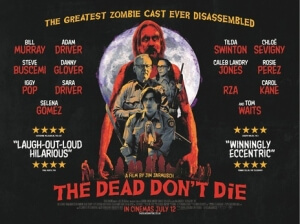 BASICALLY…: A series of strange events occur in the sleepy town of Centerville, culminating in the surprise arrival of the undead…

In a recent interview with Rolling Stone, Jim Jarmusch – the director of zombie horror-comedy The Dead Don’t Die – declared that he’s actually not a huge fan of the undead. “They’re lifeless forms. They’re soulless humanoids. They’re an excuse,” he says, even adding that he’s “more of a vampire guy” which makes sense given that he made bloodsucker flick Only Lovers Left Alive back in 2014.

You can absolutely tell that The Dead Don’t Die was made by someone who’s not fond of zombies, because this movie is so lifeless and so unexciting that it makes the several reanimated corpses look like living, breathing and talking human beings.

Taking place in the sleepy town of Centreville, a series of strange events start to occur. First, the daylight seems to be sticking around for longer; then, all the animals seem to run away; and finally, the dead begin rising from their graves as a strange purple glow blankets the moon. The town’s residents – including police officers Bill Murray, Adam Driver and Chloë Sevigny, katana-wielding mortitian Tilda Swinton, store owners Caleb Landry Jones and Danny Glover, racist farmhand Steve Buscemi (wearing a red hat that says “Keep America White Again”), young traveller Selena Gomez, and hermit Tom Waits – all now have to deal with the undead coming back to eat their flesh.

It sounds pretty straightforward, but Jarmusch’s film is such a slog that the zombies don’t even start returning until halfway in; until then, its painfully thin characters spend their time doing next to nothing, all of them delivering their stilted dialogue in dry monotone and acting just as bored as the audience is. Even when the undead does start coming back, nobody seems to have any other kind of reaction other than just a dismissive shrug and they stay that way for the whole rest of the movie; I really don’t understand how the writer and director of Paterson, one of the most naturally-performed movies of the last few years, could go on to make a film where nobody comes even close to feeling natural. Nor can I truly see how such a big cast – marketed as “the greatest zombie cast ever disassembled” – could be wasted by a director who’s proven to be much better than this; so many of these characters could easily be cut as the vast majority of them are pretty pointless, particularly Selena Gomez and her friends as a young group of “hipsters” (although they’re acting no different than anyone else in this movie) and a few inmates at a local detention centre whose stories all lead absolutely nowhere. There are other cast members who only show up here as a reference to their real-life persona, such as Rosie Perez who appears as a newscaster by the name of Posie Juarez, and Wu-Tang Clan member RZA shows up as a delivery man working for “Wu-PS” (there’s even a Star Wars reference when Adam Driver’s character is shown to have a Star Destroyer keychain), which makes you think that these actors, along with Jarmusch, are all part of a joke that we the audience are not in on, and it’s deadly frustrating as not only is the joke not at all funny but is so convoluted that it’s more of a lecture than a punchline.

Jarmusch does seem keen on lecturing the audience about what his zombie film is all about, as he lacks the subtlety of classic zombie filmmakers like George A. Romero and Lucio Fulci so much that instead of showing us what the social commentary is he will just have Tom Waits explain it to the audience. It’s as though Jarmusch thinks that what he’s saying about modern consumerism and reliance on everyday items like our phones and coffee turning us all into living zombies, something that Romero did so much better in Dawn of the Dead back in 1978, is something that no other movie about the undead has ever talked about, and he flaunts it around in such a smug and pretentious way that it feels like an amateur filmmaker trying to transcend the standard genre tropes and make something more “artistic”. Instead, it comes across as annoying, pandering, and incredibly self-indulgent, as actors break the fourth wall to practically promote the film’s signature title track as sung by Sturgill Simpson, and to stop the movie dead to point out that the car which Selena Gomez is driving is straight out of a Romero movie. It’s irritating hipster fodder, made by someone who has been behind some very good movies in the past, yet for his most mainstream movie to date has delivered perhaps his worst, or at least his most underwhelming.

There are so many other zombie movies you could be seeing instead of this one, and certainly plenty more zombie comedies which there now seems to be more of than just straightforward zombie flicks. Any one of them does what Jarmusch tries doing in this film in far smarter and more subtle ways, from how the zombies relate to real-world paranoias to the ways in which they are properly killed, which are all things he would probably know and be more passionate about if he actually liked the very thing he was portraying in this film. Having someone who doesn’t much care for zombies make a film about the undead is like having an atheist make a film about Jesus; good for them for stepping out of their comfort zone, but the passion and the genuine drive behind it is well and truly dead with zero chance of coming back alive.

The Dead Don’t Die is a passionless, wildly pretentious slog of a zombie movie, with writer-director Jim Jarmusch – who has been outspoken about his disinterest in the undead – failing to make it an enjoyable experience with its paper-thin characters that wastes its starry cast and overly-obvious themes that so many other zombie movies have done much better than this.

Check out The Dead Don’t Die showtimes in London
on Walloh.