The Day Shall Come (Review)

The Day Shall Come (Review) 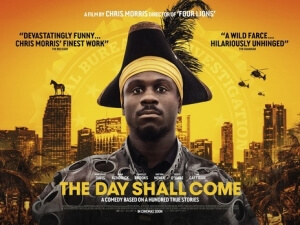 BASICALLY…: An impoverished preacher (Davis) is targeted by the FBI who intends to turn him into a criminal…

Almost ten years ago, comedian Chris Morris did the unthinkable with his debut feature Four Lions: he made suicide bombing funny. Harrowing though the subject may be, the way he managed to show the raw idiocy of radical Islamist converts was unprecedented in the wake of several major terrorist attacks over the previous decade, but his wicked sense of humour shone through as the would-be bombers got into one ridiculous scenario after another.

Following up a comedy about a very-not-funny subject with something that’s even more poignant and serious is not as easy as it seems, which is probably why it’s taken Morris this long to make his second feature. The wait was worth it, though, as the themes at the core of The Day Shall Come not only ring disturbingly true in today’s populist climate, but in typical Morris fashion they are portrayed in uproariously funny and intelligent style.

“Based on a hundred true stories,” the opening titles tell us, and quickly you understand what they mean by that. Set in an impoverished Miami neighbourhood, we are introduced to Moses Al Shabaz (Marchánt Davis), the leader of a movement that hopes to peacefully eradicate the gentrification that’s slowly taking over. It’s very clear that he is not a danger to anyone or anything – his congregation only has four people, he dissuades the use of guns and violence (except for toy crossbows), and he is extremely delusional, convinced that both God and the devil will communicate with him through a duck, and that the government is secretly holding dinosaurs that will come to his aide when he uses a blowhorn. Despite that, he becomes the target of an FBI sting designed to incriminate any possible threats, driven largely by agents’ – among them Anna Kendrick’s Kendra and her boss (Denis O’Hare) – self-interests and attempts to boost their careers rather than a genuine desire to keep their country safe.

Despite the current US President never even being mentioned by name, it’s clear that his ideas of nationalism and unfair treatment of disadvantaged minorities are Morris’ targets here. The cynicism towards those who pose little to no threat by the people whose job it is to protect them from danger is staggering in this film, as you see these FBI agents bragging about convicting misled would-be terrorists like they’re bowling trophies, rarely even considering the lives they have just ruined. Their institutionalised racism aside, which is one of the few times that the satire feels a little too on-the-nose (“Unarmed black man, unarmed white man, which one is more likely to have the gun?” a character yells at one point), Morris portrays them as opportunistic and grossly unsympathetic narcissists more concerned about how they look than the people they’re setting up do.

On the flip side, Morris digs deep into the wildly strange nature of street revolutionaries, particularly ones that found themselves on bizarre beliefs like being able to talk to animals. Brought to life by a rousing performance by charismatic newcomer Marchánt Davis, Moses is an eccentric for the ages; his sect incorporates everything from the prophet Muhammad to Black Santa (which his congregation tries to create by applying permanent marker to a Santa figurine), to rigorous exercise regimes designed to prepare his limited congregation for any possibility in an upcoming race war. Beyond the character’s weird practises, which the actor completely throws himself into, Davis brings hapless charm to the well-intentioned but clearly insane preacher. You see how much he loves his wife and daughter, as well as his cause and the few people who have decided to join his flock, which gives you the idea that, were he not so delusional and if he actually took his medication, he could be a truly upstanding member of the community.

The way that this movie goes, however, sees that idea slowly slip away from reality. Both plotlines come to a head during a climax that continues the strong satirical comedy, but concludes with a final coda that’s both sobering and devastating. The strength of Morris’s comedy, other than being wildly funny, is how it sheds light on very real issues not just with a wicked sense of humour but also with a genuine plea for people to recognise that they are, indeed, very real issues. With The Day Shall Come, he and co-writer Jesse Armstrong find a way to have you laughing at some of the crazy antics these characters find themselves in – at one point, they have to negotiate with a group of neo-Nazis led by Jim Gaffigan about a uranium deal – but by the end of it firmly remind the audience that, beyond the laughter, this is a very tragic and unfair situation. Their writing is so on-point and smartly conveyed, that you end up feeling shocked that this farcical comedy actually went to places you’d barely expect most other movies to go, regardless of what genre they are.

It’s a movie that will definitely have you laughing in all of the right places, but will also leave you thinking about how unnervingly real this situation is for a lot of people that have gone through all of this. By the end of it, you believe that The Day Shall Come was based on a hundred true stories, because the truth feels a lot more tragic and farcical than anything you’d find in the fictional section.

The Day Shall Come is at times a hilarious send-up of both the eccentric nature of would-be revolutionaries and the institutionalised cynicism and racism of the justice system, but at other times is also a sobering and rather devastating tale of injustice that only writer-director Chris Morris could tell with a wicked sense of humour as well as an honourable rallying cry against the way things are done.

Want to decide what the movie’s like for yourself?
Check out The Day Shall Come showtimes in London
via