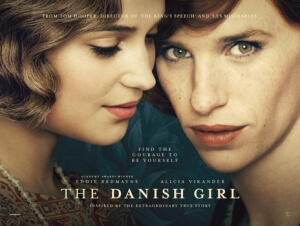 BASICALLY…: After posing as a woman for his wife Gerda’s (Vikander) painting, Einar Wegener (Redmayne) develops a fascination for the female anatomy – and starts living life as “Lili Elbe”…

The transgender community has never been more accepted nowadays in modern culture, even though controversial figures like Caitlyn Jenner continue to make headlines for not necessarily the right reasons. This has also ripened the opportunity for multiple films and shows to make their mark in representing this minority, from the award-winning series Transparent to the little-seen indie flick Tangerine – but perhaps the most prolific film to highlight a transgender figure to date is Tom Hooper’s The Danish Girl, a beautiful but imperfect attempt to tell the story of one of the pioneer transgender figures, Lili Elbe.

Eddie Redmayne is Lili, who is born as Danish painter Einar Wegener (also Redmayne), along with his wife Gerda (Alicia Vikander), playfully experiments with cross-dressing after he poses in a dress for one of Gerda’s paintings. It turns out to be more than just a game, however, when Lili starts to become more prominent and even taking Einar’s place in husband-and-wife situations, and as their marriage starts to become more strained they together seek an answer to Lili’s conflict: an untested surgical procedure that can literally transform Einar into Lili permanently.

Those who know the history surrounding the real Lili/Einar might be aware of the more tragic elements that said procedure would eventually incur, and though Lucinda Coxon’s screenplay might not be a wildly accurate portrayal of the events – certain pieces of information about the real Einar and Gerda’s marriage are left out, as are Gerda’s more famous Lesbian Erotica paintings – it remoulds the story to deliver a more audience-friendly drama that is surprisingly effective enough to make us not really care about the historical inaccuracies or even the light dramatic weight that it honestly could use more of.

That is partially down to the two leads cast to play fairly difficult roles – but though Redmayne is front and centre in all the film’s promotional material, it really is Vikander’s movie, or at least it’s as much her film as it is Redmayne’s. Vikander is a striking presence in both her physicality and her emotion, and she brings a welcome few dimensions to someone who could have so easily been a one-note supportive wife-cum-friend and is instead a heavily engaging and interesting character; a trait that the native Danish actress previously brought to such films as Testament of Youth, The Man From U.N.C.L.E and especially Ex Machina, and now proudly brings to this film as well. As for Redmayne, he is no less excellent; though perhaps it’s not quite as impressive a performance as his Oscar-winning turn in The Theory of Everything (and also Jupiter Ascending, but for all the wrong reasons), he still manages to impress in a very complex role that sees him all too literally switch from person to person of different genders, akin to the inner workings of a schizophrenic patient – the idea of mental illness, incidentally, is touched upon in the film, though not entirely fleshed out. Both actors share a visceral chemistry with each other, ranging from playful to passionate to genuine supportiveness, and they are collectively the biggest highlight of the film.

As ever with a Tom Hooper film, the production values all look astonishing, from the sets to especially the costume design all standing out, although his and cinematographer Danny Cohen’s particular fascination with certain camera angles, close-ups and blocking continue to be slightly distracting for us as we try to take in the scenery that the film provides for us (this was a slight niggle with Hooper’s Les Miserables and, to an extent, The King’s Speech). That might be just a personal irritation, and it by no means ruins the film in any way; it is still a beautiful-looking movie that is anchored by two excellent lead performances that both deserve a fair share of awards attention over the next couple of months, though the film itself doesn’t truly warrant the attention that The King’s Speech got a few years ago.

Either way, it’s wonderful to see the transgender community finally start to be represented with more dignity in media, and we hope that with The Danish Girl and other properties like Transparent and Tangerine there can be more of an appetite for more of them in films to come – just as long as they’re not entitled The Caitlyn Jenner Story.

The Danish Girl may not inspire the same amount of universal praise that director Tom Hooper previously experienced with The King’s Speech or Les Miserables, but it is still a beautifully-told story anchored by two equally impressive and awards-worthy performances by Eddie Redmayne and Alicia Vikander.