The Curse of La Llorona (Review)

The Curse of La Llorona (Review) 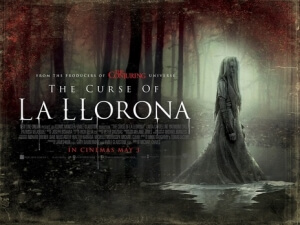 BASICALLY…: A social worker (Cardellini) learns that a sinister being known as La Llorona (Ramirez) is after her children…

It was confirmed recently, following its debut at the South by Southwest Festival in Austin, Texas, that The Curse of La Llorona is, in fact, part of the Conjuring Universe. Having seen it, I can say that it is true; this seemingly unrelated horror flick, which just so happened to have James Wan on board as a producer, is connected to the respective Conjuring and Annabelle film series, not to mention The Nun as well as the in-development spin-off about The Crooked Man from The Conjuring 2.

In what way is it connected, you may be curious to know (and with as few spoilers as possible)?  The answer’s very simple; actor Tony Amendola shows up for a few scenes as the same character he played in the first Annabelle movie, and at one point refers back to the events of that film. That’s really about all the connection this film offers – other than that, The Curse of La Llorona is very much a standalone movie, and that’s honestly for the best; while this isn’t the very worst of the Conjuring Universe to date, it’s definitely one of the least effective.

Taking inspiration from the real-life Mexican folklore of La Llorona – the “Weeping Woman” – who drowned her children in a fit of jealousy and now preys upon young children to claim as her own, the film takes place in early 1970s Los Angeles, where widowed social worker Anna (Linda Cardellini) looks after her two young children Chris and Samantha (Roman Christou and Jaynee-Lynne Kinchen respectively). She investigates the case of local mother Patricia Alvarez (Patricia Velásquez), whose young sons soon show up dead; the mother is placed under arrest for suspicion of the murders, but she blames La Llorona for their deaths. Soon, Anna learns that the spirit has now set her eyes on Chris and Samantha, and will stop at nothing to claim them – unless she calls upon some help from experts who know their stuff about evil spirits of this variety.

No, I’m not talking about the Warrens; apparently, there were more pressing matters for both Ed and Lorraine than a mere ancient Mexican demon haunting and then killing children (don’t fear, Conjuring fans, for they will pop up later this year in Annabelle Comes Home). Instead, we get former priest Rafael (Raymond Cruz, better known as Tuco from Breaking Bad) who shows up late in the game to inject a little more charisma into what has been up to this point a very by-the-numbers and largely scare-free horror movie with not a whole lot of life to it. Nothing about this movie transcends beyond just being passable; the acting, the direction – provided by Michael Chaves, who is currently tapped to direct The Conjuring 3 in the future, the cinematography, the atmosphere, and especially the scares, are all just okay, with not a whole lot to them that stands out from other movies in this shared universe, or even other horror movies in general. Much like the first Annabelle movie, this is mainly just a bland affair that relies way too heavily on jump-scares and doesn’t have enough interesting characters to sustain any amount of intrigue to warrant any additional viewings.

The fact that they really seem to have gone out of their way to advertise this as another addition to the Conjuring Universe feels largely pointless, as this movie could exist regardless if it shared the same continuity as the Annabelle movies. It feels like it was mostly just a marketing plot to mount interest in a horror film that was likely to have faded into obscurity had it not been linked to those other films, in a move that stinks of desperation from a studio determined to not have let the small amount of money they put into this film gone entirely to waste (to their credit, the ploy worked; it managed to gross $26.5 million during its opening weekend in the States next to a $9 million budget). Even then, this film still won’t be remembered as an integral part of the series; it’s filled with one lame jump-scare sequence after another, and characters who do one dumb thing after another just so that the plot can move forward – a moment during the climax featuring one of the children is bound to be a make-or-break moment for anyone who still has any investment in these people – as well as heaps of exposition that undermine the chilling effects that the filmmakers were going for with this story.

There are a couple of stand-out sequences that do actually work, such as a legitimately unnerving scene set inside a car during the film’s first act, where the acting, cinematography etc really do elevate the scene and achieve enough chills to be worthwhile, but they are largely far and few in between. Everything else merely goes in one ear and out the other, so lightly that you’ll barely have noticed there was anything in your ears in the first place; not much aside from those rare effective sequences really sticks out enough for the film as a whole to be considered an essential watch, with some adequate filmmaking, adequate acting, and adequate scares.

Put this one down as being more for completionists of this series, kind of like how The Incredible Hulk is to the Marvel Cinematic Universe; not an entirely bad watch, and certainly not one that you’ll be mad at whilst watching it, but so unessential that there’s not much point in even checking it out, especially when there’s far better movies within the same franchise to check out instead.

The Curse of La Llorona doesn’t offer much in terms of fresh scares or interesting plotting and characters worth caring about, and its connection to the Conjuring Universe is largely pointless as well as a further reminder that there are much better horror movies in this franchise you could be watching instead.

Check out The Curse of La Llorona showtimes in London
on Walloh.