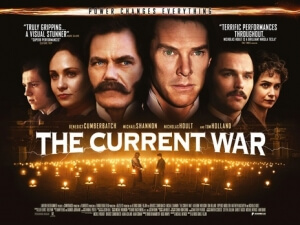 BASICALLY…: Thomas Edison (Cumberbatch) and George Westinghouse (Shannon) become embroiled in a race against each other to bring a new form of electricity to the world…

It may be a historical film, but The Current War also has a little bit of history to itself. It was originally set for an awards-season release in late 2017, but after it received less than glowing reviews following its debut at the Toronto Film Festival, the film’s producer brought it back in for re-editing in time for its end-of-year launch. Unfortunately, that producer was Harvey Weinstein, and once those sexual assault allegations came to the public’s attention, the film was shelved indefinitely as it had his fingerprints all over it.

It wasn’t until The Weinstein Company’s assets were sold off to other distributors following its bankruptcy that the movie finally got back on track. In that time, director Alfonso Gomez-Rejon – previously of Me and Earl and the Dying Girl as well as the reimagining of cult horror The Town That Dreaded Sundown – claims to have added five new scenes into the final cut, and somehow managed to trim ten minutes of the film in the process, so the version that is, at last, being released in cinemas is a brand-new edition completely separate to what was first shown nearly two years ago in Toronto.

Honestly, everything I just mentioned about the troubled release history of this film is far more interesting than the film itself; while it is stylistically ambitious, it is a messy and erratic narrative with so much stuff happening yet very few reasons to actually care.

Opening text explains that, in the late 19th century, inventor Thomas Edison (Benedict Cumberbatch) and entrepreneur George Westinghouse (Michael Shannon) were competing in a battle to be the main source of energy for the modern era; Edison is promoting electricity, while Westinghouse is pushing for gas. The film charts their ruthless attempts to discredit one another in order to get ahead, from Edison claiming in the press that Westinghouse’s alternating current system is far more deadly than Edison’s direct current, to Westinghouse partnering with fellow electricity pioneer Nikola Tesla (Nicholas Hoult) to try and win a contract to light the upcoming Chicago World Fair.

It’s an interesting story, as it shows the development of a truly game-changing energy source from the perspective of two (or three, if you could Tesla) fascinating historical figures, but you can easily tell that this was a movie that had been sitting on the shelf for a while, because it’s all over the place in how it’s edited and structured. It is deliberately fast-paced, with quick-fire editing to-and-froing in between scenes and Gomez-Rejon bringing a heavy sense of style to the cinematography and framing that occasionally makes it feel like Moulin Rouge! if nobody started singing, but it’s a thin attempt to mask a script with few sympathetic characters, confused tones, and dramatic plot developments that spring out of nowhere to suddenly amp up the tension. Events and even years will just suddenly go by before you even have a chance to soak it all in, and it rarely allows itself a moment to breathe before it moves on to the next big development in this story. So much stuff happens here that major deaths and even characters like Nikola Tesla, a major figurehead in this ongoing battle for energy dominance, are either glossed over or given such little time to shine that it feels pointless that they’re even depicted in this film to begin with.

Narratively, it’s clunky and wobblier than the loosest Jenga tower, and it crams in so much except fundamental reasons to care about any of it, because neither Edison nor Westinghouse are written to be sympathetic enough in their separate plights to come out on top. You don’t really side with Cumberbatch’s Edison because he comes across as a smug prima donna who’s far more invested in fame and notoriety than anything else, and Westinghouse doesn’t really have much character outside of the fact that he’s played with as much intensity as ever by Michael Shannon; both actors do well under the circumstances, but even they can’t bring the spark needed to make these two interesting historical figures work in this context. You also get the feeling that Gomez-Rejon is far more enamoured with his own style than the characters he had been hired to bring to life, because the tight close-ups, tricksy camera movements, rapid-fire editing and scattered framing tend to take up more precedence than his actors, and on top of that it really doesn’t fit the tone and feel that this script was aiming for. It’s admirable that it doesn’t look exactly like most other period pieces such as this, but at the same time this out-of-place style becomes distracting as all you’re thinking about is how much it doesn’t match the numerous dialogue scenes and dramatic plot turns, especially when there’s nothing much else about this movie that’s really interesting (other than its rollercoaster of a release history).

Obviously, I didn’t see the original cut at Toronto back in 2017, so I have no idea how this newly-edited version compares, but I don’t need to have seen the previous version of The Current War to identify the fundamental flaws in storytelling and emotional investment that plague this style-over-substance movie to no end. It might have benefitted from more time in the editing room, which is really saying something about a film that was delayed for nearly two years, but as is it’s an invention that just doesn’t take off.

The Current War has an ambitious visual and directorial style, but it only serves to mask a script that doesn’t give the audience a reason to care about its fascinating real-life story, nor about its central historical figures despite expectedly strong turns from actors Benedict Cumberbatch and Michael Shannon, though they’re not enough to save a movie from its own mess.

Check out The Current War showtimes in London
on Walloh.