The Croods 2: A New Age (Review) – A Family Sequel With Perhaps Too Much Energy 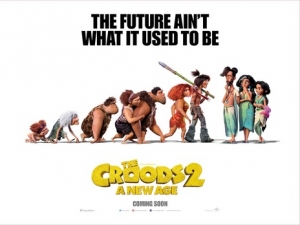 BASICALLY…: The prehistoric Crood family comes across a more civilised clan and their advanced way of living…

DreamWorks Animation’s 2013 prehistoric comedy The Croods was well-received by critics, did well at the box office, spawned a Netflix spin-off show, and even scored an Oscar nomination for Best Animated Feature – but for some reason, it’s since become one of DreamWorks’ least-remembered properties. People tend to think of properties like Shrek or Madagascar or even The Boss Baby before The Croods when it comes to describing the animation studio, which is a little unfair because the film is a fun and visually-dazzling family adventure (at least, it is from what I remember of it, since it has been a good few years since I last saw the film) that is a touch above some of the studio’s much-lesser entries.

Still, it’s surprising that they decided to go ahead and make a sequel, albeit one that has faced numerous challenges on its road to the screen. Originally announced shortly after the box office success of the first film, the sequel – which would go on to become The Croods 2: A New Age – remained in development for a potential 2018 release, until it ended up being cancelled not long after Universal’s acquisition of DreamWorks Animation back in 2016, only for production to then be back on nearly a year later, this time set for a release in late 2020. Then, of course, 2020 happened, and it ended up being released in the States as both a theatrical and VOD release, while its mooted UK release around the same time ended up being pushed back and back until, finally, it arrives on British shores some 8 months after its Stateside debut.

All of that for a movie which is only decent; while it doesn’t quite compare to some of the stuff in the original (again, from what I remember of it), there’s enough for families to enjoy, though this one is perhaps a bit too kid-friendly for adults to fully wrap their more-developed heads around.

In the sequel, we once again follow the caveman clan of the Croods on their journey across the prehistoric landscapes to find a new home for themselves. There’s patriarch Grug (Nicolas Cage), his wife Ugga (Catherine Keener), their teenage daughter Eep (Emma Stone), clueless son Thunk (Clark Duke), feral toddler Sandy (Kailey Crawford), the children’s ancient grandmother (Cloris Leachman, in one of her final roles before her death earlier this year), and Eep’s more advanced boyfriend Guy (Ryan Reynolds). During their search, the family comes across a walled-in paradise that’s rich with food and water, and is owned by another, much more sophisticated family called the Bettermans, consisting of smug couple Phil (Peter Dinklage) and Hope (Leslie Mann), and their wide-eyed teen daughter Hope (Kelly Marie Tran). Both families initially struggle to get along – Grug is unimpressed by the civilised and condescending attitude of the Bettermans, while they aren’t so pleased about sharing the land with people who don’t even know how to properly behave – but when danger comes along that threatens both clans, they have to work together in order to set things right.

This one is a much more contained adventure with these characters, which means that there isn’t as much world to explore in this one as I distinctly remember there being in the first; most of the action is spent around this small Eden-like utopia that the Bettermans have constructed, with both the Croods and their new friends constantly at odds over their very different ideas of living. It doesn’t quite venture into Flintstones-style sitcom territory (although, there are a lot of anachronistic devices and phrases repurposed for prehistoric times here as well), because there is more of a focus on the different ideologies of these families; Grug is much more used to a wilder way of living, so is understandably conflicted when members of his own clan become so quickly enticed by the mere prospect of sleeping in actual beds as opposed to together in a pile, and it’s also easy to see why the Bettermans are so put off by the oafish and unkempt manners of the Croods, even if they are so snide and impolite about it. Thematically, it’s probably a stronger film than the first, but save for a few sequences that do venture outside the perimeter of this singular place – which are all gorgeously animated, and feature some rather creative creature designs such as wolf-spider and kangaroo-armadillo hybrids – it’s not as vast or explorative as a sequel of this magnitude could have been.

While the film does score a few decent laughs every now and then – a running gag about animals being poked in the eye with sticks is accompanied by a hilarious screech that surprisingly doesn’t get old – it’s one of those animated children’s movies where nearly every other line is loudly exaggerated for comedic purposes, with rapid-fire action and editing which can become a little exhausting after a little while, especially when there aren’t enough funny jokes to carry itself. There’s not much wrong with the actual delivery of the humour, as the voice acting on a whole is very lively and energised (Nicolas Cage is, as always, a highlight behind the microphone), but the way some of it is written is very ADHD-like, constantly moving from one thing to another with barely a pause so that viewers both young and old can catch their breath before the next big laugh-out-loud moment. In the screening I was at, there were young children who were noticeably getting more and more restless, not necessarily out of boredom but more so from an overabundance of energy being projected from the screen, and that can be a serious problem when there aren’t enough moments in the film which are there to calm things down and get itself back on track.

It does boast some excellent animation, and like I said the voice acting is rather good as well, but I can see this going over much better with kids rather than parents, because it speaks perhaps a bit too much to their energy levels while not giving enough for the older audience members to cling onto as their children are entertained. I do want to stress, I don’t think this is a bad film by any means, but in terms of pure entertainment that speaks to people of all ages, you’re actually far better off with Space Jam: A New Legacy than The Croods 2: A New Age – take that for what it’s worth.

The Croods 2: A New Age is a decent family sequel that boasts some gorgeous animation and lively vocal performances, but it might be a little too energised and contained for older viewers to fully appreciate as much as younger ones.

The Croods 2: A New Age is now showing in cinemas nationwide – click here to find a screening near you!