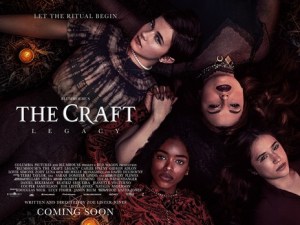 BASICALLY…: A group of teenage girls form a coven of witches, which grants them special powers with a sinister cost…

It’s fair to say that nobody really wanted to see a sequel to The Craft. Although the 1996 supernatural teen flick has developed a cult following since becoming a sleeper hit at the box office, it’s largely seen outside of its dedicated fan base as a mere time capsule of the angsty goth faze of the mid-to-late 90s, which 24 years on is a lot more susceptible to ridicule because, well, it’s The Craft: a movie that even Marilyn Manson would tell to ease off of the attitude.

That being said, the film is popular enough within its fan base to warrant a decades-later follow-up, this time with Blumhouse extraordinaire Jason Blum in charge along with director and writer Zoe Lister-Jones, and who knows: it might be interesting to explore what a teen witch coven in 2020 might look like, and how different it might be to how it was nearly a quarter of a century ago. The surprising news is that The Craft: Legacy isn’t as terrible as it could have been; the less surprising news, though, is that it’s probably not going to inspire as big a following as the original, for several strange reasons.

In this film, teenager Lily (Cailee Spaeney) arrives with her mother Helen (Michelle Monaghan) in a new town, to live with her mother’s new self-help guru boyfriend Adam (David Duchovny) and his three sons. She initially struggles to fit in at school, especially after an embarrassing menstrual episode, but she is quickly befriended by three girls: Frankie (Gideon Adlon), Tabby (Lovie Simone) and Lourdes (Zoey Luna), who have formed their own witches’ coven and invite Lily to be their vital fourth member. Together, the girls discover that they can harness several supernatural powers, from being able to freeze time to levitate off the ground to even changing people’s entire personalities, but they soon realise that their newfound abilities might just come at a cost.

Casting aside any similarities to the 1996 film – and there are a few; even certain lines of dialogue are repurposed to fit the context of scenes in this, albeit in a slightly forced manner – the film I was placing this next to the most in my mind was last year’s Black Christmas remake, a movie which does very identical things that The Craft: Legacy does, such as a firm fixation on female empowerment messages, a “woke” attitude which demonises anyone who speaks ill of any oppressed groups, and an oppressive patriarchy that ultimately serves as the film’s big bad. However, whereas Black Christmas circa 2019 was an unsubtle, obnoxious, and somewhat mean-spirited approach to all those things, The Craft: Legacy opts for a gentler, more mindful tone that you’re more inclined to listen to because it isn’t constantly spewing venom at everything and everyone with dialogue made up entirely of Twitter buzzwords. Here, you actually do get to like the characters and sympathise with their struggles a lot more, because not only are the performances from our four leads very lively and chirpy – all four of them share a really strong chemistry that makes you buy why they have all decided to become friends – but the film actually lets us spend enough time with them to determine that despite their witchcraft, they are a bunch of teens who are just enjoying their lives together. There are scenes where some of these characters get to share tearful monologues with each other, and they’re actually a lot more effective than they would be if they just suddenly came out of nowhere with very little build-up. In some aspects, this is what Black Christmas 2019 should have been: an update on a cult classic which clearly has stuff to say, but says it in ways that do not alienate its audience or make them feel terrible afterwards.

However, in the case of this film, perhaps it has a little too much to say. The film tends to be overstuffed with several themes and plotlines which sometimes end up going nowhere (for example, a revelation that a male school friend had a fling with another boy isn’t looked into as deeply as its sudden introduction into the conversation), so much so that the supernatural element takes a back seat half the time, only properly re-emerging in a climax that makes this film a better fit with The New Mutants than The Craft. Certain twists surrounding particular supporting characters also feel rather oddly shoehorned in, as though the film decided at the very last minute that it needed a villain for no reason, and that they would also have some sort of supernatural hold which up to this point has been unexplained and in no way set up. It’s a bit of a mess, as it’s clearly juggling a lot of things at once – a supernatural thriller, a coming-of-age drama, a jump-scare horror complete with not one but two fake-out dream sequences – but can’t keep up enough to keep them all flying in the air.

The movie is certainly flawed, often heavily so, but there never really came a point where I was regretting watching it. As a sequel to The Craft, it knows when to homage the original and when to just simply do its own thing, an admirable quality you don’t often find in decades-late follow-ups, even though it doesn’t hold up in other departments – it’s completely unscary, for one – but again, the cast makes it likeable enough to at least recommend as a streaming option for teen girls in the same way the original movie was to adolescents in 1996 – just don’t count on this one getting as big of a following, though.

The Craft: Legacy makes some interesting updates on the 1996 cult classic, paying homage to the original while fundamentally doing its own thing which is likeable enough, although it perhaps juggles far too many plot threads which end up falling apart towards the end.

The Craft: Legacy is out now in cinemas across the UK.