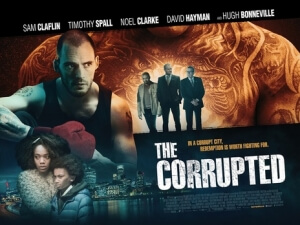 BASICALLY…: Fresh out of prison, Liam (Claflin) is determined to win back the love and trust of his family, and to rid himself of the crime syndicate he was associated with…

Man, Entertainment Film Distributors has been weird lately; for every quality movie they’ve put out like Hereditary or Lion, there’s about at least two other completely random movies they’ll also release that seem to have come out of nowhere to terrify audiences in a completely different sense. Last year, they gave us 2018’s worst movie Status Update which somehow managed to get a nationwide theatrical release despite almost zero advertising for it (or maybe that’s because the movie is so bad that a trailer for the bloody thing may have scared even more people away), and the year before that they managed to secure the release for the Scott Eastwood vehicle Overdrive, which I completely forgot about until I looked it up for the purposes of this review, so it obviously didn’t leave that much of an impression on me.

Now, they’ve done it again with The Corrupted, a British crime thriller which has a pretty strong cast – Sam Claflin, Timothy Spall, Noel Clarke and Hugh Bonneville among others – yet for many the first time they would have heard of it was when cinema chains across the country began listing showtimes for it earlier in the week; again, no trailers were ever put out to front of other movies (at least, not to my knowledge) and virtually no reviews began showing up until the day of release, so imagine how I felt when I was just scrolling through all the week’s new releases and then came across a movie which up to that point I had never even heard of.

Naturally, then, I went in to this one blind, without even watching its trailer online beforehand (because if EFD aren’t going to bother spreading it around to others in cinemas, then I’m not going to give them the satisfaction), and I came out of it still not knowing what exactly it was that I saw. Don’t get me wrong, I know that what I saw was most certainly a gritty crime thriller, but I wasn’t sure if it was a feature-length movie or an entire series’ worth of Line of Duty crammed into one hour-and-a-half running time; either way, it doesn’t work because it’s so full of clichés and crime movie tropes which you know off by heart at this point that it loses much of its impact as a result.

Set in east London, we follow Liam (Claflin) who’s just gotten out of prison and wants to find a way to put his criminal ways behind him and provide for his estranged girlfriend (Naomi Ackie) and their young son. Meanwhile, gangster turned wealthy property developer Clifford Cullen (Spall) holds a firm grasp on his power, with his high connections in government and the police force giving him a little bit of extra security. However, when Detective Beckett (Clarke) catches wind of a major corruption syndicate within the system, it leads to Liam being forced to do whatever it takes for him and his family to survive in a world where nobody can be trusted.

Put simply, you’ve seen all of this before, and I mean all of it; the ex-con trying to go straight, the corrupt cops, the power-hungry politicians – personified here by Bonneville’s character, an Etonian figure whose position in Parliament is never made abundantly clear – the seedy London criminal underbelly, you name it, it’s all here in one collection. The movie plays these clichés extremely straight, completely unaware that they’ve been used so many times in other movies, but it tries to compensate for its abundant lack of originality with an excessive amount of violence, which comes across more as though the writer was trying way too hard to set this one apart from their much lighter, fluffier fare. That’s not an exaggeration, by the way; Nick Moorcroft, the guy whose previous writing credits include feel-good crowd-pleasers like Finding Your Feet, both St. Trinian’s movies, and even Fisherman’s Friends from earlier this year, wrote the screenplay for The Corrupted, a movie that is so far removed from the tone of those other ones that it’s hilariously jarring. Seriously, it’s like if the guy who wrote Se7en also worked on episodes of Rugrats; you just can’t picture a guy best known for writing light, harmless material suddenly venturing into even more unpleasant and grimy cop thrillers such as this, and having seen the film it really does feel like Moorcroft go so sick of writing those types of movies that he decided to next work on something so different that the industry would have no choice but to take him seriously. Instead, he’s just written a crime script that’s as clichéd as they come, with all the violence feeling so unnecessary that it’s like an adolescent’s idea of what a grown-up crime thriller should be like.

The way it’s structured, how it’s acted, and even how it’s shot, it all feels like it was meant to be stretched out on a series of Line of Duty or Spooks or any other crime show currently on the airwaves; it doesn’t work as a film because it’s so clichéd and stale that you can’t get too invested in the drama it tries throwing at you, with lots of plot elements and entire character arcs either coming out of nowhere or feeling way too rushed. It’s just an instantly forgettable movie, more in line with EFD’s Overdrive than something like Status Update; it’s way too unoriginal to stand out on its own, and so needlessly violent that it becomes even more laughable when you look up the writer’s more recent credits. I still have no idea where this movie came from, nor why it’s in cinemas rather than on our television screens, but I don’t think it really would have mattered if it hadn’t been released at all; no matter what, I’m going to let it slip neatly into obscurity.

The Corrupted is a crime thriller that does every cliché in the book and plays them extremely straight, cramming in an entire series’ worth of material for a show like Line of Duty into a shortened running time that’s padded out with unnecessary violence, which is made more hilarious when you realise that writer Nick Moorcroft previously brought us films like Fisherman’s Friends and the St. Trinian’s films.

Check out The Corrupted showtimes in London
on Walloh.