The Conjuring: The Devil Made Me Do It (Review) – The Warrens’ Finest Hour? 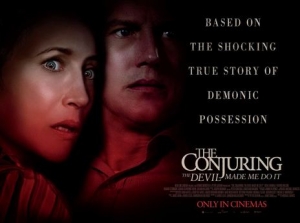 BASICALLY…: Ed and Lorraine Warren (Wilson and Farmiga) investigate a murder case where the defendant (O’Connor) claims he was forced to kill by demons…

Most horror series are centred around their scary antagonists, like Jason Voorhees or Michael Myers, but the Conjuring movies are very much driven by the characters who always confront such intimidating foes. Since their debut in director James Wan’s 2013 critical and box-office hit, Ed and Lorraine Warren – the fictional versions of the real-life paranormal investigator couple, as portrayed by Patrick Wilson and Vera Farmiga respectively – have become staples of the horror community, not just for their ability to face some of the most terrifying demons in modern genre history from creepy doll Annabelle or that evil nun Valak, but also for their genuine, heartfelt love and affection for each other which in a way makes the Conjuring movies a stealth romantic saga on top of all the scary stuff.

They are once more front and centre in the latest instalment in the Conjuring universe, this time with Michael Chaves (previously of forgettable entry The Curse of La Llorona) replacing a schedule-conflicted Wan in the director’s chair, although he firmly remains on-board as both producer and a contributor to the story. There is, as a result, slight trepidation when it comes to viewing The Conjuring: The Devil Made Me Do It, but very quickly Chaves negates any fears by turning in a solid horror sequel that’s effective, entertaining, and most of all chilling, if not quite as scary as some of the previous movies in this series.

We open in 1981, in the middle of what would be the climax to a more traditional Conjuring movie; a family has called upon the services of the Warrens to exorcise a demon from the body of a young boy (Julian Hilliard), which ends with said demon vacating the boy, but also with Wilson’s Ed Warren in hospital from a heart attack. Unfortunately, the demon appears to have found its way into the body of a young man named Arne Johnson (Ruairi O’Connor), who commits a brutal murder under its influence, and is subsequently imprisoned and awaiting trial. When he pleads “not guilty” under the pretence of being possessed by a demon, the Warrens are called in once again to help the defence prove Arne’s unusual claim, and they end up uncovering a sinister conspiracy involving Satanists, which puts them face-to-face with perhaps their most terrifying foe yet.

One of the things that really works about this film is the high level of stakes that it sets itself, and not just necessarily for the young man accused of murder. For practically the whole movie, you are seriously worried for both Ed and Lorraine Warren and their undying relationship, because Ed – as a result of his heart attack – is in a much more vulnerable position than ever before, walking around with a cane and having to take pills every so often or else face potentially fatal consequences. With all of the supernatural entities that they encounter, it seems like it’s only a matter of time before something finally does him in, and it’s a sign of both strong writing with these characters and also the sheer likeability of both Patrick Wilson and Vera Farmiga’s performances that you are left seriously concerned that this could be the movie that sadly forces these two apart forever; more so, one could argue, than the main threat that becomes known in this movie.

That threat, incidentally, is certainly creepy and extremely sinister, but it perhaps isn’t as immediately memorable as, say, the nun from The Conjuring 2, and the circumstances behind it seem far less plausible than some of the other demons in this series. It goes along with the overall scares in The Conjuring: The Devil Made Me Do It, many of which are definitely effective and bolstered by intimidating direction and cinematography – there are a couple of very well-done shots of corpses standing in the background, and perhaps the scariest use of Blondie’s “Call Me” in cinema history – but don’t always land because, unlike the previous movies, you’re not quite as invested in the main case and the family it’s happening to. The other Conjuring movies went out of their way to give these families a bunch of personalities and likeable traits that really made you root for them as well as against the evil presence that’s screwing with them, whereas here you barely know many of these people, or at least not enough to make you see why they’re important enough for the Warrens to help out; what we do get to know of them is good enough, but we get nowhere near as deep with these characters as before.

Of the three main Conjuring movies, The Devil Made Me Do It is probably the weakest, but that is not to say that this is in any way a bad movie; it does have some really good scares, a number of really strong sequences – one with Farmiga in the middle of the woods is creepily shot and acted – a compelling enough story, and of course some great moments between Ed and Lorraine Warren who, more than ever, you’re entirely rooting for. The only reason it ranks just below the other two movies is because the scares don’t have the same emotional impact as before, but even then it’s not like you’re utterly bored because the film constantly finds ways to leave you on edge, whether it’s a chilling shot or an intimidating villain, and The Conjuring: The Devil Made Me Do It certainly carries on the creepy spirit (no pun intended) of the series in compelling and entertaining enough fashion.

Wherever the series takes the Warrens next, hopefully there will be plenty more moments with this power couple to fully cement their horror icon status, because after all they’ve been through it’s the least we as a species could do for these characters.

The Conjuring: The Devil Made Me Do It is a solid continuation of the fictional exploits of Ed and Lorraine Warren, whose relationship easily carries this film which, while perhaps not as scary as previous entries, has some very effective moments that constantly leave you on edge.

The Conjuring: The Devil Made Me Do It is now showing in cinemas nationwide – find a screening near you right here!