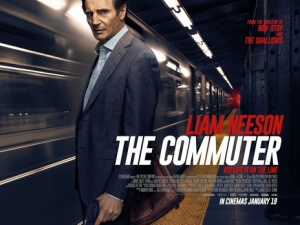 BASICALLY…: On his daily commute home from work, an insurance salesman (Neeson) is approached by a mysterious stranger (Farmiga) who forces him to complete an increasingly dangerous puzzle…

Ever since he first warned of his particular set of skills in Taken, Liam Neeson has experienced a mini-resurgence as a go-to action hero, and while it has led to some inferior projects (such as the Taken sequels) it has also led to a string of collaborations with director Jaume Collet-Serra including Unknown, Non-Stop and Run All Night, which are as pleasingly entertaining as they are immediately disposable once you’re done with them.

Their latest collaboration, The Commuter, doesn’t buck that trend in the slightest, but no matter how little it will stay with you afterwards, in the moment you’re still in for a thrilling and mostly satisfying journey that’s not boring but also gives you exactly what you’d expect out of a movie like this.

Neeson stars in this movie as Michael McCauley, a former NYPD detective who now works as an insurance salesman, and who regularly gets the train into New York City to get to work. One day, he is unceremoniously fired after ten years in the job, and on the train ride home he encounters a mysterious woman named Joanna (Vera Farmiga), who gives him a task to identify a passenger with a bag who goes by the alias of “Prin” in exchange for $100,000 in cash. Michael soon learns that he has become entrapped in a much larger conspiracy when the bodies start piling up and his family are apparently kidnapped, leaving him to solve Joanna’s puzzle to ensure his family’s safety, only to discover more and more how he may be the only person who can put an end to the scheme he is now a part of.

If you remember watching Non-Stop from a few years ago, then you’ll quickly recognise that this is almost the same movie as that was, only instead of being on a plane it’s on a train (and the way it’s going, the next one will be set on an automobile). It’s clear that a formula has been concocted for the perfect throwaway Liam Neeson action-thriller, and as silly and ridiculous as it can get you can’t deny that these kind of films always have an intriguing set-up that this director and star combo always manages to make work. Collet-Serra is a competent filmmaker who has a certain style he brings to his films that makes even the most standard tried-and-tested formula such as this pop out of the screen, through ambitious editing and a steady pace that gets larger and larger as the film goes along, sometimes to a preposterously enormous size. Neeson, having now settled neatly into this kind of role, is also a strong enough actor to sell even the most nonsensical plot developments, and as many as there are in this movie he is taking it incredibly seriously, which helps to reinforce how good an actor he can be that he can make all of this sound plausible without it coming across as sketchy dialogue. There’s a reason that this director and actor have made a grand total of four films together now, and that’s because no matter how silly or implausible as some of these plots may be, they have found a way to deliver exactly the right amount of escapism for audiences to have a good deal of fun with, through their combined directing and acting skills that give these kind of throwaway movies a bit more pomp and circumstance than they usually receive.

That being said, The Commuter is still a very silly movie, one that gets more and more ridiculous as it goes along, to a point where – pun intended – it seriously goes off the rails (and before you get mad about spoilers, that part is all over the trailers for this film). As Neeson’s character is going through carriage after carriage trying to find out which passenger is the one that Farmiga wants him to single out, many red-herrings make themselves heard from an obnoxious stockbroker – to whom Neeson drops the film’s sole F-bomb in an awkward piece of writing that feels very much like the writer himself was screwed over by Wall Street types and used this screenplay as his way to get back at them – to a sullen punk teenager played by Lady Macbeth’s Florence Pugh. When the real passenger does make themselves known, it’s a bit of a let-down seeing how this movie has gone out of its way to establish several more interesting characters only to have this one come almost out of nowhere after contributing nearly nothing to everything beforehand. But once the movie reaches its third act, all further sense of logic goes out the window, with the inclusion of a heavily-cartoonish action sequence that involves an exploding train carriage (because of course an action-thriller like this has to have an explosion in there somewhere), and a conspiracy that involves a corrupt police force that takes full domination of the final few scenes, all of which not only feel out of place for a set-up that could have worked perfectly on its own, but also tend to drag the film out longer than it needs to, with the natural ending point only paving way for a much more unnecessary bit of thrills.

It’s completely ridiculous and doesn’t make a whole lot of sense, but you kind of expect that out of a Neeson/Collet-Serra movie by now, and The Commuter is just the latest in a long line of disposable action-thrillers from the two that you may end up forgetting about in the long-term, but in the moment you find yourself transported to a world where logic need not apply and, against the formulaic odds, you have one hell of a time fitting yourself in to all of this nonsense.

The Commuter is the latest in a long line of amusing action-thriller collaborations between star Liam Neeson and director Jaume Collet-Serra, and while this one doesn’t buck the trend of being an entertaining but entirely disposable movie, the talents of both the director and his star are evident enough that it works as an escapist piece of cinema, regardless of the fact that it gets sillier and sillier as it goes along before it literally goes off the rails in its preposterous third act.