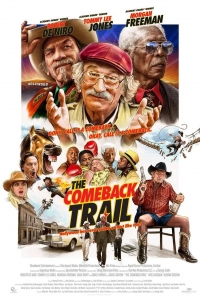 BASICALLY…: A desperate film producer (De Niro) makes a Western designed to kill the lead actor so he can pocket the insurance money…

One of the biggest unintentional laughs I’ve had at a movie so far this year comes from the opening credits of director George Gallo’s absolute stinker Vanquish; during a newspaper montage, one of the sub-headers details how Gallo’s other 2021 film, a remake of director Harry Hurwitz’s zany satirical comedy The Comeback Trail, has apparently swept the Academy Awards in this universe, earning multiple Oscars for Gallo. It’s a stroking of ego that is so blatant that you can’t help but laugh at how ridiculous it is, and it also shows an enormous amount of confidence in a film that, needless to say, isn’t going to win any major awards in the near future.

Although, having seen both of Gallo’s films, The Comeback Trail might as well be the next big Oscar contender next to Vanquish, which is still one of the year’s worst films so far. By no means is it great, nor is it even that good, but there is at least a hell of a lot more passion and energy put into this, which by turn makes it the far more watchable George Gallo-directed movie of 2021.

As mentioned, the film is a remake of the 1982 comedy by director Harry Hurtwitz, which itself takes some inspiration from the classic Mel Brooks comedy The Producers, only here instead of creating the ultimate flop for a big pay-day, the main scheme here is a bit more, well, fatal. Set in the late 70s, Hollywood producer Max (Robert De Niro) is in dire financial circumstances, having just made a controversial Nunsploitation movie that’s flopped with both critics and audiences, and is heavily in debt to thuggish financier Reggie Fontaine (Morgan Freeman, looking so much more awake and energised than he did at any point in the other recent Gallo film). After a visit to a movie set with his business partner and nephew Walter (Zach Braff) ends in tragedy, inspiration suddenly hits Max; if he produces a new movie where the main actor is killed on-set, then he can pocket the insurance money and pay off Fontaine for good. Max quickly assembles a Western production and hires aging, suicidal cowboy actor Duke Montana (Tommy Lee Jones) for the lead part, but quickly finds out that killing his star is going to be a lot harder than he thought, especially when the actor suddenly gains a new lease on life during filming, and that the resulting film may be the best of Max’s entire career.

Right away, you can tell that Gallo was far more invested in this project than he was in Vanquish, because just about everything from the performances to the editing to the overall quality of filmmaking has a considerable amount of effort put into them, whereas on the other film you could tell that pretty much everyone involved was probably sleepwalking their way through it. It isn’t a rare occurrence for a filmmaker to put out two films of varying quality mere months or even weeks apart (in 2018, director Scott Speer released Status Update – aka The Worst Movie of 2018 – and the forgettable but infinitely more tolerable Bella Thorne drama Midnight Sun within the span of two months), but almost always it’s easy to figure out which one they poured more of their soul into. The same can be said for Gallo and The Comeback Trail, which is much more within the Midnight Run writer’s wheelhouse, with its rather zany and at times amusing style of screwball comedy, while also making good comedic use of its gifted actors.

The main problem with the movie, though, is that it just isn’t all that funny. You can definitely see what they’re trying to do here, with its heavy satire of the Hollywood system and the unlawful business practises conducted behind the scenes, but it’s nothing you haven’t seen before when it comes to sending up Tinseltown, and the similar premise does make you want to watch much funnier movies like The Producers, which did this story of plot in much smarter ways. This is the kind of comedy that will have actors like Robert De Niro get kicked by horses, run over by bulls and caught in a massive explosion, all of which ends up surviving (no wonder why De Niro can’t seem to kill Tommy Lee Jones in this universe; apparently, it’s tricky to die under any circumstances). Some of the humour lands, but more often it doesn’t, and it’s a shame because it really could have been a lot funnier had the script been tighter and a little more intelligent with some of its biggest comedic moments.

Still, as mediocre and middle-of-the-road as The Comeback Trail may be, it’s still the far better George Gallo option than watching Morgan Freeman sitting in a chair for ninety minutes watching an emotionless Ruby Rose do things for ninety minutes. Seriously, Vanquish is the best friend this movie could have asked for, because by comparison this one actually feels like a movie.

The Comeback Trail is a pedestrian satirical comedy that hits plenty of familiar notes when it comes to poking fun at the Hollywood system, but it’s a marked improvement over director George Gallo’s previous film, the wildly inferior Vanquish.

The Comeback Trail is now available on Sky Cinema and NOW TV.