The Columnist (Review) – A Different Kind Of Troll Hunter 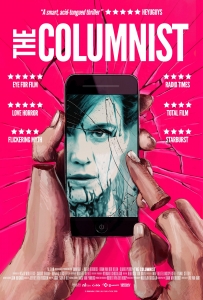 BASICALLY…: A  journalist (Herbers) goes on a personal mission to find her anonymous online trolls and give them their bloody comeuppance…

“Don’t read the comments,” a worthwhile piece of advice given at one point during director Ivo van Aart’s pitch-black satire The Columnist. As anyone who has even been online already knows, there are always going to be haters who share nasty messages about your work or against your own character, and it’s almost always some low-life who’s got nothing better to do than to sit behind a keyboard and post any horrible thing they can think of on social media, regardless of who or what is being attacked.

A simple solution is to, indeed, never read the comments in the first place. But this film’s character takes a few crucial further steps beyond that, and it amounts to something wickedly satisfying, a B-movie with a clear message and darkly funny approach that is well-paced, well-acted, and most importantly well-executed.

The Dutch thriller introduces us to the columnist of the title, Femke Boot (Katja Herbers), as she’s in the midst of a barrage of spiteful, sexist comments on Twitter, Facebook, and the newspaper she regularly contributes to. Worse still, she’s suffering from writer’s block with a strict deadline on her new book, and can’t even concentrate because of her noisy neighbour, as well as her commitments to her teenage daughter Anna (Claire Porro). One day, Femke decides that she’s finally had more than enough, and begins to enact bloody retribution against her faceless trolls by brutally murdering them and slicing off their middle fingers to keep as trophies in her freezer amongst the peas. Even though her writing and overall metabolism seems to improve, even beginning a relationship with fellow writer Steven (Bram van der Kelen), Femke’s insatiable habits begin to cause friction in her private life, which leads to some shocking end results.

Given how we in the UK still have yet to officially see Promising Young Woman, another film about a female anti-hero who fights against the toxic status quo (lead actress Katja Herbers even looks a little like Carey Mulligan), The Columnist feels like a sweet little appetiser before we get to experience the main course. It is a devilish dish in and of itself, though, with its razor-sharp satire targeting not just the reprehensible nature of online trolls but also their ultimate lack of consequences. Nobody else in the film aside from our murderous lead takes any of the anonymous threats and ill-wishing seriously, with even the police rolling their eyes when she tries to file a report when the messages start getting more explicit, and so when Femke finally does decide to go on her killing spree, it comes with surprising relief because it’s the closest anyone in this universe has come yet to dealing with the problem, rather than letting it fester without so much as a slap on the wrist. The film raises strong points about the notion of free speech and how anyone has the authority to say anything, no matter how mean-spirited it may be, but what many don’t seem to realise is that just because you CAN say anything doesn’t mean that you SHOULD, and the movie gets that message about just being a good and mindful person across with a considerate pace, which just happens to involves quite a lot of murder.

It’s a testament to both the writing – provided by Daan Windhorst – and Katja Herbers’ lead performance that you remain firmly on this character’s side, even as she continues to do things that you could argue are way worse that the mere messages people leave for her to doom-scroll through. Windhorst’s script taps into the lead character’s psyche thoroughly enough for you to understand why she makes the initial decision to go full D-Fens from Falling Down, and also raises some key societal issues which subconsciously paint the opposite sex in a more favourable light even when it isn’t really the case (upon finding Femke’s bag of bloodied murder tools in the shed, her daughter Anna immediately suspects her mother’s intimidating but ultimately innocent boyfriend). Meanwhile, Herbers is utterly captivating in a role where she takes full pleasure in committing some rather grisly kills, all with an underlying sense of psychopathic glee as she clearly enjoys taking the lives of those who have decided to verbally abuse her on Twitter, but still retains a little bit of her humanity to make her a character you’re morbidly enjoying to watch.

Ultimately, though, Femke is neither hero nor villain, but merely a devastating result of being pushed too far over the edge by people who, again, have nothing better to do than to write nasty comments to people for the mere crime of expressing opinions that they do not agree with. I personally know how it feels to have people I’ve never even met nor have any intention of meeting write some hurtful things about my work online, or sometimes straight to my face, and while it’s certainly devastating to read in the moment, I’ve since learned never to internalise it, cast it aside as nothing more than a troll looking for attention, and just carry on with my day. Not everyone is so fortunate to adopt this approach when it comes to online harassment, and hopefully they don’t do what Femke does and straight up murder people as a direct response, but it’s important for anyone who has a following on social media to remember that your opinions and statements have just as much a right to be heard as anyone else, and nobody that hides behind a laptop in their parents’ basement should ever take that away from you.

Both a devilishly entertaining comedy-horror and a sharply-told cautionary tale about the dangers of online trolling, The Columnist has plenty to say without overstaying its welcome (at just under 90 minutes, it’s a quick sit) and has plenty of bloody fun telling it.

The Columnist is a razor-sharp satire about the dangers and lack of consequences that surround online trolling, told in devilishly entertaining and often gory fashion where the kills are satisfying, the messages well-executed, and the lead performance by Katja Herbers compelling enough to keep you on her side even in the grisliest of moments.

The Columnist is out now to rent or buy on digital platforms, including Amazon Prime Video.