The Colour Room (Review) – One For Pottery Fanatics Only 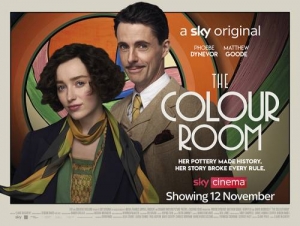 Pottery is a niche form of art, one that takes real skill and brawn to create, but is extraordinarily difficult to entice people outside of a certain appreciative circle. A movie about pottery, however, is arguably an even tougher sell: how can filmmakers get audiences to sit down for nearly two hours and watch a film about an artform that, truth be told, isn’t entirely interesting to the general population? It isn’t easy, to say the least.

Nonetheless, that’s the gamble that the makers of The Colour Room have taken, and in a way it is very much like learning about pottery: your interest is piqued during the first initial moments, but as the lesson drones on you start to lose focus and begin thinking about literally anything else you could be doing with your time. In the end, it’s not like you had a bad time with it, but the experience is going to leave your memory all too fast.

The film follows the story of Clarice Cliff (Bridgerton star Phoebe Dynevor, making her feature debut here), a young woman and aspiring ceramics artist who goes to work at the A.J. Wilkinson pottery factory in the 1920s. Under the watchful eye of the factory’s wealthy owner Colley Shorter (Matthew Goode), Clarice manages to work her way up as a modeller, and later starts experimenting with her own ideas which, of course, would become the very works that she would be remembered for.

That simply isn’t spicy enough for a dramatic structure, so firm focus is also given to the blossoming relationship between Cliff and Colley – who would later go on to be married – as well as on Cliff’s home life, living with her doting mother (Kerry Fox) and waifish sister Dorothy (Darci Shaw), and naturally a female empowerment arc that sees Cliff and her fellow ladies stun and shock the men in charge with their forward way of thinking. Only fragments of these, however, are only fleetingly interesting in a script that sticks closely to familiar biopic conventions, and keeps things so safe that the mildest of raised voices feels like a taboo moment. Everything from the plot to the characters is standard-issue, never reaching out to be anything grander than it’s been told to be, which for a subject that not many people may find all that engrossing anyway might be the most appropriate treatment.

This is the kind of film that you can play with your phone during while it plays in the background; every now and then you’ll look up to see what sorts of things are happening, and then it’s right back to scrolling through your e-mails. That may sound unfair, but there isn’t much going on to make the audience care enough about what’s happening, nor are they any sudden developments which suddenly flip everything on its head, but instead it is a movie that knows all too well what it is, and so does the viewer who has seen this kind of movie many times over. Aside from some of the performances – Phoebe Dynevor does fine for her first major film role, and Matthew Goode is clearly having however much fun he can from such a standard script – The Colour Room isn’t intriguing or engrossing enough for most viewers, outside of pure pottery aficionados, to really get sucked into.

There’s not much else to say about The Colour Room, for it is pretty much exactly the kind of straightforward art biopic you may think it’s going to be before watching it; nothing more, nothing less. Again, it may be viewed differently by people more familiar with this artist and her work, but for the average movie-goer who knows next to nought about pottery, or even has the slightest bit of interest in it, this is a movie you can feel okay about flicking through Facebook during.

The Colour Room is a standard art biopic that goes through the usual motions without straying too far from the path, for a story and subject which, try as they might to make it interesting and dramatically juicy, simply isn’t engrossing enough to entice non-pottery fanatics.

The Colour Room is now available to stream on Sky Cinema and NOW TV.