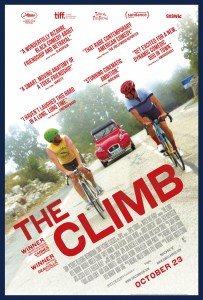 Buddy comedies are a dime a dozen, from Planes, Trains and Automobiles to Green Book, but perhaps rarer is the kind that’s about two people who, when you break down their friendship, should never have been buddies in the first place. Sure, most of them often start out with two polar opposites eventually warming to each other over the course of the movie, but The Climb makes it very clear that its own central pairing is one that causes more harm than good, and that these two people are far better off without each other – yet, for everything that’s wrong about them being together, they still attract one another like magnets.

Directed by Michael Angelo Covino, who co-wrote the script with Kyle Marvin, the film – based on the pair’s short film of the same name – stars both of them as Mike and Kyle respectively, two lifelong friends who we first meet cycling together on a long hilly road somewhere in France. It’s here where Mike abruptly drops the news that he’s been sleeping with Kyle’s fiancé, which of course upsets Kyle a great deal and causes him to break off their friendship. The rest of the film is made up of a series of vignettes showing their lives over the next few years, from hostile funerals to awkward Thanksgiving and Christmas get-togethers to skiing trips to bachelor parties and so on, where Mike and Kyle both bond and un-bond over this period as it becomes painfully obvious to us, the audience, that this is a friendship made up of fragile egos and increasingly misplaced trust, especially when it comes to Kyle’s new fiancé, his old high-school sweetheart Marissa (Gayle Rankin).

Reminiscent of last year’s indie breakout Thunder Road, which similarly saw its director and writer Jim Cummings take on a starring role, The Climb is an escalating collection of insecurities that are piling on because neither of these two guys are willing to let each other go. To Kyle, Mike is a Class A drug; a pathetic, self-serving and obnoxious presence who’s clearly a bad influence on the co-lead that’s otherwise trying to keep things level-headed, but whether it’s his good nature or his blind loyalty to the friend he’s known the longest, Kyle can’t help coming back to Mike over and over again, even when it’s clear that he is the root of many of his problems. On the flipside, Mike sees Kyle as someone who acts as a beacon of light in his dark and dreary world, which is full of self-loathing and remorse for all the terrible things he has done to not just Kyle but virtually everyone else around him, and clearly wants to look out for his best buddy but keeps letting his self-sabotaging approach get in the way. The script paints both of them as lost souls who paradoxically need each other but also should be as far away from each other as possible, and it is smart enough to not put either of them in the righteous corner since they both have their equal share of bad habits that for anyone else would be a deal-breaker. It takes this rather toxic friendship and puts it under a microscope for us to look into, examining why this friendship exists despite everything going against it, and what we find is often darkly funny but also, in its own twisted way, kind of sweet-natured.

For his filmmaking style, Covino is clearly inspired by the eccentricities of French experimental cinema, going so far as to open with a section set somewhere in the French countryside, and at one point a character even goes to watch a French retrospective at the local cinema, but he also incorporates a lot of his own ambitious camera and editing tricks to make the film and its many parts flow naturally from one to the next. Many of the scenes are impressively done in Birdman-style one-take shots, with takes stitched together to resemble a real-time effect (although the cuts are perhaps a little more noticeable here than in, say, 1917), which invites you to observe these defining moments in the two leads’ friendship like a floating omniscient presence, invisible to the rest of the world but no less focused on how every single person in the scene is reacting to one unflattering encounter after another. Covino also finds the time to incorporate some of his own eccentricities, such as a Greek chorus of construction workers or musicians coming in to deliver an out-of-nowhere musical piece to the audience after a couple of major scenes involving the two protagonists, serving as mood-breakers that provide light relief following some heavy drama. You can tell that this is a film made by a director with ambition and passion for his project, and Covino has a strong vision in mind for his miniscule tale of two guys that borders on Greek tragedy half the time.

A brutally honest and often darkly funny tale of two people who bring out the best and worst in each other, The Climb is an amusing breakdown of the buddy comedy that very few of the more mainstream examples have dared to explore; an anti-buddy comedy, if you will.

The Climb is a fascinating and often darkly funny autopsy of a toxic friendship, one that’s made up of two fragile egos who bring out both the best and worst in each other despite their clear respect and devotion to each other, which director Michael Angelo Covino and co-writer Kyle Marvin – both also in starring roles here – explore with brutal honesty and smart analysis.

The Climb is out now in cinemas across the UK.