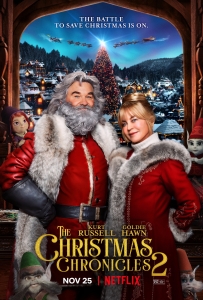 The most memorable thing about the first Christmas Chronicles movie was by far the casting of Kurt Russell as Santa Claus. His infectious energy and utterly cool charisma brought oodles of life to what was otherwise a pretty standard Christmas movie, so it makes sense to not only boost his role even greater for the sequel, but to also bring in Russell’s real-life partner Goldie Hawn as Mrs. Claus (especially after she made a brief cameo appearance at the end of the first film), in yet another piece of genius casting that simply feels right.

It shouldn’t come as a shock that both Russell and Hawn are the best part of The Christmas Chronicles 2, but the film itself is a step up from before, incorporating a lot more fantasy and mythos surrounding the Santa Claus legend, and feeling much more like an epic family film that genuinely feels like something parents and their children can all watch together around the festive season. You can probably pin that on the change in director – Chris Columbus, of Home Alone, Mrs. Doubtfire and the first two Harry Potter films, takes over from Clay Kaytis and even shares a co-writing credit with original screenwriter Matt Lieberman – but when you have both Russell and Hawn on-screen together as the champions of Christmas, it’s always going to be awesome.

The film is set a couple of years after the first, when we meet back up with young Katie (Darby Camp), a “true believer” in the Christmas spirit whose love for the holidays has been dampened somewhat by her mother’s (Kimberly Williams-Paisley) new relationship with a guy named Bob (Tyrese Gibson, who hilariously feels out of place in this Christmas family movie), who has whisked the family away to Cancun for Christmas. Katie’s decision to run away back home leads to both her and Bob’s young son Jack (Jahzir Bruno) being transported to the North Pole, where they run into Santa (Russell) and Mrs. Claus (Hawn) who, along with their hordes of elves, are hard at work for the big day. However, the fun is threatened by Belsnickel (Julian Dennison), a vengeful former elf who wants to ruin Christmas forever, but not if both Santa and Mrs. Claus, along with Katie and Jack, can stop him before it’s too late.

With Russell and Hawn sharing such great chemistry with each other and having some pretty great moments to shine on their own terms, it’s almost frustrating that we have to keep cutting back to the kid characters who, while not overly annoying, certainly don’t leave as big a mark as the main attraction. At first, you’re not really all that sympathetic with Katie and her misery, because half the time she comes across as bratty and moany despite the fact she and her family are in the sunny and luxurious beach landscapes of Cancun for Christmas, but she does get more tolerable as the film goes along; the same goes with Jahzir Bruno as Jack, who starts off as one of those stock kid characters who’s apparently afraid of everything until he discovers otherwise, but he never gets as annoying as he could have been (and between this and Bruno’s other major movie recently, The Witches, this is the better movie).

Honestly, though, the movie would have worked fine if the kid characters weren’t written into the story, because there are things here that are far more interesting to explore when it comes to the actual lore of Christmas. We briefly see the origins of Santa as a priest in Turkey, including his meeting with the elves and him being tasked with leading them to a new home, and it’s so captivating and taken so seriously that it leaves you wanting to see a prequel movie about just that aspect of the story. There are also some cool visuals such as the various shops in Santa’s – or should that be Mrs. Claus’s? – village which include LEGO statues and video game factories, as well as some fun set-pieces such as a musical number set in a Boston airport in 1990 (it’s a long story about how they end up there). You also get to see a giant ferocious winter cat, a beam of light from a star, some weird genetic splicing of jackals and coyotes, and even exploding gingerbread men; all of it is extremely entertaining to behold, and the film fully embraces its fantastical world with plenty of time to go through all of it, while also remaining rather loveable and full of festive joy (and that’s just from both Russell and Hawn alone).

Certain other elements don’t quite hit the mark, such as Julian Dennison’s villain who mostly comes across as a two-dimensional bad guy with petty reasons for turning bad in the first place, and there is also a lot of exposition dumps to get through during the first half – although a lot of it is being delivered by either Kurt Russell or Goldie Hawn, who do it in such a meaningful way it’s enough to almost forgive the frequent information. Nonetheless, it’s a noticeably more entertaining and intriguing movie than the first, which felt like it was going through the motions of a typical Christmas movie and didn’t have much else to offer outside of Kurt Russell as Santa Claus. This one, however, steps up its own game with lots more Christmas magic on display, plenty of things for both adults and children to enjoy, and an infectious feeling of fun and happiness as the most wonderful time of the year draws ever closer.

The Christmas Chronicles 2 is a sequel that steps up its game following the so-so first entry, incorporating not just a lot more fun and genuine intrigue around the Christmas legend, but also a lot of Kurt Russell and Goldie Hawn as Santa and Mrs. Claus respectively, who conjointly bring tons of infectious energy and awesomeness to an epic family adventure that’s entertaining and highly watchable.

The Christmas Chronicles 2 is now available on Netflix.