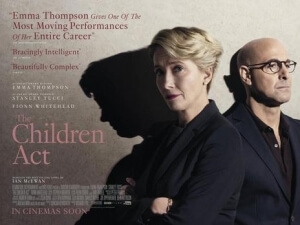 BASICALLY…: A judge (Thompson) must make a decision in a case that could save a young man’s life, while also dealing with her strained marriage at home…

To call someone a “national treasure” is such a cliché nowadays, that it’s of little wonder why celebrated thespians like Judi Dench are so sick of hearing it whenever someone is describing their long body of work over the years. It’s not a phrase I use very often myself, mostly because it’s the tacky and predictable thing to do,  but also because it’s been said so many times about various different people that it has lost any sense of true value.

But by God, is Emma Thompson a national treasure.

Thompson is one of those actresses who, no matter what kind of role you cast her in, and regardless of whether the movie she’s in is good or bad, always goes for it like she’s out to win an Oscar, and even in parts where she’s all but wasted she ends up being one of the best – if not the best – thing about that movie in particular. Off-screen, the recently-appointed Dame has proven herself to be a formidable, intelligent and gleefully unfiltered personality that’s hard to hate, showing that there is a great and noble soul behind her extraordinary talent.

She is now at the forefront of the captivating new drama The Children Act, where she is once again absolutely magnificent in a part that’s practically written for her, and is blessed by the fact that the material she’s working with is actually quite good, which gives not just her but the rest of the cast enough meat to chew on.

Thompson plays Fiona, a High Court judge whose work life has vastly overtaken her personal life, at the expense of her failing marriage to charming American Jack (Stanley Tucci), who announces to her that he desires to have an affair to counteract their lost intimacy. One of the cases that Fiona is assigned is that of a young man named Adam (Dunkirk’s Fionn Whitehead), who is in hospital suffering from leukaemia and is in desperate need of a blood transfusion – however, Adam and his family are Jehovah’s Witnesses, and as part of their religion they refuse to accept blood from another source as they fear it taints the person’s purity in the eyes of the Lord. Because Adam is just a few months shy of his 18th birthday, he is still technically a child, so Fiona then makes the unconventional decision to visit Adam himself in the hospital to see what he thinks, and she ends up making a decision that proves to have some unexpected consequences in the long-term.

It’s at once a riveting legal drama, as the situation and arguments heard for and against the claim are fascinating enough to make you interested in how it’s going to be resolved, and also a captivating and emotional character piece that really plays with the emotions and desire for love that each of the main ensemble faces. Thompson, needless to say, is on top form as someone who already we understand has adopted a rather cold and unfeeling attitude – in an early ruling, she declares herself to represent “a court of law, not morals”, and her life has become a living representation of that, to a point where her own husband has begun to consider having extra-marital relationships due to the constant neglect he faces from his wife. The arc her character takes is that of learning to become a human being again instead of a robotic and cold-hearted servant of the law, and Thompson goes through all the emotions that unearth a person with compassion underneath her hardened exterior, which greatly comes into play during the film’s extremely emotional climax where the acting skills of both her and an ever-excellent Tucci, as well as young Whitehead who has the makings of a fine actor indeed, come into full force. This is an exceptionally acted film, in case that point wasn’t already made quite clear, with the performances here being some of the strongest they have done in quite some time.

Ian McEwan wrote the script for this film, adapting from his own book of the same name, and between this and the last film he wrote the screenplay for, that being On Chesil Beach, this feels like the more complete and sturdier movie. The writing is particularly strong here as it handles the various subject matters with intelligence and due consideration, like you’re watching a debate between people who actually know what they’re talking about, but it also gives the story and characters a lot more depth and weight than you would probably think, especially as it ventures into the second half of the movie where it takes some interesting turns that the trailers don’t even hint at. Director Richard Eyre carefully allows the drama and tension to build, particularly in scenes where it’s apparent that Thompson and Tucci’s marriage is all but doomed, and when the film does reach its crescendo it’s powerful enough – not to mention beautifully acted – to stir a good emotion or two because you’re invested in this story and these characters and want to see things work out as well as they can for all of them.

There are a couple of things that prevent it from being a wholly worthwhile cinematic experience, from scenes and shots that do feel like it’s more of a filmed stage play than an actual movie, to a rather abrupt conclusion following a very emotional climax, but the performances are so strong and the writing so intelligently laid out for its audience that The Children Act is at the very least worthy of a recommendation, if only so that we can all see that Emma Thompson is – yes – a national treasure.

The Children Act is an emotionally engaging and intelligently written legal drama, which is also phenomenally acted by the ever-excellent Emma Thompson and Stanley Tucci whose performances really do carry this movie.