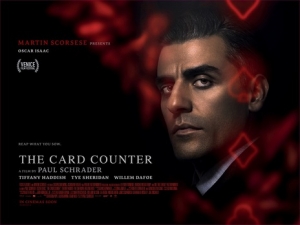 BASICALLY…: A professional gambler (Isaac) sees a shot at redemption when he comes across a vengeful young man (Sheridan)…

Despite a long career that’s seen him write the scripts for no fewer than four classic Martin Scorsese movies (including Taxi Driver, Raging Bull, The Last Temptation of Christ and Bringing Out the Dead), Paul Schrader only recently earned his first Oscar nomination for his writer-director outing First Reformed. Now that he’s finally broken that barrier, perhaps the Academy will be more inclined to consider his scripts in the future, starting with The Card Counter which is a taut character piece reminiscent of dark, moody dramas from the 1950s, but with Schrader’s own unique touch.

Oscar Isaac stars as a man named William Tell, a professional gambler with a strong knack for counting cards, and a tight philosophy to only win modest amounts at casinos in order to avoid attention. Naturally, he has a dark past: Tell was a negotiation officer during his time as a soldier, and has just served eight years in military prison after evidence of him torturing prisoners under the orders of his superior Major John Gordo (Willem Dafoe) managed to surface. A chance encounter with Gordo at a convention inside one of the casinos also leads Tell to Cirk (Tye Sheridan), a young man whose family life was destroyed indirectly by Gordo’s sadistic practises, and now wants revenge against the retired Major. Sensing a shot at personal redemption, Tell brings Cirk with him on a gambling tour across the country, where he and friendly gambling investor La Linda (Tiffany Haddish) try to give Cirk a nudge in the right, and less murderous, direction.

The Card Counter certainly feels like Schrader is reaching back towards the kinds of anti-heroes he helped create with Scorsese (who is credited as an executive producer on this film), and Oscar Isaac’s William Tell is a fine addition to that roster. Isaac’s performance is very subtle here, clearly bottling in a lot of repressed anger and frustration which makes the mysterious character all the more intimidating and even terrifying when we finally do get to see him drop his poker face. The actor does great with keeping a lot of his character’s secrets close to his chest, like he’s playing a permanent poker game with each and every person he comes across, whether they’re familiar or complete strangers. Likewise, Schrader also consciously keeps an arm’s distance between the character and the audience, revealing only fragments of his past one at a time – in an unusual quirk we see early on, Tell covers each and every item in motel rooms with sheets bound together with string, like he’s constructing a murder scene that never happens – but always giving you enough about the character to be interested in his journey and what he’s ultimately all about.

Viewers who enjoy playing a bit of poker themselves will perhaps get more out of the numerous scenes of such than those who have no idea how any of it works; I am not afraid to admit that I don’t know the first thing about poker, with all the rules and hands that Isaac’s Tell, erm, tells us via narration being like hearing a completely different language. That being said, there are fun things to get from these scenes, like a recurring minor character known as “Mr. USA” who dresses in full patriotic gear and gets his entourage to chant “USA! USA!” every time he wins. Honestly, I wish there was more of that guy in this movie, because although he is really just a minor character he often does threaten to steal scenes from even Oscar Isaac, though I do appreciate that he’s there just to personify the main character’s disdain for fame on the poker circuit. It’s also fun to listen to these characters just talk about the sport, and sometimes about particular games that they admire and even demonstrate, because even though you may not understand a word of what they’re saying, they’re still talking in a passionate enough manner that you can respect why they enjoy it so much.

The movie, however, does have some flaws. While the main character is interesting enough to hold your attention, and Oscar Isaac easily carries this movie, some of the other supporting players can’t even hold a candle to either of them; both Tiffany Haddish and Tye Sheridan do just fine in the movie, but neither of their characters nor performances are entirely strong enough to compliment the main protagonist and its captivating portrayal. Willem Dafoe is good as always, but he’s not given enough time in the movie to really be deemed as a formidable threat; it’s much more of an extended cameo than a fully-fledged villain role, which for Dafoe die-hards might be enough but seems like a slight misuse of such a great character actor, especially given that Dafoe has worked with Schrader numerous times before.

As a stoic character piece, The Card Counter is a strong effort with firm writing and a magnetic lead performance, but unlike First Reformed something tells me that Schrader is going to be waiting just a little while longer for his second (!) Oscar nomination. Maybe it’ll come if he decides to do a Mr. USA spin-off.

The Card Counter is an intriguing character study from writer-director Paul Schrader, and features a magnetic central turn by Oscar Isaac, who manages to outshine some of the other supporting players.

The Card Counter is now showing in cinemas nationwide – click here to find a screening near you!