The Call of the Wild (Review)

The Call of the Wild (Review) 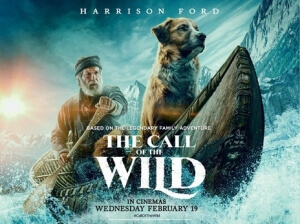 BASICALLY…: A domesticated dog named Buck is transported from his California home to the icy landscapes of the Yukon…

This is going to be an odd movie to talk about. On the one hand, there are several things worth discussing in regards to why and how it doesn’t fully work, yet on the other hand I can’t say that it is through and through a terrible movie. It definitely has its heart in the right place, but at the same time there are glaring issues that are extremely difficult to overlook.

Either way, The Call of the Wild is a film people should be talking about, for both the right reasons and the wrong reasons.

Based on the classic story by Jack London, the film follows a St. Bernard/Scotch Collie dog named Buck, who starts off as the domesticated and spoiled canine of a California town judge, but is soon kidnapped and sold off to freight haulers in the Yukon, where he begins to be trained as a sled dog. Eventually, he comes across an elderly man named John Thornton (Harrison Ford), and the two set off on an adventure into the wilderness that bonds both man and dog for life.

The one thing that people have been talking about with this film, though again not for the intended reasons, is the fact that Buck, the dog who serves as the main protagonist throughout the whole film, is an entirely CG creation. This has been derided by many for being completely unnecessary and distracting from the rest of the movie, and I really do have to agree; it makes the dog look like he’s just jumped straight out of a cartoon, and it always takes you out of the film because his movements and facial expressions never look natural, especially within a live-action setting and surrounded by very real human actors. The film is directed by Chris Sanders, who had previously co-directed Lilo and Stitch and the first How To Train Your Dragon movie with this being his live-action debut, and you can absolutely tell that this was made by someone who comes from an animation background, because he directs like this is an animated film, complete with exaggerated slapstick and larger-than-life performances (Dan Stevens, as a villainous fellow in search for gold, is especially hammy).

Some will try and argue that the reason Buck, along with all other animals in this movie, is all CGI is because he does things in this movie that would be impossible for a real dog to pull off, but if you’re just going to animate all of the animals then why not have the whole film be animated? After all, beyond the fact that the main character looks like a cartoon, it is shot, written, performed and stylised like it’s a piece of animation, like the kind of films that legendary animator Don Bluth would have made back in the day. If this film had been made in that sort of style, it would have made for a cracking throwback to the likes of An American Tail or The Secret of NIMH, when animated films would have taken on more daring themes and slightly darker tones; instead, it just looks like a run-of-the-mill live-action Disney remake, only if the original animated classic never existed.

But again, even though the CGI is extremely distracting, that does not mean that the overall film is bad; a couple of wrongs, no matter how sizeable, cannot and should not take away from whether the movie has strengths in the script, story, characters and overall filmmaking, and there are some genuine merits to this film’s craft. For one, it looks gorgeous; while the CGI doesn’t completely suck you into this world, you can at least appreciate the stunning views that have been captured here, from the luminous northern lights to the vast forests and wilderness, which all make for a visually appealing movie to look at. Michael Green’s script may simplify large chunks of the original story, but it gives the elements that remain a pleasant and grand weight that make it feel like a thematic throwback to the old-fashioned epics of the 50s or 60s. Of the human characters, many of whom don’t even register – Bradley Whitford and Karen Gillan, as Buck’s original owner and a travelling companion of Stevens’ villain respectively, are totally wasted in nothing roles – Ford lends gravitas to the film’s second half, even though he is also delivering narration that is about on par with his legendarily phoned-in narration for the original cut of Blade Runner.

I can also believe that the filmmakers went into this movie with good intentions; sure, it doesn’t feel like it’s in the right medium of film, but you can tell that there is effort being put into making this film look and feel as epic as it possibly can. There is enough heart and warmth to not leave it feeling like a cynical project, and it is a film that will certainly find an audience, whether it’s young children who can laugh at the CG dog’s antics, or the slightly older crowd who can appreciate a big-screen movie like this which simply isn’t made anymore. No matter what you may think of the decision to make the dog completely CGI, it’s hard to completely hate on this film because it does have ambition to it, even if some of the execution is a little misguided.

So like I said, this is a rather odd film to talk about, because there are just as many things to talk about that don’t work as there are things that do; for every unconvincing CGI dog there is a level of ambition that is hard to gloss over. I feel like they just about balance out enough to make it an interesting middle-of-the-road movie, but at the same time if the CGI really is a make-or-break element then I won’t be arguing against it any time soon.

The Call of the Wild has an admirably old-fashioned approach to the classic Jack London story, with clear amounts of effort and care put into the making of it, but the strange decision to make the lead character a completely CGI creation never fully convinces, except in the belief that this really should have been an animated film instead of live-action from the very beginning.

Want to decide what the movie’s like for yourself?
Check out The Call of the Wild showtimes in London
via