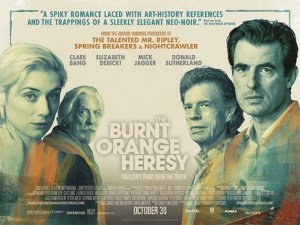 BASICALLY…: A disgraced art critic (Bang) is hired to steal a painting from a reclusive artist (Sutherland)…

The job of a critic is to analyse why a certain thing is or is not of an acceptable quality, but far too often cynicism can kick in and cloud the overall judgement one is supposed to make, resulting in an opinion that might not always be fair and balanced. I know that I’ve been guilty of this on more than one occasion, although I do often strive to give most films I review the benefit of the doubt, but to see something like that happen in the very movie I’m supposed to watching and writing a review on afterwards is rather odd, like a meta autopsy of the profession happening right in front of my very eyes.

However, while the deconstruction of the critic and their petty biases is a core theme of The Burnt Orange Heresy, it is mostly a film of two singular goals: to be a scathing critique of the art world and its pretentious figures, and a high-concept thriller in the same vein as Patricia Highsmith or Alfred Hitchcock. It works slightly better as one over the other, and it doesn’t take a critic to point out which is better, but it also does not stick out as something truly cinematic with its long-winded and far too smug attitude making it hard to properly care.

Our lead character is James Figueras (Claes Bang), a once-respected art critic who, after an embezzlement scandal, is now reduced to giving lectures to American tourists in Italy. At one of these lectures, he meets Berenice (Elizabeth Debicki) who takes a peculiar interest in James’ apparent passion for his work, and he soon invites her to accompany him to the luxurious home of art dealer Joseph Cassidy (Mick Jagger – yes, THAT Mick Jagger, in his first proper acting gig in 20 years), where the wealthy Cassidy makes a tempting offer to James: he will attempt to interview the famously reclusive artist  Jerome Debney (Donald Sutherland), and steal one of the famed artist’s paintings for a new exhibition, in exchange for a revitalised career in his field. As James wrestles with the morality of his mission and his unquenchable greed, he ends up making vital decisions which put everything in jeopardy.

Coming from Italian director Giuseppe Capotondi, better known for several music videos of artists like Keane, Natalie Imbruglia and Ms. Dynamite, the film could not look more European if it tried. Capotondi takes as much advantage of the luscious Italian atmosphere as he can, from the harbour views of swanky villas to the mysterious concrete slabs of the city, as does cinematographer David Ungaro who quite elegantly captures it all with a twinge of hazy if restrained beauty. You’ll appropriately get a whiff of The Talented Mr. Ripley or To Catch a Thief in this film’s style and tone, but The Burnt Orange Heresy is clearly a film that desperately wants to be both of those things yet doesn’t realise that it lacks the genuine suspense and tension that both Highsmith and Hitchcock were able to bring to their stories.

Instead, this often comes across as a smug and self-indulgent forgery of those styles, with a plot that features a number of twists and turns which can seem preposterous next to a more sophisticated thriller, characters who you find it hard to root for, and some surprisingly nasty directions which don’t feel entirely earned after long stretches of portentous dialogue that’s as though you’re listening to an audiobook instead of watching a movie. Unsurprisingly, this was based on a book – specifically the 1971 novel of the same name by Charles Willeford – and it seems that screenwriter Scott Smith (himself an author, having previously adapted his own novel A Simple Plan to the big screen) hasn’t been able to shake off his roots in prose for a script that relies heavily on dialogue instead of visual cues to tell this story, which can often be a mistake that most authors transitioning from the book to the screen can make (a recurring motif involving flies is perhaps the closest the film comes to “show, don’t tell” territory). There could easily have been adjustments made to make this particular story work in a cinematic environment, from cutting down on the expository dialogue to letting the actors use more of their subtle emotions tell us everything we need to know about them, but instead you get a pretty yet pretty empty adaptation that’s perhaps best left for the page.

It isn’t necessarily the fault of the actors, who do reasonably well despite the vacuous material. Claes Bang and Elizabeth Debicki share an interesting chemistry, one that’s made up of smooth-talking seduction and misogynistic pet names like they’re acting in an erotic movie from the mid-90s; however, as the film goes along you realise that their characters bear little resemblance to reality, defined by their holier-than-thou attitudes and devilish turns later on in the movie which by that point seem inconsistent with the personas we were originally introduced to. Debicki’s character is particularly ill-defined, at first seeming like she’s being set up to be the film’s femme fatale, but instead reveals herself to be nothing more than decorative furniture to be placed alongside the rest of the gorgeous atmosphere, making her character in Tenet seem far more rounded and better defined by comparison. At least Mick Jagger is having fun in the precious few scenes he’s in, swimming in arrogance and veiled threats like the most laid-back Bond villain there ever was, and Donald Sutherland brings a much-needed poignancy and warmth to the otherwise rather cold plot happening around him.

The overall conclusion also gets a few points for ramping up the Hitchcockian suspense and ending on a couple of decently poetic surprises, but the journey to that point was noticeably bumpy, surrounded by dialogue and plot twists that think they’re much cleverer and deeper than they are, when in fact it’s a po-faced and rather uninviting display of smugness and portentousness that not many critics would be able to wrap their heads around.

The Burnt Orange Heresy is a smug and rather self-indulgent attempt to ape the styles and tones of Patricia Highsmith and Alfred Hitchcock, containing little of the suspense and intrigue their stories provided in a story that’s increasingly preposterous and not nearly as clever as it thinks it is.

The Burnt Orange Heresy is out in cinemas across the UK on Friday 30th October 2020.