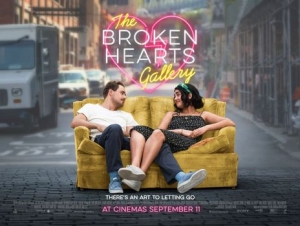 BASICALLY…: After a break-up, Lucy (Viswanathan) is inspired to create a gallery made up of trinkets from past relationships…

A new rom-com star is born in Geraldine Viswanathan. The Australian actress, previously of scene-stealing turns in Blockers and Bad Education (where she held her own opposite fellow Aussie Hugh Jackman), is incredibly apt at holding down the fort if her delightful turn in The Broken Hearts Gallery is anything to go by; she’s funny, she can carry a dramatic scene perfectly well, and most importantly she share chemistry with just about anyone she acts opposite of.

All perfect ingredients for a rom-com heroine, and the film itself is a charming, if not exactly surprising, movie that’s practically impossible to completely dislike.

Viswanathan plays Lucy, a young art gallery assistant who’s come and gone through a series of failed relationships, yet always manages to keep a little trinket from their time together, whether it’s a board game piece or an actual piece of trash. After her latest heartbreak, from self-serving gallery worker Max (Utkarsh Ambudkar) in a scenario that also sees her lose her job, she comes into contact with a guy named Nick (Dacre Montgomery) who’s renovating an abandoned YMCA into a hotel, and becomes inspired to display her many years’ worth of trinkets in her own art gallery, which she formally dubs “The Broken Heart Gallery”. The gallery soon goes viral, and suddenly many other people are donating their own items from previous relationships to display in the exhibit; all the while, Lucy and Nick inevitably find their own relationship starting to become something greater than they first realised.

The movie is pure-grade romantic-comedy with all the bells and whistles you’ve come to expect; this isn’t a subversive reworking of the usual clichés or anything like that, instead it’s an old-school example of the genre that does hit a lot of the familiar beats you’re used to. However, it’s all in the execution, and writer-director Natalie Krinsky – who remarkably has no other directing credit to her name, and was previously credited as a writer on shows like Gossip Girl and Red Band Society – brings an unparalleled amount of charm and vibrant charisma not seen since the likes of Emma Stone’s breakout movie Easy A. She injects so much life into her characters, who in any other movie would just simply be cardboard cut-outs but are given their own distinct personalities and legitimately amusing scenarios; take Lucy’s friends as an example, played here by Molly Gordon and Philippa Soo, who have a very sweet connection to the main character, and provide some genuine laughs that propel them far ahead of the standard “best friend” roles in typical rom-coms. Krinsky appears to have found a fair balance between indulging in the usual tropes but also doing something heartfelt and uncynical with them, in a script which is packed full of laughs and sweetness, and lively direction which recalls the first few years of Sex and the City.

The two leads both have a very strong chemistry with each other, with both Geraldine Viswanathan and Dacre Montgomery – both Australian actors, incidentally, which honestly did shock me when I read that after seeing this – each being given plenty of material to shine either together or individually, certainly enough to make you want to root for them as a romantic couple. Both have proven themselves to be versatile actors, with Montgomery alternating between roles like this, his intimidating turn on Stranger Things, and leading the Power Rangers in the 2017 big-screen reboot, and Viswanathan especially having plenty of talent to spare both as a comedic performer and a dramatic actress in films like Blockers and Hala, and here they use all of their acquired skills thus far to deliver a believable pair of characters who you could picture existing in today’s society, in what have to be star-making turns if there’s any justice left in 2020.

Inherently likeable though it may be, I can easily see this film turning off anyone who wants a legitimate alternative to the typical rom-com, which they’re really not going to get here; it does go with many of the usual tropes you’d expect to find here, to a point where you think it’s gotten it all out of its system before then throwing another familiar beat into the works as it enters its third act. If you really can’t look past the familiarity of it, or if you’re just not into rom-coms in general, then I can’t see this winning you over in that sense; however, if you’re willing to overlook it and view it as the charming, likeable and warm-hearted comedy-drama that it is, then you’ll be rewarded with a film that’s funny, uplifting, and effortlessly pleasing to watch, either on your own or with your romantic partner – or even with the many trinkets you might have kept from your own past relationships.

The Broken Hearts Gallery might not rewrite the rom-com rulebook, but that doesn’t stop it from being a delightfully charming entry into the genre, with effortlessly likeable turns from Geraldine Viswanathan and Dacre Montgomery, and a strong heartfelt script and direction combo from first-time filmmaker Natalie Krinsky.

Want to decide what the movie’s like for yourself?
Check out The Broken Hearts Gallery showtimes in London
via