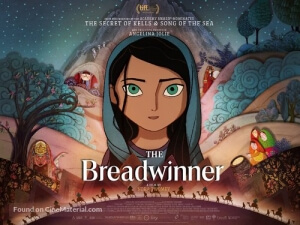 BASICALLY…: A young Afghan girl (Chaudry) is forced to disguise herself as a boy so she can provide for her family when her father (Badshah) is imprisoned by the Taliban…

As the animation competition largely remains just a CGI pissing contest between Disney, Pixar, DreamWorks, Illumination and Blue Sky (among others), there are other alternative studios out there that fans can rely on to remind them of how imaginative and visceral the art form can be. Cartoon Saloon, the Ireland-based studio responsible for critically-lauded films like The Secret of Kells and Song of the Sea, is one such animation company that preserves its traditional 2D animation and uses it to endless opportunities, from providing beautiful imagery on-screen to using it in order to tell a captivating story with fully-defined and identifiable characters.

Their latest film, The Breadwinner, is their most ambitious project to date, not just for its visual prowess but also in its delicate handling of a very tricky way of life in the world, which many other projects like it would struggle in finding an emotional balance, which is not a problem for this latest triumph of theirs.

The film is set in Kabul, Afghanistan, which is under the strict control of the Taliban. A young girl named Parvana (Saara Chaudry) lives at home with her family, including her mother (Laara Sadiq), her older sister (Shaista Latif), her infant brother, and her one-legged father (Ali Badshah). One day, the latter is suddenly arrested and imprisoned by the Taliban, leaving the family helpless since none of the women can go outside alone. Desperate to help her family, Parvana makes the radical decision to cut her hair and disguise herself as a boy, which ends up working and leaves her able to venture out and keep her family afloat, all the while seeing what she can do to save her father from his unjust imprisonment.

Throughout the film, segments are interjected from a story that Parvana is telling her younger brother, and sometimes other characters too, about a young boy who sets out on a mystical quest to recover some stolen seeds from a powerful elephant king. These segments, aside from being gorgeously animated, are where the fantastical elements are exclusively placed, while the main crux of the film is grounded in a much harsher reality; the contrast between the dark and unforgiving streets of Kabul, and the childlike cut-out style animations used in those vignettes, is noticeable, but it never ruins the overall tone and emotional factor that’s going on in the film’s reality. If anything, it works even better to showcase the storytelling talents of its filmmakers and other collaborators – The Breadwinner is actually an international co-production with Canadian studio Aircraft Pictures and Luxembourg’s Melusine Productions assisting Ireland’s Cartoon Saloon with its making – as well as highlight how the cultural limitations in this part of the world are so strong that children have to resort to telling fairy tales as a coping mechanism. It all leads to a conclusion that is as emotional and heartbreaking as anything else that Cartoon Saloon has put out there, and really shows how far they have come with only three films, including this one, under their belt.

It is also by far and away the studio’s most adult film to date, even though again the animation may give off the wrong idea that this is strictly for children, because it really isn’t. There are some very upsetting scenes involving the cruel treatment of civilians under Taliban control, including one where a character is mercilessly beaten to a point where it causes them severe depression afterwards; it also doesn’t shy away from how, at any given moment, people can be shot at, physically assaulted, taken from their homes, or treated like utter dirt for the thinnest of reasons, as this is a part of the world where danger lurks around every corner. Make no mistake, a children’s film this ain’t, but regardless the film should be applauded for not sugar-coating any of these atrocities, especially in a fully animated movie like this, and handles the subject matter more maturely and intelligently than most live-action movies about the topic.

Cartoon Saloon’s greatest triumph, putting aside from a moment the consistently breathtaking and imaginative animation it has to offer, is never letting its style get in the way of its substance, and every time the filmmakers manage to find a way to tell a beautiful story with well-rounded characters that even overshadow the wonderful artwork on display. The Breadwinner is no different, as it spends enough time on this young girl and her family to really allow you to develop a connection with them, and to see why she would go to such lengths to provide for them or, in her father’s case, release him from his unfair punishment. There’s a nice character arc involving her (in disguise as a boy) and one of the men who captured her father, as she reads him letters since he is illiterate and later teaches him to read and write, which helps them develop a bit of a special bond and even a redemptive moment by the film’s end. As ever, this studio never fails to impress with how it dedicates as much time to its story and characters as the ambitious animated visuals, and they are now three for three in delivering some truly outstanding work that doesn’t deserve to go under the radar for some.

Though, again, the market may be dominated by the likes of Pixar, I implore you not to let other animation studios like Cartoon Saloon go unnoticed, because they really are putting out some of the most imaginative, emotional, and beautiful pieces of work you can imagine, and The Breadwinner is only just proof that they need just as much attention.

The Breadwinner is a beautiful and emotional piece of animation by the always-great Cartoon Saloon, which highlights a heavy topic with great maturity and thought, while also balancing fantastical and realistic elements wonderfully.