The Boys in the Band (Review)

The Boys in the Band (Review) 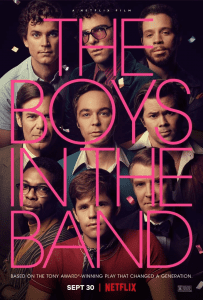 BASICALLY…: A group of gay friends meet for an evening of birthday celebrations and unexpected revelations…

Playwright Mart Crowley, who passed away last March, was an unexpected pioneer in the cultural acceptance of homosexuality; his 1968 play The Boys in the Band was, at a time when gay rights were merely a technicolour dream and even the very act of being gay was (in some countries) against the law or just barely decriminalised, a simply revolutionary depiction of gay life nobody had seen before on the stage. Not only that, but for the first time in any sort of media, gay characters were treated as complex and three-dimensional people instead of the flamboyant stereotypes so many people were used to seeing then.

Over fifty years since its stage debut, the themes and conversations about homosexuality and its place in the world are still considered to be hot-button issues in some parts of the world, despite all the progress that’s been made towards greater tolerance and overall embrace of the way of life in parts of Western culture. A film adaptation in 2020 – the second overall, following director William Friedkin’s 1970 version, itself considered a milestone in LGBTQ+ cinema – therefore doesn’t seem like such a bad idea, especially when the cast of the 2019 Tony-winning Broadway revival is brought on board to reprise their stage roles for director Joe Mantello (who also directed them on-stage) and producer Ryan Murphy. As it turns out, it was a fabulous idea, for this is a stunningly new version that shows how some plays, particularly ones with themes that people today can easily identify with, truly are timeless.

The film takes place over the course of an evening in a New York apartment in 1968; its owner, Michael (Jim Parsons), is hosting a birthday party for his friend Harold (Zachary Quinto), with all their friends – toyboy Donald (Matt Bomer), couple Larry (Andrew Rannells) and Hank (Tuc Watkins), sensitive African-American Bernard (Michael Benjamin Washington), and exceptionally effeminate Emory (Robin de Jesús) – coming over to celebrate. The night begins to take a surprising turn when Michael’s straight – or so he claims – friend Alan (Brian Hutchison) suddenly shows up, anxious to tell Michael something that’s clearly on his mind (what it is, exactly, we are never explicitly told), and as more and more alcohol is consumed the bitterness begins to rear its ugly head, culminating in a devastating party game that doesn’t end well for anyone.

Seeing the vibrant, out-and-proud attitudes of its ensemble of gay characters – all played by openly-gay actors, no less – feels just as refreshing as it must have felt back in 1968; they all exist in a world that simply hasn’t caught up to any of them yet, and at first you feel the strong harmony between them as they meet and greet each other, swapping harsh insults like playful banter, and even dancing in almost perfect sync to the lively records playing in the background. There’s no judgement to be made amongst any of them; they’re just a bunch of free-spirited gay men living it up in their own safe haven, and the direction as well as the performances make you feel comfortable and just as important a guest at this party like any of them are. Mantello, having worked with not just his actors but also this material before on the stage, gives Crowley’s words a surprisingly cinematic quality, even if it doesn’t always manage to shake off its clear theatrical roots (the singular location, the lengthy monologues seemingly playing out in real-time etc), and injects enough of a spark and a heavy dose of tension as the night grows darker and uglier amongst them.

These actors, too, are utterly sublime; Jim Parsons is fantastic in what is essentially the de facto lead, with barely a hint of his Sheldon Cooper persona on display (aside from a couple of inflictions every now and then), while Tony nominee Robin de Jesús is a scene-stealer as the campiest one of the bunch (and that’s saying a lot). Zachary Quinto, meanwhile, literally struts in as though he’s come from a completely different story, and he is mesmerising as someone who, despite it being his own birthday, simply does not give a damn. All the actors get their own mini-moments to shine, especially as it gets into the much more dramatic second half where all bets are off and the claws come out in force; scenes of high drama and furious resentment between characters make for a compelling watch, as issues such as prejudice and self-hatred come into fruition and are explored with the right characters, and with the right amount of depth that gives you everything you need to know while also leaving certain things intentionally vague.

Overall, it was a smart move to bring the late Mart Crowley’s play back into the spotlight, for today’s gay community faces extraordinary challenges in certain areas of society that are just as painful, if not more so, as they were fifty-two years ago. Intolerance towards people of differing sexualities is, sadly, still a major issue in some religious and far-right circles, who simply cannot comprehend that two men or two women can love each other in the same way that a man and a woman can, leading to a much bigger problem with prejudice in general. Something like The Boys in the Band is important for the same reasons it originally was in 1968; it shows that gay people are just as human as anyone else, and no amount of hatred or intimidation can take that away from them. It sucks that people still need to be reminded of this message today, but as we head towards an uncertain future, any reminder of common decency and tolerance to any minority, including the gay community, is warmly welcomed.

The Boys in the Band is a sublime adaptation of the classic, ground-breaking play by the late Mart Crowley, with an exceptional cast – Jim Parsons, Robin de Jesús and Zachary Quinto among the standouts – bringing its timely and timeless LGBTQ+-related themes back into the spotlight with great effort.