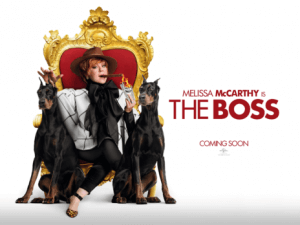 BASICALLY…: Industry titan Michelle Darnell (McCarthy) is imprisoned for insider trading, and upon her release vows to reclaim her place on top of the business world…

The last time that Melissa McCarthy teamed up with husband Ben Falcone in respective writer-star and writer-director roles, the result was the anti-comedy that was Tammy. Despite McCarthy’s efforts to bring her character in that film to life, even she was ultimately let down by a poor script and worse direction by then-newcomer Falcone which failed to find the right pace and tone for any of its attempts at humour to stick firmly to the wall.

Luckily, their second collaboration in these same roles is a much stronger effort by comparison – but The Boss still can’t make a lot of its jokes work or keep to a consistent story, meaning that it still fails to be anything more than passable.

McCarthy is Michelle Darnell, a character based on one she created for the Groundlings comedy troupe she once belonged to – she is an incredibly wealthy, ruthless and power-hungry businesswoman, basically Donald Trump without a penis and much better hair. Everything is going just fine for her, until she’s arrested for insider trading and sentenced to a few months in prison; upon her release, with nothing left of her savings or possessions, she ends up staying at the apartment of her former assistant Claire (Kristen Bell) and her young daughter Rachel (Ella Anderson). Eager to make her way back up to the top, she decides to start a brownie enterprise with several girls from Rachel’s Girl Scout troupe and Claire’s irresistible brownies, and as she becomes more of a success once again she learns the meaning of family and a lot of other stuff you’ve seen before and done much better.

Next to Tammy, this definitely feels more like a film; a lot of the scenes actually do tie more in together instead of being jumbled non-sequiturs, and there’s also a little more life to the jokes and characters here that was sorely missing from their last film. However, The Boss still falls extraordinarily flat when it comes to the comedy, which consists of a lot of ad-libbing and people being unpleasant to each other, which with a much stronger script could actually work but it really doesn’t. Outside of one or two chuckles, most of them coming from either McCarthy or Peter Dinklage hamming it up as a rival businessman/former lover (though it comes across as though Dinklage watched one too many Ben Stiller villain performances before playing this role), you’ll be sitting there mostly in silence which, especially for a comedy whose sole purpose is to make people laugh, is a serious problem for everyone from the filmmakers to the people paying to see the damn thing.

Some of the jokes or scenes of comedy just go on for far too long as well, like an extended scene of Michelle making fun of Claire’s nursing bra she’s planning on wearing for a date, or an early scene where Michelle has an entire conversation while wearing a mouth guard for no real reason other than the filmmakers thought it would be funny to have Melissa McCarthy wearing a mouth guard. They’re all moments of failed comedy that do sadly undermine the talents of the people performing it all for our pleasure; McCarthy arguably gives this character the time of day to develop and be a genuine presence and, as always, she ends up doing a great job despite the material, as do the likes of Bell, Dinklage and most of the other main players. But then you get characters and performances that are just merely cartoons instead of actual people, like Annie Mumolo as a bitchy mother with a serious grudge against McCarthy’s character, and even Dinklage threatens to lean more towards caricature with a slimy and over-the-top performance that at least he looks like he’s having fun with. We know that the idea is to present a heightened reality, as it is in most comedies, but when you have characters like these who are clearly constructed to give the main character someone to satisfyingly insult and nothing else, it’s a reality that just becomes too unbelievable as well as not that funny.

That’s ultimately the biggest problem with The Boss; for all its potential, the comedy just doesn’t work, no matter how much talent you throw into it. It’s a far better McCarthy-Falcone collaboration than Tammy, but really that’s not saying much.

The Boss is certainly a more complete Melissa McCarthy-Ben Falcone movie than Tammy, and McCarthy undeniably gives it her all, but even she is undermined by a script where the comedy just doesn’t work and fails to get many laughs outside of a few chuckles, despite the efforts of everyone involved.