The Boss Baby 2: Family Business (Review) – A Weird Movie Gets A Weirder Sequel 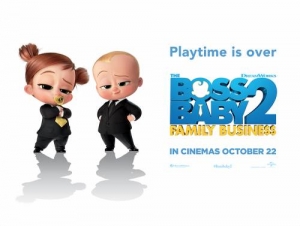 BASICALLY…: Estranged brothers Tim (Marsden) and Ted (Baldwin) must revert to their childhood forms in order to infiltrate a mysterious school…

Although it seems to be the butt of many people’s jokes, I honestly never thought that DreamWorks Animation’s The Boss Baby was ever that bad of a movie. It’s certainly an odd premise, told in an incredibly bizarre way, but there’s much to be admired in how much it embraces its identity as a cartoon, with slapstick and timing you’d find in an old Tex Avery short. The jokes don’t always land, but it’s the spirit that counts, and The Boss Baby has surprising ambition in both its comedy and its storytelling that gives it plenty of lasting power, even though it’s mostly used to put it down.

That being said, those who did not get on board with the madness the first time around may struggle a little bit with The Boss Baby 2: Family Business, the sequel which is only now getting a UK theatrical release three months after its Stateside debut. Those who were more forgiving, however, may get along with this one just fine, for like the first film this is a very energetic and delightfully weird cartoon that has more imagination and even intelligence that might seem apparent at first glance.

The sequel takes place thirty years after the events of the first film, with Tim Templeton (James Marsden) now an adult with a family of his own, including intelligent young daughter Tabitha (Ariana Greenblatt) and baby girl Tina. However, Tim is somewhat estranged from his younger brother – and the former “Boss Baby” of the title – Ted (Alec Baldwin), who has gone on to become a wealthy CEO who’s all work and no family – but when Tina (Amy Sedaris) introduces herself as a new Boss Baby sent in to investigate Tabitha’s strange prep school, run by the mysterious Dr. Erwin Armstrong (Jeff Goldblum), the two brothers must work together once more. This involves them drinking a special formula that transforms them back to their child selves, and sneak into the school and find out Dr. Armstrong’s nefarious plan which, to say the least, goes along with all the other crazy stuff in this movie.

And boy, does this movie lean heavily into the crazy stuff. As with the first Boss Baby movie, Family Business is the kind of weird, crazy cartoon that Tex Avery, Ralph Bakshi and the animators on the Pink Elephants sequence from Dumbo all probably had fever dreams about, with the insane imagery including, but is most certainly not limited to, talking wizard alarm clocks, intense dream sequences, a destructive pony ride through town, dystopian schools where “time-out” is a form of psychological torture with Enya constantly on loop, apps that turn parents into zombies, and a villain who I cannot even begin to describe because you just need to see it in order to ascertain what in the holy hell it is. It is by all means a cavalcade of madness for the sober and mature-minded, but honestly there is something fascinating about how far these movies tend to go with their wild cartoon imagery, stretching themselves like bouncy Play-Doh in terms of rapid-fire physical humour, and unapologetically going for the bizarre rather than play things a bit more safe and sensible. This movie is certainly aiming for that threshold too, and while I can’t say that it’s quite on par with the first one – that film had more of a grounded plot, whereas this one is a bit more all over the place – the fact that one can legitimately watch two, let alone one, Boss Baby movies and be fascinated by their insanity instead of being put off by them, is honestly miraculous.

Although, there is some fun stuff to compliment this movie for, beyond the craziness of the plot. Its humour, much like the first, can be hit and miss – in an early meta moment, characters even comment on the jokes of the first – but there are some pretty funny moments which did get a good chuckle out of me. The animation in this movie is also top-notch, particularly how it is directed to deliver so many gags at one time and still feel like it’s got a certain endgame (its director, Tom McGrath, also helmed the Madagascar movies for DreamWorks, which also heavily embraced their cartoon identity), and the voice actors – particularly Jeff Goldblum whose trademark deadpan delivery makes for wild hilarity when paired with such weird lines and imagery – are all clearly having fun bringing these characters to life. Younger kids will definitely be entertained by this movie, if the cackling children in my screening were any indication, though again I can easily see and understand adults being more annoyed or even terrified by the weird stuff they’re watching here.

It never really bothered me, because that’s the identity that the Boss Baby movies have established for themselves, and like them or not you have to admire how all-out they go to preserve that mad identity with each passing entry.

The Boss Baby 2: Family Business is a wild and crazy sequel which kids will definitely enjoy more than most adults, but for those willing to put up with insane imagery there is a surprising amount of fun to be had from how mad the plot and characters get.

The Boss Baby 2: Family Business is now showing in cinemas nationwide – click here to find a screening near you!