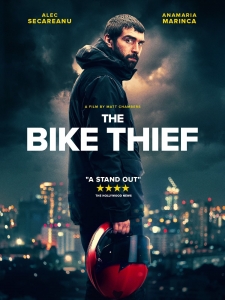 BASICALLY…: When a delivery driver (Secareanu) has his prized moped stolen, he sets out to get it back…

Don’t be fooled by the trailer for The Bike Thief, which suggests that this is some sort of revenge thriller in the vein of Drive. In fact, it couldn’t be any more misleading; the film, written and directed by Matt Chambers in his film debut, is actually a much quieter, surprisingly less eventful study of the modern British immigrant experience, and the economic fragility that comes with trying to earn a living in this post-Brexit society. On top of that, it is also a homage/loose remake of the classic Italian film Bicycle Thieves, which is often said to be one of the most influential movies ever made.

Not once does the trailer even hint at any of that, but in all fairness this is a very difficult film to market towards audiences. How do you effectively sell a movie where, when you really break it down, very little happens during its short 71-minute run-time, and taps into social themes that casual viewers might not be so intrigued by? Even its connection to Vittorio De Sica’s late-40s neorealist masterpiece is tricky to sell, because its fan base is very niche and centres around a film that sadly not many people know even exists.

It’s a far cry from the intense encounters that the brief promo appears to promise, but misleading marketing aside the movie really isn’t as bad as I’m probably making it out to be.

The film stars Alec Secareanu (of God’s Own Country) as the nameless Rider, who works nights delivering pizzas on his prized scooter for a small London takeaway. He lives in a small flat with his family, including his wife Elena (Anamaria Marinca, whom fans of Romanian cinema will recognise from the Palme D’Or-winning drama 4 Months, 3 Weeks and 2 Days) who works during the day as a cleaner, while he sleeps to stay more awake at night. After a normal shift, however, the Rider finds that his scooter has been stolen, which is of great concern to him for many reasons; for one, he won’t be able to work and thus not be able to afford rent for his family’s flat, and that’s not even mentioning the fact that it hasn’t been insured by the pizza shop owner.

However, instead of spending the rest of the film stalking the streets of London hoping to find the bike and deliver justice to its thief, the Rider just kind of doddles about for most of it, only occasionally setting out to recover his bike – or even someone else’s – in order to get his career back on track. The film even takes its sweet time before the bike is even stolen, which only happens almost half an hour into this 71-minute movie, as we see a fair chunk of the main character’s life during and outside his work; we quickly deduce that he’s quiet, keeps to himself, and like most concerned parents is distrustful of a local friend of his teenage daughter, but there’s nothing to suggest he has any real life outside of his job and family, and it would be somewhat understandable if someone was to see this and not get all that into this bare-thread plot and its even barer lead character.

However, as the drama it most certainly was not advertised as, The Bike Thief a decent affair. There’s an observant manner to Matt Chambers’ writing and direction, letting us see how people like the Rider and his family attempt to earn their way through life instead of a more traditional arc-driven plot which would normally just be about this guy simply getting his bike back and exacting revenge on those who took it. The point doesn’t seem to be so much that this guy has just had his livelihood taken from him, but that he and his family are stuck in such a low status due to their immigrant origins that something as minor as a moped for a pizza delivery company is considered a livelihood in the first place. Chambers is able to raise some concerning issues for the thousands of migrants living in London without drawing too much attention to them, in a story which on surface level definitely feels light but upon digging further down is more rich with socio-political themes than one might realise.

Chambers’ writing and direction, however minor, is decent enough for a first-time feature filmmaker, minor setbacks aside (its slow pace can easily test impatient viewers, and an abrupt ending wraps things up in all too convenient a bow), and lead Alec Secareanu delivers a quiet, unshowy turn that makes up for his character’s otherwise lacking substance. They’re just a few of the positives in a film that might not seem especially layered at first glance, but eventually you do find there’s a bit more to The Bike Thief’s intentionally blank nature – even if you’re still disappointed about not getting that intense thriller the trailer falsely promises you.

The Bike Thief is a much lighter and more observant drama than the more intense trailer perhaps suggests, which doesn’t always equal satisfying entertainment, but there are decent things to it such as an unexpected focus on the tribulations of immigrant lifestyles in London as well as some good debut filmmaking by writer-director Matt Chambers.

The Bike Thief will be available to rent or buy on digital platforms, including Amazon Prime Video, from Monday 3rd May 2021.