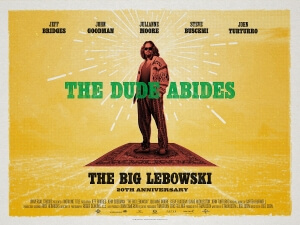 BASICALLY…: When slacker Jeff “The Dude” Lebowski (Bridges) is mistaken for a rich philanthropist with the same name, he unwittingly becomes involved in a kidnapping plot…

Twenty years ago, the Coen Brothers unveiled their much-anticipated follow-up to their awards behemoth Fargo, only for people to immediately be confused by what they saw. Right off the bat, reviews for The Big Lebowski were rather unkind, with many calling it a major disappointment for the filmmaking siblings especially after something as universally acclaimed as Fargo, and as a movie in its own right was a strange and downright bizarre comedy that was seemingly without purpose or intent.

But as we all know, the film has gone on to become not only one of the Coens’ most beloved movies in their filmography, but also one of the most talked-about and analysed cult movies of all time, with several books being written about its deeper philosophies and meanings, several online memes inspired by its numerous quotable lines, and even an entire festival where people have dressed up in character as many of its colourful and extremely odd set of characters. The lead character of Jeff “The Dude” Lebowski has also become lead actor Jeff Bridges’ signature role, the one that most people remember him for out of a long history of memorable performances throughout his career, and the one that everyone to this day likes to quote every now and then.

I first saw this movie ten years ago when I picked up a DVD celebrating its 10th anniversary, and at the time I found it to be a funny, delightfully oddball movie with lines I ended up quoting for days, as well as an appreciation for the low-aiming but content lead character that, again, Bridges has become known worldwide for. Today, though, upon looking back on the film as it reaches its 20th anniversary, there are several things that still stand out to me, which got me thinking about how much of a cultural impact it has had in its two decades on this Earth. The film is still as clever, dark, and often hilarious as I remember it being, but now that I am fully grown and making my own life decisions I found myself drawn to this movie even more for several unexpected reasons, which is partly why I’m doing this review, so I can explore what The Big Lebowski has to offer in this day and age, as well as whether it has influenced my own life in any way.

A quick synopsis, for the uninitiated: Jeff “The Dude” Lebowski (Bridges) is a jobless slacker who spends his days getting high, wandering to supermarkets in only his dressing gown, and frequently bowling with his friends, the short-tempered Walter (John Goodman) and the fascinating non-character that is Donny (Steve Buscemi). One night, the Dude is confronted in his home by a couple of thugs demanding money, urinating on his beloved rug (it “really tied the room together,” he moans) in the process; however, when it is revealed that they have mistaken him for another Jeff Lebowski (the late David Huddleston), this one being the seemingly-wealthy philanthropist, they leave which in turn leaves the Dude wanting compensation for his soiled rug. Wanting nothing more than a new rug, the Dude soon wanders into a much larger plot that involves the kidnapping of Mr. Lebowski’s young wife Bunny (Tara Reid), a group of German nihilists, pornography producers, stolen cars, Lebowski’s artist daughter Maude (Julianne Moore), and several other strange detours that only the likes of the Coen brothers could come up with.

The things I love about this film are probably the same things that you love about it; it’s a hilarious script with endlessly quotable lines and characters who redefine the word “quirky”, not to mention how this is a plot that is pure Coen Brothers, in that it establishes so much in this small crazy universe but amusingly delivers very little payoff by the end of it. There are so many things that could have been erased from this movie altogether, such as the now-infamous dream sequences, the various sub-plots, or at least a handful of the characters who either contribute nothing or very little to the actual story – I love how Buscemi’s Donny is just kind of there, as someone who doesn’t add anything but still butts into the conversation every now and then to remind us that he’s there for some reason – but the truth is, you take any of that away and the movie would lose a great chunk of what makes it so special. The movie thrives on being such a strange and surreal set of circumstances, quite possible some of the most surreal that the Coens have ever produced, that there’s a certain charm to it which is unlike most films you get nowadays, even ones by Joel and Ethan Coen. The laughs usually hit bullseye, the performances all across the board are memorable and iconic, Roger Deakins’ cinematography is understated but simple and effective, and the plot, as odd as it can get, is one hell of a ride you don’t want to get off of; make no mistake, The Big Lebowski is considered a classic for a reason.

But going back to my original point, what is it about the film that has made it last this long in the public subconscious? How has it had such a major impact on film culture to a point where people are throwing festivals in honour of it, and quoting lines from it in their everyday vocabulary? More importantly, in what way has the film become a cornerstone for myself and the many other film buffs out there? Truth be told, there is no one definitive answer; some see it as a way to rationalise their laziness and slacker attitudes that the Dude so unashamedly exhibits, some view it as a contemporary pastiche of the detective novel structure popularised by Raymond Chandler, while others have even read deep into its meanings and genuinely found some sound philosophical advice that’s on the same level as Socrates or Aristotle. There are just so many opinions on this one film as to why it stands the test of time even twenty years down the line, and to be honest that’s what I personally get out of it; it’s extremely rare that a movie like this comes along and has EVERYBODY talking about it, regardless of what philosophical intellect they may have gotten from it, if any at all. The fact that this one film, about a loser whose rug gets peed on in the opening scene, has become part of the contemporary film conversation  in more ways than one is a baffling, but positively so, thing to comprehend, but because there is something to say about almost every scene in this, from things in the background to some of the style choices in the dream sequences, it makes it a movie that’s truly one of a kind, one that’s beloved by so many people that they continue even to this day to analyse deeper meanings and make complex philosophical arguments from it. The best works of art have people discussing it for decades after it was first introduced, and The Big Lebowski is the one film I can think of that has remained such an approachable topic of discussion about its artistic and philosophical merits before it has even reached drinking age. That’s what I admire the most about this movie, that aside from being an extremely funny and smartly-written movie it is also one that stands the test of time because so many people are talking about it in ways that will never get boring.

Now that is something, like the Dude himself, I can abide.

The Big Lebowski is still a classic entry by the Coen Brothers even twenty years on from its original debut, retaining the hilarious and intelligent writing as well as Jeff Bridges’ iconic performance as the Dude, but looking back on it I admire even more how it’s a film that people are still talking about due to its many artistic, and even philosophical, tendencies.

Did you like this retro review? Would you like me to tackle more past movies in the future? Let me know in the comments below if there’s anything you want me to review next time!