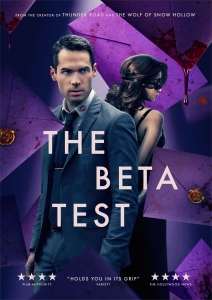 BASICALLY…: A Hollywood executive (Cummings) receives an anonymous invitation to a sexual encounter…

There’s no denying that Jim Cummings (no, not the legendary voice actor) is one hell of a hard-worker. The multi-hyphenate filmmaker – who has written, directed, produced, edited and starred in a number of short films and features such as Thunder Road, an expansion of his award-winning short of the same name, and last year’s well-received comedy-horror The Wolf of Snow Hollow – has rightfully earned a following for his refreshingly DIY approach to independent movie-making, a trait which now continues with his latest film The Beta Test, which marks a significant milestone for Cummings in multiple ways.

For one, it’s the first time he’s shared directing, writing and even starring credits with someone else – that someone being PJ McCabe, an actor who also appeared alongside Cummings in The Wolf of Snow Hollow – but The Beta Test also finds him tackling some highly relevant themes with a surreal and biting satirical edge, putting him in a similar category as auteurs like David Lynch and David Cronenberg. Their respective Mulholland Drive and Maps to the Stars are clear influences on Cummings and McCabe’s work here, and it helps that The Beta Test serves as an appropriate companion piece to form an unofficial trilogy about the darkness at the heart of Hollywood.

The film focuses on Hollywood talent agent Jordan, played by Cummings, who certainly acts the part of the suave and business-savvy shark down to a tee, except he’s unable to admit that he’s a relic from a dying era in the industry, which is rapidly moving on from the toxic mentality and corporate greed that has been stained by the likes of Entourage and Harvey Weinstein. One day, Jordan – who is shortly due to wed his fiancé Caroline (Virginia Newcomb) – receives a mysterious letter in the mail, inviting him to an anonymous sexual encounter in a hotel room, which he accepts after letting curiosity get the best of him. Soon after, Jordan becomes paranoid as he and his buddy PJ (McCabe) try to figure out not only who the anonymous woman was who he engaged with (the two of them wore blindfolds the whole time), but who exactly is sending out the invites in the first place, which has resulted in a lot of cheating lovers being brutally murdered by their vengeful other halves.

Cummings and McCabe’s joint effort is a peculiar beast to watch, for it has heavy ambitions of wanting to comment on not just the seediness and corruption of Hollywood players in a post-#MeToo climate, but also the worrying nature of social media conglomerates and their targeting of people using data algorithms, all within a thriller setting that plays heavily on the protagonist’s paranoia and the surreal, almost nightmarish landscape it presents. The Beta Test attempts to juggle all of these things at once, not always successfully (and certainly not in the subtlest of fashions) but enough to at least give the viewer something to think about, particularly in regards to how they ultimately serve a much more harrowing prophecy of things to come in such a society. It is a film with a lot on its mind, and both the script and direction by Cummings and McCabe get as much out of their multiple commentaries as they can without going too overboard with some of the humour and even instances of extreme and shocking violence littered throughout.

On-screen, Cummings delivers a magnetic central turn which can best be described as though Patrick Bateman worked for the firm from In the Company of Men (the actor has plenty of moments where he gets to revel in his character’s blatant assholery by screaming at innocent female assistants and using his faux-power status to check security camera footage in his building), and while McCabe’s role is much smaller by comparison, he too has fun playing into toxic industry stereotypes once glorified by Entourage. Their eye for handy mise-en-scène helps their performances even more; like in Mulholland Drive, there is always something off-putting about the juxtaposed sunny Californian backdrop against the dark and sinister plot happening with these (intentionally) horrible characters in the foreground, with scenes set in swanky restaurants or shots of nice hillside villas constantly hinting at a much more brutal truth behind the glitz and glamour. The way that the actors are blocked and lit amidst all of it makes them look like they’re about to leap into a psychological killing spree at any moment, adding to the sinister and bizarre nature of both this cutthroat industry and the seedy underworld that the film is attempting to spotlight.

Occasionally heavy-handed, but always gripping, The Beta Test is a fascinating attempt to deconstruct a bygone era of Hollywood business with fierce bite and confidence in its hard-hitting themes. In other words, Cummings has just about done it again.

The Beta Test will be released in cinemas nationwide on Friday 15th October 2021 – click here to find a screening near you!