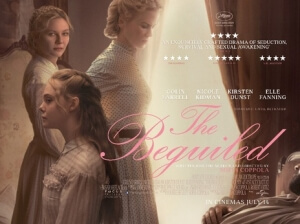 BASICALLY…: At an all-girls school in Civil War-era Virginia, an injured Union soldier (Farrell) ensnares the affection and deadly attributes of its inhabitants…

Sofia Coppola has rightfully earned her place among the ranks of her filmmaking family, from her father Francis Ford Coppola to  her screenwriter brother Roman Coppola to her actor cousins Jason Schwartzman and Nicolas Cage (yeah, the Coppola family tree is quite lucrative, as it turns out). With films like The Virgin Suicides and Lost in Translation under her belt (the latter of which she not only earned an Oscar for Best Screenplay, but also became the first American female director to be nominated for the Best Director prize), and many other noteworthy additions including, of all things, a Netflix Christmas special with Bill Murray, Coppola’s films usually come with a bit of fanfare nowadays as she has quickly become a favourite amongst film fans for her grounded and beautifully retro vision.

And, as it so happens, she has a new film out which is also pretty good.

The Beguiled, both an adaptation of the similarly-titled novel by Thomas P. Cullinan, and a loose remake of the 1971 adaptation that starred Clint Eastwood, is set in Civil War-era Virginia, at a girls’ school that has been virtually abandoned by all but a handful of teachers and students. Among them is their headmistress Martha Farnsworth (Nicole Kidman), teacher Edwina Morrow (Kirsten Dunst), and students that include Alicia (Elle Fanning), Jane (Angourie Rice) and Amy (Oona Laurence), who all spend their days alone and restlessly bored. However, when Amy comes across injured Union soldier John McBurney (Colin Farrell), she brings him to the school where his leg is tended to with what little medical experience the teachers have. Naturally, his sudden arrival has everyone, even Morrow against her better judgement, pining over him like – what else – schoolgirls, as to them he represents a much needed change to their quiet existence as well as a natural sexual curiosity; and given how charming and charismatic he seems to be, nobody can blame them.

And then, just when the film lulls you into a false sense of security, it takes a turn that changes the tide quite drastically, and suddenly tensions build that might have some extremely concerning consequences. That’s one of the many strengths about this movie, in how it manages to completely surprise you at almost every turn, and it turns into something you weren’t entirely suspecting when you get to that point in the film. Coppola is so good at building tension here, and part of that has to do with the eerie and moody atmosphere it establishes throughout, from the gothic interiors of the school house to the faint sounds of battlefield explosions far away in the distance, and a lack of a musical score in the film’s first half really forces you to take in this unnerving environment in all its natural glory, without the aid of accompanying music. There is always that overwhelming feeling of dread and uncertainty, even in scenes where nothing sinister is actually happening, and when the sinister moments do hit, they can be some of the most unnerving and downright scary character moments you’ll see all year; this isn’t even a horror film, yet it more frightening than a lot of the actual horror films so far this year.

The film is a slow-burn, clocking in at only 94 minutes but taking its sweet time to set up characters and once again establish that unnerving atmosphere. Coppola has yet to make a film that hasn’t been completely astonishing in its craftsmanship, with the cinematography, costume and set designs, and the acting all coming together to make quite possibly her most visually accomplished film to date (but not necessarily her best; Lost in Translation still holds that title). Farrell in this movie is both incredibly charming but on the flip of a dime can get truly terrifying, and when that happens it doesn’t feel entirely out of character, especially when you know the context of why he would do so; and while all the actresses do a fine job here, it’s Dunst who really comes into her own here as someone fighting her own inner desires but still maintaining that proper Southern hospitality. Having worked with Coppola thrice before, in The Virgin Suicides, Marie Antoinette and a cameo role in The Bling Ring, it’s clear that by this point she entirely trusts the director to guide her through this character’s subtle but nonetheless difficult journey, and she pulls it off spectacularly.

I would say that if you’re not entirely a fan of films that take their sweet time with their pacing like this movie does, then you might find yourself a little agitated at its slowness, and the ending may tend to leave you feeling a little cold or maybe even underwhelmed. But they were never really problems for me, and as a whole I found this to be a very strong and passionately made period piece that’s very different to anything else that’s playing out there right now. I haven’t seen the 1971 version or read the original book, but if I were to compare it with another recent dark costume drama, I honestly preferred Lady Macbeth a little more than this film, but that’s just because I thought that film came almost out of nowhere to wow me, and even when I went in to see this I knew I was going to like The Beguiled, mainly because Sofia Coppola is a damn great director, and no matter what I would be endlessly fascinated by it. Luckily, I was, and I thoroughly enjoyed every moment of it.

The Beguiled is a very effective period piece that is passionately made by writer-director Sofia Coppola, with everything from the gothic sets to the creepy atmosphere to the great acting all around perfectly establishing a sinister mood that you can’t shake no matter what may or may not be happening in the scene, and is a firm reminder that Coppola is one of the finest directors working today.