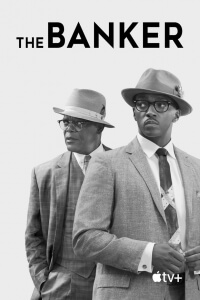 BASICALLY…: Two African-American businessmen (Mackie and Jackson) hire a working-class white man (Hoult) to pose as the head of their business empire…

As the world suddenly turns to streaming more than ever, the timing couldn’t have been more perfect for Apple to launch its first original film on the company’s new service Apple TV+, following the successes of TV series like The Morning Show and Dickinson. As it so happens, their pick for the first film to be distributed by them is Oscar-calibre material – or at least, it would have been had it originally been released late last year as planned. Those plans were abruptly pushed back when serious allegations came out against Bernard Garrett Jr., a producer on the film as well as the son of its main subject, and since then the filmmakers have come under fire from the subject’s family members for inaccuracies in the way this particular story unfolded.

Whether or not you choose to take everything that The Banker does with a pinch of salt because of these setbacks, you’re still in for a decent, if somewhat safe, look at a remarkable story told as efficiently as possible.

Taking place primarily in the 1950s and early 60s, African-American businessman Bernard Garrett (Anthony Mackie) sets out to carve his name into Los Angeles real estate, but finds it difficult to secure funding for his endeavours because not many windows are open to him and other people of his skin colour. Teaming up with wealthy entrepreneur Joe Morris (Samuel L. Jackson), they hatch a plan to buy the building that the LA banks operate in, thus obtaining financial guarantees; to do this, they hire a young white man named Matt Steiner (Nicholas Hoult) to act as the face of their business, and soon all three of them find great success. However, things become complicated when Garrett decides to bring his business to the segregated Texas town where he grew up, in a bid to give several coloured citizens the same financial opportunities as white people.

It’s a noble story that’s ripe for cinematic treatment, and for the most part the film tells it fairly well. However, it does have a few teething problems before it eventually finds its groove, particularly in the first twenty to thirty minutes where the overall vibe seems slow and somewhat lifeless; things thankfully pick up a little further into the story, but the unfocused pacing and odd lack of intrigue during those opening scenes don’t especially set a high standard for what follows. To his credit, director George Nolfi – who previously directed Mackie in the underrated Philip K. Dick adaptation The Adjustment Bureau – makes up for the bland opening with a sharp injection of life provided by its three lead actors; Mackie and Jackson share an electric chemistry together, while Nicholas Hoult has some very good moments as the humble guy roped into their scheme, and all of them end up bringing a bit of swagger and sophistication to what might otherwise have been stock parts on paper. They alone make the film a worthwhile watch, because you’re invested in their confidence and dedication towards what they do, which itself makes you interested in how it plays out in this storyline.

The film certainly has good intentions, especially in highlighting how hard it could be for black entrepreneurs at the time to even get their foot in the door, though it could have used a little more depth in its handling of certain themes. It is a light film, designed to be an easy crowd-pleaser more than anything, so it doesn’t dive too heavily into topics such as discrimination and inequality, instead skimming along their surfaces by bringing them up in conversations but not going any deeper than that. As such, it probably won’t win over people looking for something with more substance surrounding this kind of story, especially the people who heaped all that negativity around Green Book simply because it, like this movie, didn’t go far enough into examining race relations at the time (for the record, I liked Green Book – probably a little more than this movie – but to an extent I can see where they’re coming from). Some audiences might get a little lost in the middle of the complex mechanisms when it comes to discussing this area of business; I’ll admit that even I struggled to keep up with the maths of it all, even though the film does try and simplify it so that nearly anyone watching can understand it too.

As for the furore from the people claiming that this movie is not true to life, it’s a tricky situation because while the filmmakers clearly executed artistic license upon their film which is unlike a lot of real-life stories adapted into movies, it makes things difficult when you go into it with the knowledge that not everything you’re about to see is accurate to the truth, which can be distracting as you’re constantly wondering which parts were real and which were just made up. The movie did a fine enough job with telling this particular story that I wasn’t paying it too much attention, but that’s not to say the thought was gone entirely, and the way that some scenes are played out make it feel awfully like one of those fake movies-within-a-movie where they’re trying to tell an important real-life story in a very safe, non-threatening way.

By all means, check it out if you’re curious because it does have some good qualities to it – but don’t expect it to change your life in any way afterwards.

The Banker is a decent telling of the remarkable true story at its core, albeit in a pretty safe and light manner that prevents it from being deeper than it possible could have been.