The Banishing (Review) – Neither Of God Nor The Devil 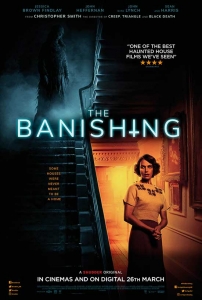 BASICALLY…: After moving into a town manor in 1930s England, a reverend’s wife (Findlay) begins to experience some disturbing activity around her new home…

The story behind Borley Rectory, the manor house once dubbed the UK’s most haunted building until its demolition in 1944, forms the basis for director Christopher Smith’s supernatural chiller The Banishing, but from the offset you’d swear that the filmmaker also watched a lot of haunted house movies in general, from The Amityville Horror to Insidious, for further inspiration.

Although Smith’s film is an atmospheric, chilling and very well-made horror which you’d expect from the director of Creep and Severance, the script by David Beton, Ray Bogdanovich and Dean Lines ultimately struggles to stand out as anything other than an above-standard haunted house flick, with a slight air of silliness about it.

Set in the late 1930s, with Britain on the verge of declaring war against Germany, the film sees a new vicar, Linus (John Heffernan), move into a stately Essex manor with his wife Marianne (Jessica Brown Findlay) and her illegitimate daughter Adelaide (Anya McKenna-Bruce). We very quickly learn that this manor was three years earlier the scene where, in true Amityville fashion, the previous vicar brutally murdered his family after apparently going mad, but that hasn’t stopped local bishop Malachi (John Lynch) from putting the new vicar and his family up in the place, to the grave concern of nearby occultist Harry Reed (a fictional version of real-life psychic researcher Harry Price, played here by Sean Harris). Of course, it doesn’t take long for Marianne to realise that there are some very strange and decisively supernatural things occurring in this house, and as both her daughter and her religiously-stifled husband slowly fall victim to its dark history, she and Reed must confront the horrors surrounding the true nature of what’s lurking about.

While it is very clearly inspired by the legend of Borley Rectory, The Banishing goes very much in its own direction with a plot that involves creepy mirror reflections, torturous monks, and even Nazi necromancy (the latter being one of the few plot points that are introduced only to go absolutely nowhere). However, it’s a script that often finds difficulty to hold everything together in place, which for something that has three credited writers shouldn’t have been this hard to manage, and often you can feel the meat just falling straight off the bone as the film continues struggling with sudden developments that seem to come out of nowhere. This is the kind of horror film where characters will come face to face with visions that are clearly being manipulated by disturbing forces at play, and then the very next scene will show them carrying on as though nothing sinister had just happened. It is a rather creaky script, which admittedly tries hard with its more interesting themes of religious oppression and female expectations (Marianne is often outspoken about the current rise of nationalism across Europe, which does not fall in line with some people’s expectations of a vicar’s wife), but ultimately succumbs to the expected traits of the typical haunted house movie without having a tight enough script to warrant some of its more ambitious ideas.

However, it doesn’t stop the film from still having some rather admirable filmmaking qualities all over it. Christopher Smith’s direction is highly astute, reserving some of the bigger frights for when they’re needed as opposed to dropping one in every five minutes, and the film is extremely well-shot with crisp, clear cinematography by Sarah Cunningham that dares to get creative with some of its visuals. The acting is top-notch, too, from Jessica Brown Findlay’s quietly compelling lead turn to John Heffernan as the film’s designated wet blanket, although it’s hard to tell what Sean Harris was going for here as his performance is hugely over-the-top right down to his flamboyant dress sense which, even for this time period, feels wildly out of place.

Those who enjoy haunted house chillers will no doubt find some enjoyment here, including how well it is made in spite of its much clunkier script, but if it’s a truly disturbing religious-themed horror that you’re after, then go and seek out Saint Maud which, by all accounts, is a much more original and even scarier film than The Banishing, an otherwise fine but forgettable tale of the unholy.

The Banishing is a mostly standard haunted house movie which is very well made and shot by director Christopher Smith and cinematographer Sarah Cunningham, not to mention well-acted by the likes of Jessica Brown Findlay, but the script often struggles to hold all of its ideas together in one place before ultimately succumbing to a number of typical genre tropes.

The Banishing is now available to rent or buy on digital platforms, including Amazon Prime Video.