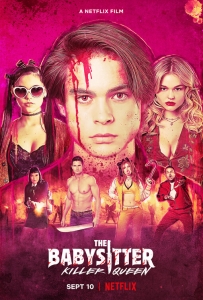 BASICALLY…: When enemies from his past unexpectedly resurface, Cole (Lewis) must defeat them once and for all…

Sequels to cult movies, especially comedies, rarely live up to the original; you get the odd Anchorman 2 every now and then (and from what I hear about Bill & Ted Face the Music, it’s a delight), but for the most part follow-ups to Zoolander, Hot Tub Time Machine, Super Troopers and more have failed to recreate what made the original so special.

The cycle now continues with this new sequel to The Babysitter, an underground Netflix hit back in 2017 which, while not especially great, made the most out of its simple premise – a young boy’s babysitter turns out to be part of a Satanist cult – and kept things relatively tight. The Babysiiter: Killer Queen, on the other hand, is an atrocious follow-up; forced, awkward, and wildly more annoying, this is a laugh-and-scare-free zone where you’re a lot more annoyed by how much they’re screwing up than genuinely invested in any of it.

Taking place two years after the original, Cole (Judah Lewis) is now in high school, where he is still dealing with the trauma he went through during the first film, which nobody believes actually happened (despite a fair amount of evidence left behind during the previous movie’s climax). To help him ease up, best friend Melanie (Emily Alyn Lind) whisks him away to a canyon retreat for some fun, but soon discovers that his babysitter’s former lackeys – psycho Sonya (Hana Mae Lee), ditzy Allison (Bella Thorne), wisecracking John (Andrew Bachelor) and shirtless Max (Robbie Amell) – have somehow come back from the dead, and are after Cole’s blood for a ritual to stay alive. Cole, along with troubled new teen Phoebe (Jenna Ortega), must now survive the night and also take care of his would-be killers once and for all.

The first film, as dumb as it got, at least had a level of genuine charm thanks to lead actress Samara Weaving’s charismatic turn as the evil titular babysitter, and Brian Duffield’s script which despite its hit-and-miss humour had a few solid moments of legitimate warmth. At least one of those elements does not return for this movie, and their absence is sorely felt in a film which bastardises a lot of what made the previous film work in the first place, whether it’s the over-the-top violence and humour (both of which here goes way beyond the realm of possibility to a point to where it practically becomes a cartoon) or entire characters, with one particular major figure carried over from the first revealed to be something which not only comes out of nowhere, but also goes completely against everything they were set up to be last time. It will also give minor characters such as Ken Marino’s doting dad a lot more screen time for no good reason, except to pad out the running time with one unfunny scene after another; there is a moment when everything stops dead just so it can cut to a scene of Ken Marino smoking weed, in a scene that’s dangerously close to Transformers: Revenge of the Fallen territory regarding parents of main characters consuming pot. Hardly any of it raises a laugh, because it feels so forced and disingenuous, and the comedic timing of a lot of the actors is either wildly off-base or desperately in need of being reigned in; this all makes it a really irritating movie to watch, since it’s not only unfunny but it’s also incredibly obnoxious to find even remotely charming.

This is also one of those sequels that takes whatever worked about the first film – whether it’s stylish character intros or pop-culture references – and multiplies it by eleven-thousand, even when it doesn’t make sense for the moment. Again, the first movie worked those things in a lot tidier than this, which just does whatever it wants without anything to back it up; for example, a couple of dialogue scenes between characters are done with them in regular motion while everyone and everything around them is in slow-motion, for no reason since it doesn’t contribute to anything going on in the actual moment; there’s another moment where a fight scene just turns into a Mortal Kombat-style video game, again for no reason other than director McG is under the false impression that he’s Edgar Wright or Danny Boyle all of a sudden. The soundtrack, as well, is out of control (and not in a good way); like the first, it’s made up of mostly 80s hits to give it a feel of a classic slasher-type movie from that era, but here it feels so lazily put together, like they just hit shuffle on their 80s music playlist whilst in the editing room. This is a movie that has such little faith in both the audience and its own scenes, that it plays Tangerine Dream’s “Love on a Real Train” a total of three times during some of the more dramatic moments, to a point to where the synth rhythms in the song are actually louder than the actual dialogue we should be paying attention to.

It’s an annoying, unfunny and even insulting follow-up to a movie which wasn’t even all that great to begin with, but is still leagues ahead of this because it at least felt genuine in its stupidity; this movie is just a cynical cash-grab, made solely to capitalise on the underground success of that first film, and takes it in absolutely zero worthwhile directions while lowering its own standards as the cheap, lazy and soulless sequel a movie like the original doesn’t deserve, not even as a sick joke.

Much like all the other cult favourite originals all these sequels are based on, you’re better off just watching the first film, and then pretending this follow-up doesn’t even exist.

The Babysitter: Killer Queen is a lazy, charmless and annoying follow-up to the underground Netflix hit, where none of the laughs or scares leave a mark nor does it have a style that’s used to as fun an effect as before, rendering this nothing more than a cynical attempt to cash in on the first film’s growing cult status.

Want to decide what the movie’s like for yourself?
Check out The Babysitter: Killer Queen streaming links
via